The New Zealand Census of Population and Dwellings (Māori: Te Tatauranga o ngā Tāngata Huri Noa i Aotearoa me ō rātou Whare Noho) is a national population and housing census conducted by government department Statistics New Zealand every five years. There have been 34 censuses since 1851. In addition to providing detailed information about national demographics, the results of the census play an important part in the calculation of resource allocation to local service providers. 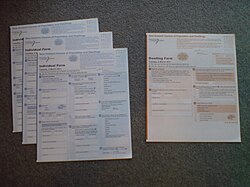 Forms that were intended for the (cancelled) 2011 census. To the left, the forms for individual persons surveyed; to the right, a form for the overall household. The 2013 census forms are identical, save for different dates.

Since 1926, the census has always been held on a Tuesday[2] and since 1966, the census always occurs in March.[2] These are statistically the month and weekday on which New Zealanders are least likely to be travelling. The census forms have to be returned by midnight on census day for them to be valid.

Until 2018, census forms were hand-delivered by census workers during the lead-in to the census, with one form per person and a special form with questions about the dwelling. In addition, teams of census workers attempt to cover all hospitals, camp grounds, workplaces and transport systems where people might be found at midnight.

In 2018, the process was different. The majority of households received an access code in the post and were encouraged to complete their census online. If preferred, households could request paper census forms.[3]

The smallest geographic unit used in the census for population data is the mesh block, which there are 53,589 of, with an average of 88 people in each.[4]

The 2018 Census collected data on the following topics:[5]

The first full census in New Zealand was conducted in 1851, and the census was triennial until 1881, at which time it became five-yearly. The 1931 census was cancelled due to the effects of the Great Depression,[6] as was the 1941 census due to World War II.[7] The 1946 census was brought forward to Tuesday 25 September 1945, so that the results could be used for an electoral redistribution (the first for ten years) before the 1946 election.

The 2006 census was held on Tuesday, 7 March. For the first time, respondents had the option of completing their census form via the Internet rather than by a printed form.

The 2011 census was scheduled for Tuesday, 8 March. However, due to the Christchurch earthquake on 22 February 2011, it was cancelled.[9] For the first time ever, all 2011 census forms would have been digitally archived.[10] On 27 May 2011 Statistics New Zealand announced that a census would take place in March 2013.[11] The legislation required to change the census date was introduced to Parliament in August 2011.[12]

Evasion of the census

A few people object to the census and attempt to evade it. The most famous of these is the Wizard of New Zealand, Ian Brackenbury Channell, who has avoided the census on numerous occasions. He spent the night of the 1981 census in a boat beyond New Zealand's 20 km territorial limit in order to avoid enumeration in the country. He has also publicly burnt census forms.[14]

Following the 2006 census, Statistics New Zealand prosecuted 72 people for failing to return their forms, with 41 convictions. After the 2013 census, they wrote to 450 people in July 2013 who had failed to return the forms, of whom 99 were prosecuted, resulting in 46 convictions. Most of those convicted faced two charges and were fined $50 to $500 per charge.[15]