The 2013 census forms were the same as the forms developed for the 2011 census which was cancelled due to the February 2011 major earthquake in Christchurch. There were no new topics or questions. New Zealand's next census was conducted in March 2018.

The results from the post-enumeration survey showed that the 2013 census recorded 97.6 percent of the residents in New Zealand on census night. However, the overall response rate was 92.9 percent, with a non-response rate of 7.1 percent made up of the net undercount and people who were counted in the census but had not received a form.[2]

Population pyramid by age and sex.

Note: All figures are for the census usually resident population count.

The census usually resident population count of 4,242,048 included 230,649 people without an ethnic response and 4,011,399 people who identified with at least one ethnicity.[6] The figures for the total ethnicity of the population.[7] 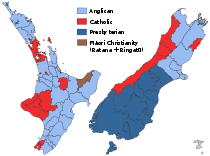 The table below is based on religious affiliation data recorded at the last three censuses for usually resident people. Note that figures and percentages may not add to 100 percent as it is possible for people to state more than one religion.[14]