AVROTROS (Dutch pronunciation: [ˌaːvroːˈtrɔs]) is a Dutch radio and television broadcaster that is part of the Dutch public broadcasting system. It was founded in 2014 as the result of a merger between the Algemene Vereniging Radio Omroep (AVRO) and the Televisie Radio Omroep Stichting (TROS). The name AVROTROS has been used for jointly produced programmes since 1 January 2014. From 7 September 2014 onwards, all existing AVRO and TROS programmes are also broadcast under the name AVROTROS.[1] 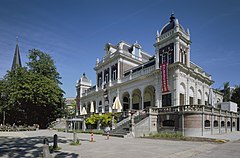 Following the Netherlands' victory at the Eurovision Song Contest 2019 with the song "Arcade" by Duncan Laurence, AVROTROS (together with NPO and NOS) would have been the host broadcaster of the Eurovision Song Contest 2020.[2] However, this edition of the contest was later cancelled due to the COVID-19 pandemic, and as such, the three broadcasters instead hosted and produced the 2021 contest.

Prior to 2014, the AVRO was housed in the AKN [nl] building in Hilversum since 2000, while the TROS operated from the former Christelijk Lyceum, also in Hilversum, since 1970.[3] On 20 June 2012, it was announced that both broadcasters would move into the Wereldomroepgebouw after the merger.[4] The move was completed after a renovation on 1 January 2014.

In 2014, AVROTROS started using the Vondelparkpaviljoen in Amsterdam, which had been renovated and renamed "Vondel CS".[5][6] It was opened to the public on 13 May 2014. The building houses a number of radio and television studios, and offers space for events and activities organised for members.