Alessia Caracciolo (born July 11, 1996), known professionally as Alessia Cara (/əˈlɛsiə ˈkɑːrə/[4]), is a Canadian-Italian[5] singer-songwriter. After uploading acoustic covers of songs such as "Love Yourself" and "Sweater Weather" online, she signed with EP Entertainment and Def Jam Recordings in 2014 and released her debut single the following year. "Here" peaked at number 19 on the Canadian Hot 100 chart and was a sleeper hit in the US, peaking at number 5 on the Billboard Hot 100 chart.[6][7]

Cara's debut studio album, Know-It-All (2015), peaked at number 8 on the Canadian Albums Chart and at number 9 on the Billboard 200. The album's third single, "Scars to Your Beautiful", peaked at number 8 on the Billboard Hot 100 in 2016. In 2017, Cara collaborated with DJ and producer Zedd on the single "Stay", and featured on rapper Logic's song "1-800-273-8255". Cara has received nominations for four Grammy Awards, winning the Best New Artist in 2018.[8] She was nominated for Song of the Year and Record of the Year at the 2019 Latin Grammys for her collaboration with Juanes on "Querer Mejor".[9] Her second studio album, The Pains of Growing (2018), saw the moderate commercial success of the singles "Growing Pains" and "Trust My Lonely".

Alessia Cara was born on July 11, 1996, in Mississauga, Canada,[10] and grew up in Brampton, Canada where she attended Cardinal Ambrozic Catholic Secondary School.[11] Her family is from Calabria, Italy . Her father was born in Canada to Italian parents, and her mother is an Italian immigrant.[12][13] She can speak Italian fluently.[14] As a little girl, she wrote poetry and performed in theatre.[15] She began playing guitar at the age of 10 and taught herself how to play various songs.[15] At the age of 13, she began her own YouTube channel where she posted covers of songs that she performed.[15] She saw Justin Bieber as a career model at the time.[16] 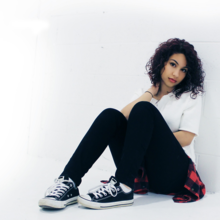 Promotional photograph of Cara from 2015

In 2014, Cara went to the U.S. and signed a management deal with EP Entertainment.[17][18][19] In April 2015, Cara released her official debut single through Def Jam.[20] Titled "Here", it was described by MTV as "a song for everyone who secretly hates parties."[18] Produced by Pop & Oak and Sebastian Kole, the song is about her personal experience with going to a party and being uncomfortable at it.[6] On May 5, 2015, the song was chosen as the "can't-miss" track by Spin,[21] as well as being listed as a "must hear song" by Cosmopolitan.[22] The song was also named one of the best Canadian songs of April by Complex[23] and included on Billboard's "20 Pop Songs You Need For Your Summer Playlist" in June 2015.[24] Rolling Stone later ranked "Here" at number 21 on its year-end list of the 50 best songs of 2015.[25] On July 29, 2015, Cara made her television debut on The Tonight Show Starring Jimmy Fallon.[26] "Here" then received a nomination for "Original Song" at the Streamy Awards.[27] She released the EP Four Pink Walls, containing five songs, including her debut single. Her debut album, Know-It-All, was released on November 13, 2015.[28]

From January to April 2016, Cara embarked on her first headlining tour, the "Know-It-All Tour," performing in various US and Canadian cities.[29] She was short-listed for the BBC Music Sound of... award for 2016 and finished as the runner-up.[30] Cara was awarded as Breakthrough Artist of the Year at the 2016 Juno Awards.[31] On March 7, 2016, Cara released a music video for "Wild Things."[32] In April 2016, Cara was announced to be one of the supporting acts of British alternative rock band Coldplay in the European and North American legs of their A Head Full of Dreams Tour, alongside British singer songwriter and Grammy winner Foxes.[33] On June 23, 2016, Cara was featured in a re-released version of the song "Wild" by Troye Sivan. The music video was released on July 22, 2016.[34] She played Glastonbury Festival on June 24, 2016, in the John Peel tent. The music video for Cara's single "How Far I'll Go", from the Disney film Moana, was released on November 3, 2016, and since then has received over 250 million views on YouTube.[35] The song was written by Lin-Manuel Miranda, produced by Oak Felder, and the video was directed by Aya Tanimura.[36] On December 15, 2016, Cara released a music video for "Seventeen."[37]

Her version of the song "The Other Side" was featured on Part II of the show The Get Down and was a remake of a major song also sung by two of the actresses in the show. 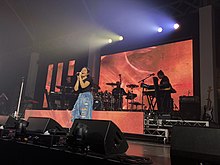 Cara performing in Sydney, Australia in 2018

On January 28, 2018, Cara was named the Best New Artist at the 2018 Grammy Awards, making her the first Canadian artist to win this award.[40] On June 1, 2018, Cara released a teaser video following a week of cryptic Twitter posts.[41] On June 9, she posted lyrics to a new song on her social media accounts for fans to piece together. Once completed, she announced the single's cover and name on June 11.[42] The single, entitled "Growing Pains", was released on June 15, 2018.[43] Its music video was released on June 20, 2018,[44] and was nominated for Best Cinematography at the 2018 MTV VMAS.

In 2018, Cara covered the Elton John song "I Guess That's Why They Call it the Blues" on his tribute album Revamp.

On July 10, 2018, Cara announced that she would be releasing a song she made in her basement, written and produced by her, the next day, as a small gift for her birthday. The single, titled "A Little More", was released on July 11, 2018, with the music video also released the same day.[45][46][47][48] On September 29, 2018, the Canadian Football League announced that Cara would be the halftime performer at the 106th Grey Cup.[49] In October 2018, she collaborated with Italian singer Eros Ramazzotti for the song "Vale per sempre", from the album Vita ce n'è.[50] On October 5, 2018, Cara released another song, entitled "Trust My Lonely". A music video for the song was released the same day.[51][52] On November 8, 2018, a music video for the song "Babies" by Kyle featuring Cara was released.[53] On November 13, 2018, Cara released another song, entitled "Not Today."[54] The release date coincides with the three-year anniversary of the release of her debut album. Cara's second studio album, The Pains of Growing, was released on November 30, 2018.[55] It debuted at number 1 on the US iTunes Pop Charts, in less than two hours after its release. Despite the successful position on iTunes, the album debuted at number 71 on the Billboard 200; 62 positions lower than her debut album in 2015.[56] "Out of Love" was eventually serviced to contemporary hit radio as the album's third single in January 2019.[57] Cara also collaborated with Alec Benjamin on "Let Me Down Slowly", which was released on January 7, 2019. On February 21, Cara announced she would join Shawn Mendes as the opening act on his self-titled world tour for the European, United Kingdom, and United States legs.[58][59] In May, she headlined "The Pains of Growing Tour," visiting Canadian cities in the month of May.[60]

Cara was featured in Bastille's song "Another Place" with a music video released on November 1. The song peaked the number 18 at Billboard Hot Rock Songs.[71]

On November 7, 2019, Cara released her first Christmas song, "Make It To Christmas". The song was Cara's last song of the decade.[citation needed]

On March 6, 2020, Cara collaborated with American singer and songwriter Lauv for the song "Canada" on Lauv's debut album, How I'm Feeling. On April 3, 2020, Cara released "I Choose", her original song for the 2020 Netflix animated movie The Willoughbys, where she made her debut voice-role on a film with the character "Jane Willoughby".[72]

On July 17, 2020, Cara released her first live EP, This Summer: Live Off The Floor, which features live, reimagined performances of the songs off of This Summer, as well as three bonus tracks and an intro that interpolates Summertime by George Gershwin. All of Cara's proceeds from the EP for the next 21 years are going to Save The Children.[73]

Cara was in a relationship with singer Kevin Garrett from 2016 to 2018.

Cara has revealed on separate occasions that she experiences synesthesia,[80][81] and also has keratosis pilaris[82] and alopecia areata.[83][84] She has also been open about her struggles with mental health and insomnia.[85]