Allied Press is an independent New Zealand media and publishing company based in Dunedin. The company's main asset is the Otago Daily Times, New Zealand's oldest daily newspaper. Allied Press has a number of other daily and community newspapers and commercial printing operations throughout the South Island. It also operates Dunedin's regional television station, Channel 39, on Freeview HD. 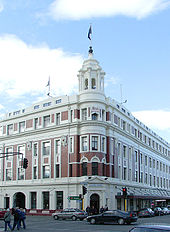 The Allied Press Building in Dunedin

Allied Press was formed through the merger of two Dunedin newspaper companies, the Otago Daily Times (ODT) and the former Evening Star, on 13 May 1975. The merger process was completed during the rest of the year following shareholder approval and other required agreements. ODT staff subsequently shifted into the Evening Star's building. The Evening Star subsequently ceased operations on 3 November 1979 and was replaced by a weekly newspaper called The Star.[1][2] Hal Masters became the company's first chairman while the ODT manager Frank Dickson and Vic Cavanagh served as joint managing directors.[3]

On 12 June 2016, Julian Smith stepped down as managing director of Allied Press. Grant McKenzie, the Dunedin City Council's financial officer and the former director of the University of Otago's financial services, was appointed as the company's chief executive officer. While Smith remains the chairman of the company, McKenzie took over the running of Allied Press.[5]

Besides the Otago Daily Times, Allied Press owns a majority stake in the Greymouth Star. The company also owns a range of community and farming newspapers through the South Island including North Canterbury News, the Ashburton Courier, The Timaru Courier, Oamaru Mail, Lakes District and Central Otago News, Mountain Scene, The Star and The Ensign. In 2018, Allied Press acquired the Clutha Leader from Stuff.[6]

In August 2018, Allied Press acquired the Canterbury media company Star Media, which owned a stable of community newspapers, magazines, and events including the Christchurch–based The Star. Star Media's chairman Nick Smith also served as Allied Press' director and had previously worked for The Star as their advertising cadet. Star Media subsequently became a subsidiary of Allied Press.[7][8]

During the outbreak of the COVID-19 pandemic in New Zealand, Allied Press maintained the print circulation of the Otago Daily Times as well as its websites but suspended the circulation of its community and farming newspapers on 25 March 2020 to comply with lockdown restrictions.[9] In April 2020, Allied Press launched a major project to upgrade its Dunedin printing press.[10] By 14 May 2020, the Government had eased lockdown restrictions, allowing Allied Press' community newspapers and magazines to resume operations.[11]

Allied Press is owned by Sir Julian Smith, who serves as its chairman and managing director, and his family.[6][2] Other key members of the company's leadership team include director and business manager Nick Smith and operations director Ray Clarkson.[2] The company has more than 400 employees.[6]

The building was designed by Edmund Anscombe and built in the late 1920s and is part of a historic precinct that also includes the Dunedin Law Courts and Dunedin Railway Station. It is listed as a Category II Historic Place.[14]