For other cities by the same name, see Anoka (disambiguation).

Anoka (/əˈnoʊkə/ ə-NOH-kə) is a city in and the county seat of Anoka County, Minnesota, United States. Its population was 17,142 at the 2010 census.[8] Anoka is the "Halloween Capital of the World" because it hosted one of the first Halloween parades in 1920.[1] It continues to celebrate the holiday each year with several parades. Anoka is a northern suburb of the Twin Cities. U.S. Highways 10 / 169 and State Highway 47 are three of Anoka's main routes, and it has a station on the Northstar Commuter Rail line to Minneapolis.

Colonizers first settled the site that is now Anoka in 1844. By the mid-1850s Anoka had a school, a store and a flour mill. In 1856, C. C. Andrews called it a "large and handsome village" and noted that pine logs were floated down the Rum River to sawmills there.[9] The city was formally incorporated in 1878. The name Anoka was derived from two Indian words. The native Dakota used A-NO-KA-TAN-HAN, meaning "on both sides", or "from both sides", referring to its location on the banks of the Rum River. The native Ojibwa used ON-O-KAY, meaning "working waters".[citation needed] 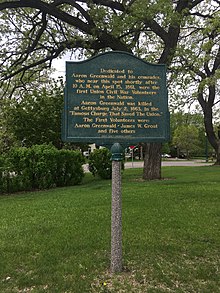 Anoka has a strong claim to having provided the first Union Army volunteers during the Civil War, as noted by a small plaque at the corner of West Main Street and Park Street. Alexander Ramsey, Minnesota's governor in 1861, was in Washington, D.C. when Fort Sumter was fired upon. He immediately offered a regiment to the War Department, and telegraphed former governor Willis Gorman and Lieutenant Governor Ignatius L. Donnelly that morning. Gorman, attending a district court session in Anoka, received the note by messenger from St. Paul and called a court recess, asking for volunteers. Aaron Greenwald, who has an "island" named after him on Lake George, and five others stepped forward; Greenwald was the first to sign. He died on July 5, 1863, after sustaining a mortal wound as a member of the 1st Minnesota Regiment in defense against Pickett's Charge at the Battle of Gettysburg.[citation needed] 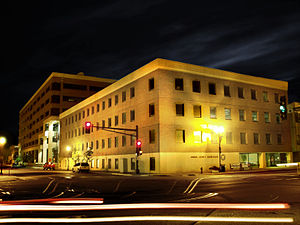 According to Anoka's 2010 Comprehensive Annual Financial Report, its top employers were:

Museums and other points of interest

In 2000, Anoka elected 22-year-old Bjorn Skogquist as mayor. He was reelected in 2002, 2004 and 2006. Skogquist was the second-youngest mayor ever elected in Minnesota (one year older than John Gibeau, who was elected mayor of Ceylon in 1998). He worked for open government, code reform, protection of historic housing and open space and encouraged young people to become involved in civics. In 2010, Anoka elected Phil Rice mayor. Rice was reelected in 2012, 2014, 2016 and 2018.

Higher education institutions in Anoka include Anoka Technical College. One of the two main Anoka-Ramsey Community College campuses is in neighboring Coon Rapids.

Anoka has several private schools for all ages, including St. Stephens Catholic School.[16]