Anoka County (/əˈnoʊkə/ ə-NOH-kə) is the fourth-most-populous county in the U.S. state of Minnesota. As of the 2010 United States census, the population was 330,854.[2] The county seat and namesake of the county is the city of Anoka,[3] which is derived from the Dakota word anokatanhan meaning "on (or from) both sides," referring to its location on the banks of the Rum River.[4] The largest city in the county is the city of Blaine, the thirteenth-largest city in Minnesota and the eighth-largest Twin Cities suburb.

Anoka County comprises the north portion of the Minneapolis-St. Paul-Bloomington, MN-WI Metropolitan Statistical Area, the largest metropolitan area in the state and the sixteenth-largest in the United States with about 3.64 million residents.

The county is bordered by the counties of Isanti on the north, Chisago and Washington on the east, Hennepin and Ramsey on the south, Sherburne on the west, and the Mississippi River on the southwest. The Rum River cuts through the county and was the site of many early European settlements. It was a common route to the Mille Lacs Lake, the spiritual homeland of the Ojibwe people. Father Louis Hennepin traveled the river in his first exploration of the region.[5] The area became a center of fur trade and logging as French and French Canadian communities grew in the cities of Anoka and Centerville.[6] Organized in 1857, the county's southern border eventually met Minneapolis and has become a predominantly suburban area following the construction of Interstate 35W. The county is home to local Twin Cities destinations such as the Heights Theater in Columbia Heights and Northtown Mall and the National Sports Center in Blaine. 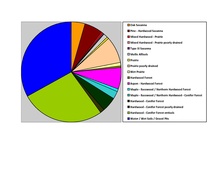 Anoka County was organized by an act of the Minnesota Territorial Legislature on May 23, 1857, the year prior to Minnesota's admission to the Union. It was formed from parts of Ramsey County and Benton County; the Rum River previously divided the line between the two counties. The boundaries were mainly the same as they are now, except for a small part of the southeastern tip along the Mississippi River and at the south, formerly known as Manomin County. It was a small portion that connected to Ramsey and occupied one-third of the congressional township. It was then attached to Anoka County by constitutional amendment November 2, 1869. It became known as Fridley in 1879.

The first European descendants to explore what is now Anoka County were the Franciscan friar Louis Hennepin and his party. Fur traders soon began to settle in the area which is now Ramsey County. They settled on the Rum River and more people were attracted to the area. A community was created which is now called Anoka.

The Mississippi River flows southeasterly along the county's southwestern boundary. The Rum River flows southerly through the western part of the county, discharging into the Mississippi at the county's southwestern boundary. The terrain consists of low rolling wooded hills.[8] The terrain slopes to the south and east; its highest point is a small hillock 1.2 mile (1.9 km) east of the county's northwest corner, at 1,100' (335m) ASL.[9] Otherwise the terrain's highest point is along the western part of the north boundary line, at 1,083' (330m) ASL.[10] The county has a total area of 446 square miles (1,160 km2), of which 423 square miles (1,100 km2) is land and 23 square miles (60 km2) (5.2%) is water.[11] 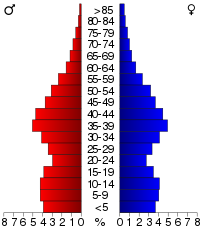 Age pyramid of county residents based on 2000 Census data

On a national level, Anoka County has voted for the Republican presidential candidate from 2000 onward. However, incumbent Democratic-Farmer-Labor Senator Amy Klobuchar defeated Jim Newberger by over 20,000 votes here in the 2018 midterms; Klobuchar also won this county in 2006 and 2012. Despite this, Republican Karin Housley narrowly defeated Democrat Tina Smith in the concurrent Senate special election in 2018, despite Smith winning the overall election by a margin of over 10 points.