An anti-materiel rifle (AMR) is a rifle designed for use against military equipment (materiel), rather than against humans ("anti-personnel"). 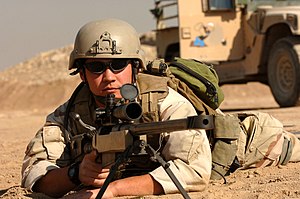 US Navy Explosive Ordnance Disposal technician with a McMillan Tac-50

The origins of the anti-materiel rifle go back to the First World War, during which the first anti-tank rifles appeared. While modern tanks and most other armored vehicles are too well protected to be affected by anti-materiel rifles, the guns are still effective for attacking unarmored or lightly armored vehicles. They can also be used against stationary enemy aircraft, missile launchers, radar equipment, small watercraft, communications equipment, crew served weapons and similar targets. Their value lies in their ability to precisely target and disable enemy assets from long range at relatively low cost.

Despite having been designed to be used against equipment, anti-materiel rifles have also been used for killing soldiers from distances that are beyond the effective range of rifle-caliber cartridges. Anti-materiel rifles can also penetrate most obstacles and building materials, making them viable for dispatching targets behind cover that is usually hard enough to stop rifle-caliber cartridges.

The offensive use of anti-materiel rifles or special application scoped rifles (SASR) is termed hard target interdiction (HTI) by the United States military.[1]

Anti-materiel rifles can also be used in non-offensive roles – for example, for safely destroying unexploded ordnance. 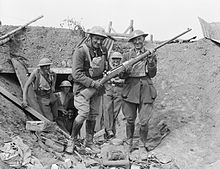 New Zealand Officers of the British Expeditionary Force with a captured German anti-tank gun in Second Battle of Bapaume, France, during World War I. This photograph is evidence of how quickly military technology had to evolve during World War I.

The history of anti-materiel rifles dates back to use during the First World War. The need for Anti-tank rifles was first encountered by the Germans when faced with the British Mark 1 tank. The Mark I could cross ditches up to nine-foot (2.7 m) wide, which made it a major threat to infantry in trench defenses. As a counter, the Germans first used “direct fire mortars” which were mortars aimed at low angles pointing towards enemy tanks. Later, the Germans developed the T-Gewehr anti-tank rifle, which can be credited with being the first anti-materiel rifle. The rifle was designed to penetrate the thick armor of the British tanks. The rifle weighed 41 lb (19 kg) when loaded, fired a 13.2 mm round weighing 55.5 g (1.96 oz), and had an effective range of about 1,600 ft (500 m). This weapon had a two-man crew: one to load and the other to fire the weapon, although they often switched roles. The recoil of this weapon was so high that it was known to break collar bones and dislocate shoulders. The rifle fired a steel core armor-piercing round specifically designed for the purpose of being used with this rifle.

During World War II, anti-materiel guns were widely used. The British Boys .55 calibre anti-tank rifle was a significant advance on the usual .303 calibre ammunition used by its infantry. Another weapon used was the Lahti L-39 rifle, an anti-materiel rifle designed by the Finns. One version was designed to fire a 13.2 mm cartridge and another a 20 mm cartridge. There was debate over which was more effective at piercing armor. Some argued that the smaller cartridge travelled faster and could penetrate deeper into the armor, while some believed that the higher caliber rounds would cause greater damage. The weapon was quite heavy at 109 lb (49 kg) and had an 88-inch (220 cm) barrel, and it carried the nickname "the elephant gun".

The M82 rifle first saw action in the 1990s during Operation Desert Shield and Desert Storm. The US Marine Corps initially purchased around 125 M82 rifles; orders from the Army and Air Force followed. These weapons were used with rounds such as armor piercing incendiary rounds (API) which were effective against such targets as buildings, trucks, and parked aircraft.[3] The purpose of this round was to penetrate non-armored vehicles and burst into flames on impact.

Anti-materiel guns were used during World War I and World War II to penetrate the armor of tanks. In the modern era, the armor of tanks and other vehicles increased, making it difficult for .50 BMG bullets to penetrate. Modern day anti-materiel rifles are used to penetrate light armor vehicles or targets such as concrete barricades and buildings as well as being used to destroy unexploded ordnance. One of the most popular anti-materiel rifles today is the Barrett M107, not only for its military use but also as one of the most popular weapons available to civilians.[4] This is due to the design of the weapon, being built with a suppressor-ready muzzle brake, a thermal cheek pad, and a hand grip mounted on the inside of the rail. This rifle fires a .50 BMG caliber bullet and weighs 28.7 lb (13.0 kg), with a barrel length of 29 in (740 mm).[5] Other popular anti-materiel rifles include the Zastava M93 Black arrow, McMillan Tac-50, Gepard GM6 Lynx, AMSD OM 50 Nemesis, Accuracy International AS50, Mechem NTW-20, Istiglal IST-14.5, WKW Wilk and the CheyTac Intervention M-200.[6][dead link]

Anti-materiel rifles are primarily for use against military equipment rather than personnel. The type and size of ammunition defines a rifle as anti-materiel. When used with conventional ball or target ammunition the rifle does not have any anti-materiel capability above and beyond that of any other high velocity, large calibre rifle. The Saint Petersburg Declaration of 1868 deemed explosive rounds to be inhumane in use against personnel, but they can be employed against materiel. The size of the bullet also plays a factor in the definition. A standard rifle typically fires a 5.56mm or 7.62mm round, while anti-materiel rifles tend to fire a 12.7-mm round with the capacity for greater destruction and penetration.

In general, anti-materiel rifles are chambered for 12.7×99 mm NATO (.50 BMG), 12.7×108 mm Russian, 14.5×114 mm Russian, and 20 mm cartridges. The large cartridges are required to be able to fire projectiles containing usable payloads, such as explosives, armor-piercing cores, incendiaries, or combinations of these, as found in the Raufoss Mk 211 projectile.

Russian heavy semi-automatic sniper rifle chambered for the 12.7×108 mm round.

The recoil produced by the cartridges employed dictates that these rifles are designed to be fired from the prone position. Bipods and monopods and muzzle brakes are used as accessories to employ these rifles as comfortably and accurately as possible. Firing several 12.7×99 mm NATO, 12.7×108 mm Russian, or larger caliber shots from the (unsupported) standing position or in a kneeling position would be very uncomfortable for the operator and can result in them being knocked over or sustaining a shoulder injury.