arXiv (pronounced "archive"—the X represents the Greek letter chi [χ])[1] is an open-access repository of electronic preprints and postprints (known as e-prints) approved for posting after moderation, but not peer review. It consists of scientific papers in the fields of mathematics, physics, astronomy, electrical engineering, computer science, quantitative biology, statistics, mathematical finance and economics, which can be accessed online. In many fields of mathematics and physics, almost all scientific papers are self-archived on the arXiv repository before publication in a peer-reviewed journal. Some publishers also grant permission for authors to archive the peer-reviewed postprint. Begun on August 14, 1991, arXiv.org passed the half-million-article milestone on October 3, 2008,[2][3] and had hit a million by the end of 2014.[4][5] As of April 2021, the submission rate is about 16,000 articles per month.[6] 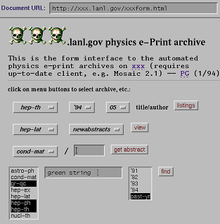 A screenshot of the arXiv taken in 1994,[7] using the browser NCSA Mosaic. At the time, HTML forms were a new technology.

ArXiv's daily submission rate growth over 30 years since its beginning with topics labelled by the standard abbreviations used on arxiv.org[8]

arXiv was made possible by the compact TeX file format, which allowed scientific papers to be easily transmitted over the Internet and rendered client-side.[9] Around 1990, Joanne Cohn began emailing physics preprints to colleagues as TeX files, but the number of papers being sent soon filled mailboxes to capacity. Paul Ginsparg recognized the need for central storage, and in August 1991 he created a central repository mailbox stored at the Los Alamos National Laboratory (LANL) which could be accessed from any computer. Additional modes of access were soon added: FTP in 1991, Gopher in 1992, and the World Wide Web in 1993.[5][10] The term e-print was quickly adopted to describe the articles.

It began as a physics archive, called the LANL preprint archive, but soon expanded to include astronomy, mathematics, computer science, quantitative biology and, most recently, statistics. Its original domain name was xxx.lanl.gov. Due to LANL's lack of interest in the rapidly expanding technology, in 2001 Ginsparg changed institutions to Cornell University and changed the name of the repository to arXiv.org.[11] It is now hosted principally by Cornell, with five mirrors around the world.[12]

Its existence was one of the precipitating factors that led to the current movement in scientific publishing known as open access. Mathematicians and scientists regularly upload their papers to arXiv.org for worldwide access[13] and sometimes for reviews before they are published in peer-reviewed journals. Ginsparg was awarded a MacArthur Fellowship in 2002 for his establishment of arXiv.[14]

The annual budget for arXiv was approximately $826,000 for 2013 to 2017, funded jointly by Cornell University Library, the Simons Foundation (in both gift and challenge grant forms) and annual fee income from member institutions.[15] This model arose in 2010, when Cornell sought to broaden the financial funding of the project by asking institutions to make annual voluntary contributions based on the amount of download usage by each institution. Each member institution pledges a five-year funding commitment to support arXiv. Based on institutional usage ranking, the annual fees are set in four tiers from $1,000 to $4,400. Cornell's goal is to raise at least $504,000 per year through membership fees generated by approximately 220 institutions.[16]

In September 2011, Cornell University Library took overall administrative and financial responsibility for arXiv's operation and development. Ginsparg was quoted in the Chronicle of Higher Education as saying it "was supposed to be a three-hour tour, not a life sentence".[17] However, Ginsparg remains on the arXiv's Scientific Advisory Board and its Physics Advisory Committee.[18][19]

Additionally, an "endorsement" system was introduced in 2004 as part of an effort to ensure content is relevant and of interest to current research in the specified disciplines.[23] Under the system, for categories that use it, an author must be endorsed by an established arXiv author before being allowed to submit papers to those categories. Endorsers are not asked to review the paper for errors, but to check whether the paper is appropriate for the intended subject area.[20] New authors from recognized academic institutions generally receive automatic endorsement, which in practice means that they do not need to deal with the endorsement system at all. However, the endorsement system has attracted criticism for allegedly restricting scientific inquiry.[24][25]

A majority of the e-prints are also submitted to journals for publication, but some work, including some very influential papers, remain purely as e-prints and are never published in a peer-reviewed journal. A well-known example of the latter is an outline of a proof of Thurston's geometrization conjecture, including the Poincaré conjecture as a particular case, uploaded by Grigori Perelman in November 2002.[26] Perelman appears content to forgo the traditional peer-reviewed journal process, stating: "If anybody is interested in my way of solving the problem, it's all there [on the arXiv] – let them go and read about it".[27] Despite this non-traditional method of publication, other mathematicians recognized this work by offering the Fields Medal and Clay Mathematics Millennium Prizes to Perelman, both of which he refused.[28]

Papers can be submitted in any of several formats, including LaTeX, and PDF printed from a word processor other than TeX or LaTeX. The submission is rejected by the arXiv software if generating the final PDF file fails, if any image file is too large, or if the total size of the submission is too large. arXiv now allows one to store and modify an incomplete submission, and only finalize the submission when ready. The time stamp on the article is set when the submission is finalized.

The standard access route is through the arXiv.org website or one of several mirrors. Several other interfaces and access routes have also been created by other un-associated organisations.

These include the University of California, Davis's front, a web portal that offers additional search functions and a more self-explanatory interface for arXiv.org, and is referred to by some mathematicians as (the) Front.[29] A similar function used to be offered by eprintweb.org, launched in September 2006 by the Institute of Physics, and was switched off on June 30, 2014. Carnegie Mellon provides TablearXiv,[30] a search engine for tables extracted from arXiv publications. Google Scholar and Microsoft Academic can also be used to search for items in arXiv.[31]

Metadata for arXiv is made available through OAI-PMH, the standard for open access repositories.[32] Content is therefore indexed in all major consumers of such data, such as BASE, CORE and Unpaywall. As of 2020, the Unpaywall dump links over 500,000 arxiv URLs as the open access version of a work found in CrossRef data from the publishers, making arXiv a top 10 global host of green open access.

Finally, researchers can select sub-fields and receive daily e-mailings or RSS feeds of all submissions in them.

Files on arXiv can have a number of different copyright statuses:[33]

While arXiv does contain some dubious e-prints, such as those claiming to refute famous theorems or proving famous conjectures such as Fermat's Last Theorem using only high-school mathematics, a 2002 article which appeared in Notices of the American Mathematical Society described those as "surprisingly rare".[34] arXiv generally re-classifies these works, e.g. in "General mathematics", rather than deleting them;[35] however, some authors have voiced concern over the lack of transparency in the arXiv screening process.[21]