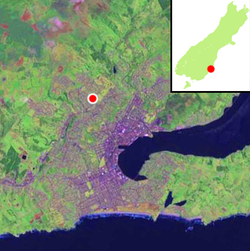 Wakari is an anglicisation of the Māori Whakaari, "exposed to view". This is the Māori name for the hill, Flagstaff, which lies 2.5 kilometres (1.6 mi) to the northwest. A shibboleth is that many (though not all) local residents pronounce the name as "wy-kar-ree" (/waɪˌkæriː/).

The suburb is bounded in the south by Taieri Road, a main suburban arterial route which links central Dunedin with the Taieri Plains. West of Halfway Bush, the road becomes Three Mile Hill Road, crossing the eponymous hill to reach the Taieri Plain northeast of Mosgiel. To the southeast of Wakari, Taieri Road runs under the Roslyn Overbridge and becomes Stuart Street, one of central Dunedin's main streets. Other main roads in and around Wakari include Balmacewen Road in the northern part of the suburb, Helensburgh Road in the northeast, Nairn Street, and Shetland Street.

Wakari's most prominent structure is the Wakari Hospital, one of Dunedin's main health care centres, which specialises in psychiatric services. This hospital is located in the west of the suburb, close to its boundary with Halfway Bush.

Arai te Uru Marae is also located in Wakari. It is a marae (meeting ground) of Ngāi Tahu and includes Arai te Uru wharenui (meeting house).[2] It is next to Balmacewen Intermediate School.