For the founder of the former chain, see Arthur Barnett.

Arthur Barnett opened his first drapery store in 1903, placing his first newspaper advertisement on 6 March of that year, and opening the next day.[3] During this time his store became famous for its advertisements which were colourful and often relied heavily on gimmicks, such as naming a hat the 'King Dick' after the Prime Minister at the time Richard Seddon. Jim Sullivan argues that "Arthur Barnett's reputation for innovation in retail was becoming well-established - he had a flair and brought colour and a touch of the side show to what was a staid occupation."[3]

New buildings followed in 1909 and 1924. The 1924 Arthur Barnett building designed by Edmund Anscombe was a landmark on the northern part of George Street, Dunedin. It was devastated by fire in 1959, with only the building shell and one major stained glass window surviving. It was rebuilt in 1960s modernist style behind the existing facades, the main retail floor being a soaring glass-roofed structure, inspiring the store's slogan of that era: "the Daylight Store." This was demolished progressively in 1995-7 and replaced by the Meridian Mall incorporating a reduced-size Arthur Barnett store across two levels.

Arthur Barnett took over the ailing DIC department store company in the 1980s. The D.I.C. had stores throughout New Zealand and should have proven a good geographical match for Arthur Barnett. In particular, the D.I.C. had 4 stores in the Auckland market, New Zealand's biggest. In December 1987, Arthur Barnett bought the trading assets of the three South Island stores and 50% of the 13 North Island stores which were run as a joint venture with Brierley Investments Ltd. Arthur Barnett Ltd bought the 16 D.I.C. stores oufloat_right in July 1988. The D.I.C. Stores were in Invercargill, Dunedin, Christchurch, Lower Hutt, Palmerston North, Wanganui, Hastings, Napier, Gisborne, Rotorua, Hamilton, Pakuranga, Henderson, Karangahape Road (Auckland), Takapuna, and Whangarei.

At its peak Arthur Barnett Ltd had over 1200 staff and 19 stores (the 16 former D.I.C. stores, along with its own branches in Alexandra, Balclutha, and Dunedin). However, the merger did not work well and all D.I.C. stores with the exception of Christchurch were closed within 2 years. By 1992 the majority of The D.I.C. assets were disposed of and the company was able to concentrate on its stores in Dunedin, Alexandra, Balclutha and Christchurch. In 1987 the Christchurch store in the Beaths Department Store Building was re-branded as Arthur Barnett[4] and refurbished within the High Street Mall development in the city's centre. The Alexandra and Balclutha stores were closed in 1995 and 2001 respectively. The Balclutha store was taken over by rival Invercargill-based department store chain H & J Smith. The D.I.C. debacle cost Arthur Barnett around $NZ 20 million and as a result the company had to borrow heavily to help finance the Meridian Mall project in 1995.

Arthur Barnett is located at 285 George Street, The Meridian Mall

Meridian Mall and a single store

The Meridian Mall opened on 5 September 1997 with the final development costs close to $NZ 50 million. As the primary anchor tenant, Arthur Barnett had the greatest floor space, spread across two levels, although this being only about half that of the old store.[5] The main and lower floors are linked by escalators, with a more upmarket appearance than previous Arthur Barnett stores.

The Meridian building was sold in 2003, with the proceeds used to retire debt. Finally in February 2006, the Christchurch store was closed. Many of the staff were able to be relocated to other retailers including Farmers and Ballantynes.[citation needed] From then on, the company only operated a single store, which acted as Otago's luxury department store, specialising in cosmetics, fashion, homeware and school uniforms.

Also in 2011, Arthur Barnett opened the 'Arthur Barnett Gift Shop' at the front of the Meridian, in the former Kimberleys store. The 'Gift Shop' was later changed to a 'Clearance Shop', and was closed by 2012.[8][9] Mid November 2012 saw the opening of a temporary cosmetics clearance shop in the upper level of the Meridian.

During OUSA Orientation Week ('O Week') in March, the company operated a branded marquee at the University of Otago. The kiosk, staffed by two Clinique beauty consultants, promoted the store and Beauty department to new students. The marquee did not appear after 2012.

The logo may be obtained from Arthur Barnett Ltd.

The company followed up their Peta Mathias-hosted event in October with 'Fashion in the Chapel' hosted by model Rachel Hunter at the John McGlashan College chapel. The event launched the store's spring and summer fashion collections.[14]

The well-established Beauty department was the largest and most comprehensive south of Christchurch. Makeup and skincare are available at serviced cosmetics counters for M·A·C, Yves Saint Laurent, and most recently, Jurlique (exclusive in the South Island), all exclusive to Arthur Barnett in Otago and Southland. The Fine Fragrance counter is the largest in Dunedin. Arthur Barnett formerly housed Dunedin's only Smashbox counter. In early-mid-2009, Smashbox was relocated to new rival Life Pharmacy, in the new Wall Street Mall nearby. Other former beauty counters include Christian Dior, and, until the brand's withdrawal from the New Zealand market in mid-2009, Origins.[21][22]

Former departments include Electronics and Large Appliances/Whiteware featuring Fisher & Paykel. From 2007, these departments were branded as the 'store-within-a-store', '100% Arthur Barnett' under the New Zealand 100% Electrical franchise.[23] 100% and its product areas were removed in mid-2010, with only Small Appliances retained as an independent department. Also in 2007,[21] space was made within the Casual Living department for the nest [sic] homeware concept store[24] as a separate 'store-within-a-store'.[25] The entire nest [sic] franchise collapsed into receivership in October 2010.[26] In mid-2010, the lower level of the Meridian Mall was reconfigured, considerably decreasing the store's floor space in what was originally its own mall.[27] 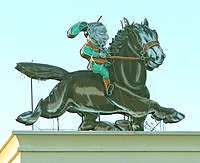 The advertising sign for Arthur Barnett is a prominent feature on the Dunedin skyline. Named Can't Stop, this neon sign features a small man (representing the firm's founder) trying to control a large horse, possibly a Clydesdale.

The sign was designed by the New Zealand artist Heber Thompson for the 1924 Arthur Barnett building (designed by Edmund Anscombe) which until 1995 stood on the site now occupied by the Meridian Mall. The sign still remains despite the change in ownership of the Meridian.

Arthur Barnett was listed on the New Zealand stock exchange until a NZ$9.5 million internal takeover by company directors Julian Smith and Trevor Scott took the company private in 2002 through their company Belwash Holdings Ltd.[28][29]