This article is about the street in Dunedin, New Zealand. For Baldwin Street in Toronto, see Baldwin Village.

Baldwin Street, in Dunedin, New Zealand is located in the residential suburb of North East Valley, 3.5 kilometres (2.2 mi) northeast of Dunedin's central business district. It is recognised by Guinness World Records as the steepest street in the world.[1] 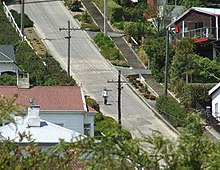 A woman descends the street.
The location of Baldwin Street within Dunedin's urban area

A short straight street a little under 350 metres (1,150 ft) long, Baldwin Street runs east from the valley of the Lindsay Creek up the side of Signal Hill towards Opoho, rising from 30 m (98 ft) above sea level at its junction with North Road to 100 m (330 ft) above sea level at the top,[2] an average slope of slightly more than 1:5. Its lower reaches are only moderately steep, and the surface is asphalt, but the upper reaches of this cul-de-sac are far steeper and surfaced in concrete (200 m or 660 ft long) for ease of maintenance (bitumen—in either chip seal or asphalt—would flow down the slope on a warm day) and for safety in Dunedin's frosty winters. 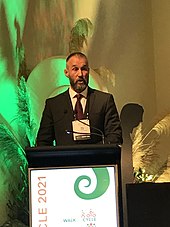 The street's steepness was unintentional. As with many other parts of early Dunedin, and indeed New Zealand, streets were laid out in a grid pattern with no consideration for the terrain, usually by planners in London. In the case of Baldwin Street (and much of the Dunedin street plan), the layout was surveyed by Charles Kettle in the mid-19th century. The street is named after William Baldwin, an Otago Provincial Councillor and newspaper founder, who subdivided the area.

For cars it is a dead-end street, but Baldwin Street is linked across the top by Buchanan Street, a footpath following an otherwise unformed (i.e. unpaved) road linking it with Calder Avenue and Arnold Street, which are unformed in their upper reaches where Baldwin is steepest. The streets running parallel to Baldwin are all quite steep: Arnold Street (1:3.6), Dalmeny Street (1:3.7), and Calder Avenue (1:5.4).

On 16 July 2019, Baldwin Street lost its title of World's Steepest Street to Ffordd Pen Llech, with Baldwin Street being at a gradient of 35%, and Ffordd Pen Llech being at a gradient of 37.45%. Otago Chamber of Commerce chief executive Dougal McGowan remarked that it could lead to a drop in visitor numbers to Baldwin Street but added that it could be a "blessing in disguise for some residents fed up with crowds of visitors, trampled gardens and bad driving decisions on the street." Mayor of Dunedin Dave Cull said that the Dunedin City Council could consider altering the signage wording from the world's steepest street to the southern hemisphere's steepest street.[5][4][6]

The unicyclist has to lean forward to keep his centre of gravity centred over his unicycle's contact with Baldwin Street, on the steeper cement covered portion of the street.

The street is the venue for an annual event in Dunedin, the Baldwin Street Gutbuster. Every summer since 1988[2][9] this exercise in fitness and balance involves athletes running from the base of the street to the top and back down again. The event attracts several hundred competitors annually and the race record is 1:56.[10]

In March 2001, a 19-year-old University of Otago student was killed when she and another student attempted to travel down the street inside a wheelie bin. The bin collided with a parked trailer, killing her instantly, and causing serious head injuries for the other student.[11][12] 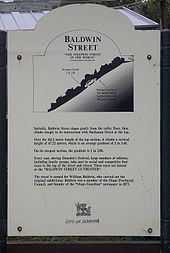 Information sign at the bottom of the street which reports a gradient of 1 in 2.86 at the steepest point

Since 2002, a further charity event has been held annually in July, which involves the rolling of over 30,000 Jaffas (spherical confectionery-coated chocolate confectionery). Each Jaffa is sponsored by one person, with prizes to the winner and funds raised going to charity. This event follows a tradition started in 1998, when 2,000 tennis balls were released in a sponsored event raising money for Habitat for Humanity.[2]

On 2 January 2010, Cardrona stuntman Ian Soanes rode down Baldwin Street on a motorcycle on one wheel.[13]

On 26 January 2018, 11-year-old Harry Willis raised over $11,000 NZD for the Ronald McDonald House in Christchurch by ascending the street on a pogo stick. The climb took around ten minutes. Willis's effort has since been commemorated with a plaque at the top of the street.[14]

On 10 January 2019, a man rode a Lime scooter down Baldwin St,[15] the same day that the scooters had been introduced to Dunedin and a week after Dunedin's mayor, Dave Cull, had said he was relying "on people's common sense" not to take the scooters down the world's steepest street.[16]

Other steep streets include:

Many streets in the west of England and in Wales have reported slopes of 33% and higher. Vale Street in Bristol is often also reported as the steepest street in Britain (21.81°/40.02%[25]) and hence may have a slope even steeper than 36.6%. However, these roads are mostly shorter roads than those listed above, with far more frequent turns as opposed to the straight path of Baldwin.