Ballantine Books is a major book publisher located in the United States, founded in 1952 by Ian Ballantine with his wife, Betty Ballantine.[1] It was acquired by Random House in 1973, which in turn was acquired by Bertelsmann in 1998 and remains part of that company today. Ballantine's logo is a pair of mirrored letter Bs back to back.[2] The firm's early editors were Stanley Kauffmann and Bernard Shir-Cliff.[3]

When the first Ballantine Book, Cameron Hawley's Executive Suite was published in 1952, the publishing industry saw that the simultaneous hardcover and paperback editions were obvious successes.[4] Houghton Mifflin published the $3.00 hardcover at the same time Ballantine distributed its 35¢ paperback. By February 1953, Ballantine had sold 375,000 copies and was preparing to print 100,000 more. Houghton Mifflin sold 22,000 hardback copies in its first printing. Ballantine's sales soon totaled 470,000 copies. Instead of hurting hardback sales as some predicted, the paperback edition instead gave the book more publicity. After the film rights were sold to MGM, Robert Wise directed the 1954 film, nominated for four Academy Awards.[5]

On the heels of that kind of sales and publicity, other Ballantine titles were seen in spinner racks across the country. Executive Suite was followed by Hal Ellson's The Golden Spike (#2), Stanley Baron's All My Enemies (#3), Luke Short's Saddle by Starlight (#4, also with Houghton Mifflin), Ruth Park's The Witch's Thorn (#5, also with Houghton Mifflin), Emile Danoen's Tides of Tide (#6), Frank Bonham's Blood on the Land (#7), Al Capp's The World of Li'l Abner (#8, with Farrar, Straus & Young) and LaSelle Gilman's The Red Gate (#9).

During the early 1950s, Ballantine attracted attention as one of the leading publishers of paperback science fiction and fantasy, beginning with The Space Merchants (#21). The Frederik Pohl and C. M. Kornbluth novel had first appeared in Galaxy Science Fiction under the title Gravy Planet. Kauffman scored when he acquired and edited Ray Bradbury's Fahrenheit 451 (originally in Galaxy as a shorter version, "The Firemen").[3]

In the early 1960s, the company engaged in a well-known rivalry with Ace Books for the rights to reprint the works of J. R. R. Tolkien and Edgar Rice Burroughs in paperback form. Ballantine prevailed in the struggle for the Tolkien work, with their editions of Tolkien's The Lord of the Rings including a message on the back cover from Tolkien himself urging consumers to buy Ballantine's version and boycott "unauthorized editions" (i.e. the version from Ace Books). A separate Canadian edition of the books was published with different front cover art work. Tolkien asked for (and received) permission to add the back cover message. Betty Ballantine recalled: "And we did put a little statement on the back covers saying that Ace was not paying royalties to Professor Tolkien, and everybody who admired Lord of the Rings should only buy our paperback edition. Well, everybody got behind us. There was literally no publication that did not carry some kind of outraged article. And of course, the whole science fiction fraternity got behind the book; this was their meat and drink."[3]

In 1969, Lin Carter edited the Ballantine Adult Fantasy series, which brought a number of rare titles back into print, as well as launching Katherine Kurtz's Deryni series. During the mid-1970s, Ballantine published the Star Trek Logs, a ten-volume series of Alan Dean Foster adaptations of the animated Star Trek. In 1968, Ballantine published a non-fiction book related to Star Trek, The Making of Star Trek by Stephen E. Whitfield and Gene Roddenberry.

In 1976, Ballantine published the novelization of a forthcoming science fiction film, Star Wars: From the Adventures of Luke Skywalker by George Lucas (ghostwritten by Alan Dean Foster). The book, like the film Star Wars released the following year, was an enormous success and sold out its initial print run. In the first three months, Ballantine sold 3.5 million copies.[6][7] 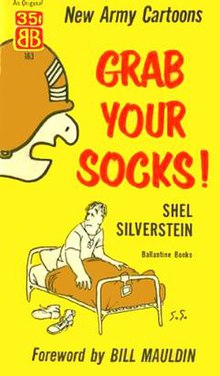 After publishing The World of Li'l Abner, Ballantine introduced Shel Silverstein in 1956 with his Grab Your Socks! collection of cartoons from Pacific Stars and Stripes.

As an editor at Ballantine during the 1950s and 1960s, Bernard Shir-Cliff handled the Zacherley anthologies, the paperback of Hunter Thompson's Hell's Angels, Harvey Kurtzman's The Mad Reader and other early Mad paperbacks. He made four contributions to Mad and other magazines edited by Kurtzman. In 1956, Shir-Cliff edited a humor anthology, The Wild Reader, for Ballantine, including essays, poems and satirical pieces by Robert Benchley, Art Buchwald, Tom Lehrer, John Lardner, Shepherd Mead, Ogden Nash, S. J. Perelman, Frank Sullivan, James Thurber and others. The 154-page paperback was illustrated with cartoons by Kelly Freas who also did the front cover.[citation needed]

Another contributor to both Ballantine and the Kurtzman magazines was the cartoonist-author Roger Price. He did two humor books for Ballantine. I'm for Me First (1954) details Herman Clabbercutt's plan to launch a revolutionary political party known as the "I'm for Me First" Party. In One Head and Out the Other (1954) popularized the catchphrase "I had one grunch, but the eggplant over there." The nonsense non sequitur was immediately adopted by science fiction fandom, appearing occasionally in fanzines, as noted in Fancyclopedia II (1959).[8]

Ballantine has also been the publisher of books featuring Jim Davis' comic strip Garfield since 1980.