The Belgian Federal Parliament is the bicameral parliament of Belgium. It consists of the Chamber of Representatives (Dutch:

Senaat (help·info), French: Sénat, German: Senat). It sits in the Palace of the Nation (French: Palais de la Nation, Dutch: Paleis der Natie, German: Palast der Nation). The Chamber of Representatives is the primary legislative body; the Senate functions only as a meeting place of the federal communities and regions.

The Constitution does not mention the Federal Parliament as such; it stipulates that the federal legislative power is exercised by the King and the Chamber of Representatives (and exceptionally the Senate), and defines when the United Chambers convene.

The Chamber of Representatives holds its plenary meetings in the Palace of the Nation, Brussels. Eligibility requirements for the Chamber are a minimum age of 21, citizenship, and residency in Belgium.

The number of seats in the Chamber is constitutionally set at 150 elected from 11 electoral districts. The districts are divided along linguistic lines: 5 Flemish (79 seats), 5 Walloon (49 seats), and the bilingual district of Brussels-Halle-Vilvoorde (22 seats). The districts are the provinces, except for the districts of Leuven (part of Flemish Brabant) and Brussels-Halle-Vilvoorde. Each district is given a number of seats proportional to its population (not the number of voters) ranging from 4 for Luxembourg to 24 for Antwerp.

All districts have an electoral threshold of 5%, except for Brussels-Halle-Vilvoorde and Leuven; all districts are monolingual, except for Brussels-Halle-Vilvoorde which encompasses both the 19 bilingual municipalities from the Brussels-Capital region and some 35 Dutch-speaking municipalities in Flemish Brabant, incl. 7 with language facilities for French-speakers.

The current composition was elected at the federal elections of 2019.

Since 2014, the Senate consists of 60 members. There are two categories of senators: co-opted senators and senators of community and regional parliaments.

The 10 other senators are co-opted: elected by the 50 other senators. Eligibility requirements for the Senate are identical to those for the Chamber.

The President of the Senate since 2014 has been Christine Defraigne (MR). The Senate holds its plenary meetings in the Palace of the Nation, Brussels.

In certain matters, both Chambers have equal power. These include constitutional revisions, laws requiring a qualified majority, laws on the basic structure of the Belgian State, laws approving agreements of cooperation between the Federal State, the Communities and the Regions, laws on the approval of international treaties, and laws on the organization of the judiciary, the Council of State, and the Constitutional Court. In this case, the mandatory bicameral procedure applies, which means that both Chambers must pass exactly the same version of the bill.

For most other legislation, the Chamber of Representatives takes precedence over the Senate and the optional bicameral procedure applies. This means that the Senate may still intervene as a chamber of consideration and reflection. It has the opportunity to, within specific time limits, examine the bills adopted by the Chamber of Representatives and, if there is a reason to do so, make amendments. The Chamber may subsequently adopt or reject the amendments proposed by the Senate or make new proposals. The Senate can also submit a bill it has adopted to the Chamber, which can approve, reject or amend it. Whatever the case, the Chamber has the final word.

The one-chamber procedure applies in cases where the Chamber of Representatives has the sole power to legislate. It means that the Senate cannot intervene and that the Senate's approval is not required for the bill to pass. The matters for which the Chamber of Representatives is exclusively responsible include naturalizations, ministerial liability, State budget, and accounts and military quotas.

Palace of the Nation 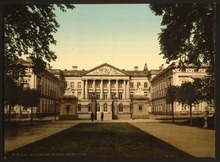 A view of the Palace of the Nation in the 1890s

The Palace of the Nation (French: Palais de la Nation; Dutch: Paleis der Natie) was built to a Neoclassical design by French architect Gilles-Barnabé Guimard from 1779 to 1783 and includes sculptures by Gilles-Lambert Godecharle. Under Austrian rule it housed the Sovereign Council of Brabant before being used as a courthouse during the French period. During the Dutch period it was one of two homes of the Parliament of the United Kingdom of the Netherlands, the other being in the Hague. The provisional Government of Belgium and the Belgian National Congress moved into the building in 1830 and the first session of the House of Representatives and Senate was held there a year later.

It stands near the site of the former palace of the Dukes of Brabant, which was destroyed by fire in 1731, and has itself been badly damaged by fire, in 1820 and 1883.[2]