The Volunteer Corps for Korea (French: Corps de Volontaires pour la Corée), later known as Belgian United Nations Command (BUNC), was a Belgian–Luxembourg military force sent to assist South Korea during the Korean War. A battalion-sized unit, it arrived in Korea in 1951 and remained after the cease-fire until 1955. Over the course of its existence, 3,171 Belgians and 78 Luxembourgers served in the unit.[8]

Belgium, a country in northern Europe, became a signatory member of the United Nations (UN) in 1945 in the aftermath of World War II but had few pre-existing ties with East Asia. The Belgian Army operated a system of national service and already had sizeable commitments as part of the army of occupation in West Germany.

At the time the Korean War broke out in June 1950 the country was in the midst of a political crisis known as the Royal Question. This related to whether King Leopold III should be able to return to the throne after his actions in German-occupied Belgium in World War II but created a wider confrontation between left-leaning communist, socialist and trade-union circles which opposed the King's return and conservatives who supported it. The crisis brought the centre-right Christian Social Party to power although a compromise solution was found in August 1950 under which the King abdicated in favour of his son.

Prime Minister Joseph Pholien was opposed to the rise of communism abroad and wished to gain support from the United States. Both Belgian and Luxembourg governments decided to raise a volunteer-only formation to serve under UN command in the defence of South Korea.

Over 2,000 Belgians volunteered for service in B.U.N.C. Of these, initially only 700 were selected for training at Leopoldsburg. After training, volunteers received their characteristic brown berets. Soldiers from Luxembourg who were trained alongside the Belgians were organised into 1st Platoon, A Company of B.U.N.C.[9]

The Belgian-Luxembourg Corps sailed from Antwerp to Pusan and arrived on 31 January 1951.[10] On arrival in Korea, some South Korean troops were made part of the Belgian contingent in order to bring the regiment up to correct battalion strength along the lines of the US "KATUSA" or Commonwealth "KATCOM" programme.

In April 1951, the Belgians fought in one of the key battles of the Korean War – the Battle of the Imjin River. The First Battalion was relieved by a new battalion fresh from Belgium in August 1951[11] which stayed until 1955.

At the Battle of the Imjin River in 1951, the Belgian battalion held a key pass alongside the British Gloucestershire Regiment. For actions at the Imjin, the Belgians received a US Presidential Citation. During the battle, Albert Crahay, commander of the unit, was wounded by a Chinese phosphorus shell and was evacuated to a hospital in Japan.

B.U.N.C. continued to see action and went on to earn further battle honours at Haktang-Ni – one of the series of battles at Broken Arrow – in October 1951 when the Belgians took up position on an isolated hillside and suffered relentless Chinese attacks which they successfully repelled, killing over a hundred Chinese and losing only a handful of men themselves.

The last main action fought by the Belgian contingent was at the Battle of Chatkol in April 1953. Belgian forces held a defensive arc position in the Iron Triangle for over 55 nights of Chinese assaults.

After the cease-fire, it was seen as unnecessary to keep BUNC up to the strength it had during the war and it was reduced to some 200 men on 30 December 1954, but, like other UN contingents, it was viewed as necessary to maintain a presence in Korea during the uncertain peace following the negotiations at Panmunjom and the last members of the unit finally left Korea on 15 June 1955.

"Belgians Can Do Too!"

BELGIANS CAN DO TOO! was a slogan written across the windshield of Padre of the Unit's (Padre Vander Goten) Jeep during the battles around the "Iron Triangle." Seeing the exhaustion of the troops, the Padre copied the motto of the US 15th Infantry Regiment ("Can Do") alongside whom the Belgians were serving at the time to try to raise morale. The phrase was made famous in Belgium and is thought to summarise the spirit and courage of the Belgian contingent.[14][15]

101 Belgian soldiers, 2 Luxembourgish soldiers and 9 South Korean soldiers attached to the Belgian contingent were killed during the war. 478 Belgians and 17 Luxembourgers were wounded in action and 5 Belgians are still posted as missing. 2 died in North Korean POW Camps.[16] 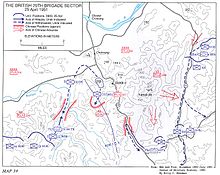 The British 29th Brigade Sector during the Battle of the Imjin River, 25 April 1951. The positions of the Belgian battalion are also marked at the bottom.

The text of the US Presidential Unit Citation for actions at the Imjin River:

The Belgian battalion with the Luxembourg detachment of the UN Forces in Korea is mentioned for exceptional execution of its missions and for its remarkable heroism in its actions against the enemy on the Imjin, near Hantangang, Korea during the period from 20 till 26 April 1951. The Belgian battalion with the Luxembourg detachment, one of the smallest units of the UNO in Korea, has inflicted thirty-fold losses on the enemy compared to its own, due to its aggressive and courageous actions against the Communist Chinese. During this period considerable enemy forces, supported by fire by machine guns, mortars and artillery, repeatedly and heavily attacked the positions held by the battalion but, Belgians and Luxembourgers have continuously and bravely repulsed these fanatic attacks by inflicting heavy losses to the enemy forces...The extraordinary courage shown by the members of this units during this period has bestowed extraordinary honor on their country and on themselves

The Belgian-Luxembourg Corps served at three key battles of the Korean War – the Battle of the Imjin River and Battle of Haktang-ni 1951, and the Battle of Chatkol 1953. 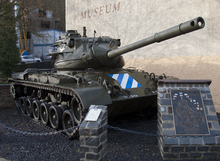 Memorial to the Luxembourgish participation with a Patton tank at the National Museum of Military History, Diekirch.

The 3rd Parachute Battalion maintains the traditions (including the flag and badge) of BUNC and is based in Tielen.