"Belgian" redirects here. For other uses, see Belgian (disambiguation).
Not to be confused with Belgae, a group of tribes living in the northernmost part of Gaul around 100 BC..

Belgians (Dutch: Belgen, French: Belges, German: Belgier) are people identified with the Kingdom of Belgium, a federal state in Western Europe. As Belgium is a multinational state, this connection may be residential, legal, historical, or cultural rather than ethnic. The majority of Belgians, however, belong to two distinct ethnic groups or communities (Dutch: gemeenschap or French: communauté) native to the country, i.e. its historical regions: Flemings in Flanders, who speak Dutch, and Walloons in Wallonia, who speak French or Walloon. There is also a substantial Belgian diaspora, which has settled primarily in the United States, Canada, France, and the Netherlands.

The 1830 revolution led to the establishment of an independent country under a provisional government and a national congress.[10][11] The name "Belgium" was adopted for the country, the word being derived from Gallia Belgica, a Roman province in the northernmost part of Gaul that, before Roman invasion in 100 BC, was inhabited by the Belgae, a mix of Celtic and Germanic peoples.[12][13]

The Latin name was revived in 1790 by the short-lived United Belgian States which was created after a revolution against Austrian rule took place in 1789. Since no adjective equivalent to "Belgian" existed at the time, the French noun "Belgique" (or "Belgium") was adopted as both noun and adjective; a phenomenon borrowed from Latin which was still commonly used during the period.[14] From the sixteenth century, the Low Countries" or "Netherlands", were referred to as 'Belgica' in Latin, as was the Dutch Republic.

Belgians are primarily a nationality or citizen group, by jus soli (Latin: right of the soil),[15] also known as birthright citizenship, and are not a homogeneous ethnic group.[16][17][18] Belgians are made up of two main linguistic and ethnic groups; the Dutch-speakers (called the Flemish) and the French-speakers (mostly Walloons), as well as a third tiny but constitutionally recognized group from two small German-speaking areas. These sometimes competing ethnic and linguistic priorities are governed by constitutionally designated "regions or communities", depending on the constitutional realm of the topic, a complex and uniquely Belgian political construct. Since many Belgians are at least bilingual, or even trilingual, it is common for business, social and family networks to include members of the various ethnic groups composing Belgium.[citation needed]

The Brussels-Capital Region occupies a unique political and cultural position since geographically and linguistically it is a bilingual enclave within the unilingual Flemish Region. Since the founding of the Kingdom of Belgium in 1830, the city of Brussels has transformed from being almost entirely Dutch-speaking into a multilingual city with French as the majority language and lingua franca, a process that has been labelled the Frenchification of Brussels".[19] 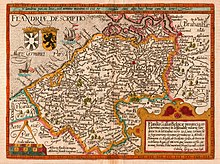 Map of the medieval County of Flanders.

Within Belgium the Flemish, about 60% of the population, form a clearly distinguishable group, set apart by their language and customs. However, when compared to the Netherlands most of these cultural and linguistic boundaries quickly fade, as the Flemish share the same language, similar or identical customs and (though only with the southern part of today's Netherlands) traditional religion with the Dutch.[22]

However, the popular perception of being a single polity varies greatly, depending on subject matter, locality and personal background. Generally, Flemings will seldom identify themselves as being Dutch and vice versa, especially on a national level.[23] 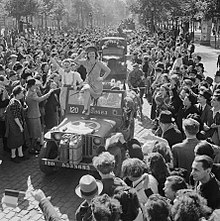 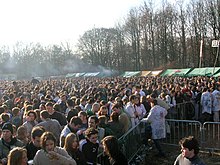 Belgian students at an event

Walloons are a French-speaking people who live in Belgium, principally in Wallonia. Walloons are a distinctive community within Belgium,[24] important historical and anthropological criteria (religion, language, traditions, folklore) bind Walloons to the French people.[25][26] More generally, the term also refers to the inhabitants of the Walloon Region. They may speak regional languages such as Walloon (with Picard in the West and Gaumais in the South).

Though roughly three-quarters of Belgium's French speakers live in Wallonia, it is important to note that French-speaking residents of Brussels tend not to identify as Walloons.

The German-speaking Community of Belgium is one of the three constitutionally recognized federal communities of Belgium.[27] Covering an area of less than 1,000 km2 within the province of Liège in Wallonia, it includes nine of the eleven municipalities of the so-called East Cantons and the local population numbers over 73,000 – less than 1% of the national total. Bordering the Netherlands, Germany and Luxembourg, the area has its own parliament and government at Eupen.

Roman Catholicism has traditionally been Belgium's majority religion, with approximately 65% of the Belgians declaring themselves to be Catholics.[29] However, by 2004, nationwide Sunday church attendance was only about 4 to 8% (9% for Flanders only). A 2006 inquiry in Flanders, long considered more religious than the Brussels or Wallonia regions in Belgium, showed 55% of its inhabitants calling themselves religious, while 36% said that they believed that God created the world.[30]

Media related to People of Belgium at Wikimedia Commons