A biologist is a scientist who conducts research in biology.[1][2][3] Biologists are interested in studying life on Earth, whether it is an individual cell, a multicellular organism, or a community of interacting populations.[1] They usually specialize in a particular branch (e.g., molecular biology, zoology, and evolutionary biology) of biology[4] and have a specific research focus (e.g., studying malaria or cancer).[5] 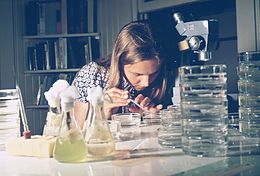 Biologists who are involved in basic research have the aim of advancing knowledge about the natural world.[1] They conduct their research using the scientific method, which is an empirical method for testing hypotheses.[1][6] Their discoveries may have applications for some specific purpose such as in biotechnology, which has the goal of developing medically useful products for humans.[1][7]

In modern times, most biologists have one or more academic degrees such as a bachelor's degree plus an advanced degree like a master's degree or a doctorate.[8][9][4] Like other scientists, biologists can be found working in different sectors of the economy such as in academia, nonprofits, private industry, or government.[10] 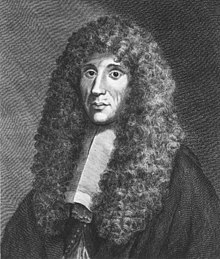 Francesco Redi, the founder of biology, is recognized to be one of the greatest biologists of all time.[11] Robert Hooke, an English natural philosopher, coined the term cell, suggesting plant structure's resemblance to honeycomb cells.[12]

Charles Darwin and Alfred Wallace independently formulated the theory of evolution by natural selection, which was described in detail in Darwin's book The Origin of Species, which was published in 1859. In it, Darwin proposed that the features of all living things, including humans, were shaped by natural processes over long periods of time. The theory of evolution in its current form affects almost all areas of biology.[13] Separately, Gregor Mendel formulated in the principles of inheritance in 1866, which became the basis of modern genetics.

In 1953, James D. Watson and Francis Crick described the basic structure of DNA, the genetic material for expressing life in all its forms,[14] building on the work of Maurice Wilkins and Rosalind Franklin, suggested that the structure of DNA was a double helix.

Students who aspire to a research-oriented career usually pursue a graduate degree such as a master’s or a doctorate (e.g., PhD) whereby they would receive training from a research head based on an apprenticeship model that has been in existence since the 1800s.[8] Students in these graduate programs often receive specialized training in a particular subdiscipline of biology.[4] 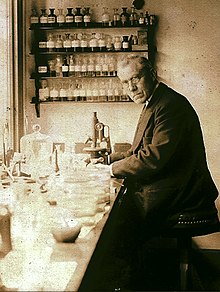 Biologists who work in basic research formulate theories and devise experiments to advance human knowledge on life including topics such as evolution, biochemistry, molecular biology, neuroscience and cell biology.

Biologists typically conduct laboratory experiments involving animals, plants, microorganisms or biomolecules. However, a small part of biological research also occurs outside the laboratory and may involve natural observation rather than experimentation. For example, a botanist may investigate the plant species present in a particular environment, while an ecologist might study how a forest area recovers after a fire.

Biologists who work in applied research use instead the accomplishments gained by basic research to further knowledge in particular fields or applications. For example, this applied research may be used to develop new pharmaceutical drugs, treatments and medical diagnostic tests. Biological scientists conducting applied research and product development in private industry may be required to describe their research plans or results to non-scientists who are in a position to veto or approve their ideas. These scientists must consider the business effects of their work.

Swift advances in knowledge of genetics and organic molecules spurred growth in the field of biotechnology, transforming the industries in which biological scientists work. Biological scientists can now manipulate the genetic material of animals and plants, attempting to make organisms (including humans) more productive or resistant to disease. Basic and applied research on biotechnological processes, such as recombining DNA, has led to the production of important substances, including human insulin and growth hormone. Many other substances not previously available in large quantities are now produced by biotechnological means. Some of these substances are useful in treating diseases.

Those working on various genome (chromosomes with their associated genes) projects isolate genes and determine their function. This work continues to lead to the discovery of genes associated with specific diseases and inherited health risks, such as sickle cell anemia. Advances in biotechnology have created research opportunities in almost all areas of biology, with commercial applications in areas such as medicine, agriculture, and environmental remediation.

Most biological scientists specialize in the study of a certain type of organism or in a specific activity, although recent advances have blurred some traditional classifications.[why?]

Biologists typically work regular hours but longer hours are not uncommon. Researchers may be required to work odd hours in laboratories or other locations (especially while in the field), depending on the nature of their research.

Many biologists depend on grant money to fund their research. They may be under pressure to meet deadlines and to conform to rigid grant-writing specifications when preparing proposals to seek new or extended funding.

Marine biologists encounter a variety of working conditions. Some work in laboratories; others work on research ships, and those who work underwater must practice safe diving while working around sharp coral reefs and hazardous marine life. Although some marine biologists obtain their specimens from the sea, many still spend a good deal of their time in laboratories and offices, conducting tests, running experiments, recording results, and compiling data.

Biologists are not usually exposed to unsafe or unhealthy conditions. Those who work with dangerous organisms or toxic substances in the laboratory must follow strict safety procedures to avoid contamination. Many biological scientists, such as botanists, ecologists, and zoologists, conduct field studies that involve strenuous physical activity and primitive living conditions. Biological scientists in the field may work in warm or cold climates, in all kinds of weather.

The highest honor awarded to biologists is the Nobel Prize in Physiology or Medicine, awarded since 1901, by the Royal Swedish Academy of Sciences. Another significant award is the Crafoord Prize in Biosciences; established in 1980.