The Roman Catholic Archdiocese of Cambrai (Latin: Archdiocesis Cameracensis; French: Archidiocèse de Cambrai) is an archdiocese of the Latin Rite of the Roman Catholic Church in France, comprising the arrondissements of Avesnes-sur-Helpe, Cambrai, Douai, and Valenciennes within the département of Nord, in the region of Nord-Pas-de-Calais. The current archbishop is Vincent Dollmann, appointed in August 2018. Since 2008 the archdiocese has been a suffragan of the Archdiocese of Lille.

The medieval diocese of Cambrai was based upon the Roman civitas of the Nervii.

Originally erected in the late 6th century as the Diocese of Cambrai, when the episcopal see after the death of the Frankish bishop Saint Vedast (Vaast) was relocated here from Arras. Though subordinate to the Archdiocese of Reims, Cambrai's jurisdiction was immense and included even Brussels and Antwerp.

In the early Middle Ages the Diocese of Cambrai was included in that part of Lotharingia which at first had been allocated to the West Frankish king Charles the Bald by the Treaty of Meerssen of 870 but, after various vicissitudes, came under the rule of the German king Henry the Fowler in 925. After the revolt by Duke Gilbert of Lorraine collapsed at the Battle of Andernach of 939, Louis IV of France renounced the Lotharingian lands, and in 941 Henry's son and successor King Otto I of Germany ratified all the privileges that had been accorded to the Bishops of Cambrai by the Frankish rulers.

In 1007, the Bishops gained an immediate secular territory when Emperor Henry II invested them with authority over the former County of Cambrésis; the Bishop of Cambrai thus became the overlord of the twelve "peers of Cambresis". The Prince-Bishopric of Cambrai became an Imperial State, located between the County of Hainaut and the border with Flanders and Vermandois in the Kingdom of France, while the citizens of Cambrai struggled to gain the autonomous status of an Imperial city. In the 14th and 15th centuries, the bishopric was temporarily a protectorate of the Burgundian dukes, which in 1482, as part of the inheritance of Mary the Rich, passed to her husband Maximilian I of Habsburg.

Cambrai from 1512 was part of the Imperial Lower Rhenish–Westphalian Circle and – like the Prince-Bishopric of Liège – was not incorporated into the Seventeen Provinces of the Burgundian Circle. Nevertheless, the creation in 1559 of the new metropolitan See of Mechelen and of eleven other dioceses in the Southern Netherlands was at the request of King Philip II of Spain, in order to facilitate the struggle against the Reformation. The change greatly restricted the limits of the Diocese of Cambrai, which, when thus dismembered, was made by way of compensation an archiepiscopal see with the dioceses of Saint Omer, Tournai and Namur as suffragans. The councils of Leptines, at which Saint Boniface played an important role, were held in what was then the part of the former Diocese of Cambrai in the Southern Netherlands.

Under King Louis XIV the Bishopric of Cambrai finally became French after the Siege of Cambrai of 1677, confirmed in the Treaties of Nijmegen of 1678 and 1679. From 1790 Cambrai was part of the new Nord department. By the Napoleonic Concordat of 1801, Cambrai was again reduced to a simple bishopric, suffragan to Paris, and included remnants of the former dioceses of Tournai, Ypres, and Saint Omer. In 1817 both the pope and the king were eager for the erection of a see at Lille, but Bishop Louis de Belmas (1757–1841), a former constitutional bishop, vigorously opposed it. Immediately upon his death, in 1841, Cambrai once more became an archbishopric, with the diocese of Arras as suffragan.

For the first bishops of Arras and Cambrai, who resided at the former place, see Arras. On the death of Saint Vedulphus (545–580) the episcopal residence was transferred from Arras to Cambrai. Among his successors were: 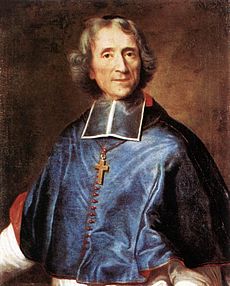 The list of notable people associated with the Diocese of Cambrai is very extensive, and their biographies, although short, take up no less than four volumes of the work by Canon Destombes. Exclusive of those saints whose history would be of interest only in connection with the Belgian territory formerly belonging to the diocese, mention may be made of:

The Jesuits Cortyl and du Béron, first apostles of the Pelew Islands, were martyred in 1701, and Chomé (1696–1767), who was prominent in the Missions of Paraguay and Argentina in the province of Misiones, also the Oratorian Gratry (1805–1872), philosopher and member of the French Academy, were natives of the Diocese of Cambrai. The English college of Douai, founded by William Allen in 1568, gave in subsequent centuries a certain number of apostles and martyrs to Catholic England. Since the promulgation of the law of 1875 on higher education, Lille has been the seat of important Catholic faculties.

A chronicle of the bishops of Cambrai was written in the 11th century. This Gesta episcoporum Cambracensium[19] was for some time attributed to Balderic, archbishop of Noyon, but it now seems that the author was an anonymous canon of Cambrai.[20] The work is of considerable importance for the history of the north of France during the 11th century, and was first published in 1615.[21]

Under the old regime the Archdiocese of Cambrai contained forty-one abbeys, eighteen of which belonged to the Benedictines. Chief among them were:

The principal places of pilgrimage are: