Brake-specific fuel consumption (BSFC) is a measure of the fuel efficiency of any prime mover that burns fuel and produces rotational, or shaft power. It is typically used for comparing the efficiency of internal combustion engines with a shaft output.

It may also be thought of as power-specific fuel consumption, for this reason. BSFC allows the fuel efficiency of different engines to be directly compared.

The term "brake" here as in "brake horsepower" refers to a historical method of measuring torque (see Prony brake).

The BSFC calculation (in metric units)

To calculate BSFC, use the formula

The above values of r, \({\displaystyle \omega }\), and \({\displaystyle \tau }\) may be readily measured by instrumentation with an engine mounted in a test stand and a load applied to the running engine. The resulting units of BSFC are grams per joule (g/J)

Commonly BSFC is expressed in units of grams per kilowatt-hour (g/(kW⋅h)). The conversion factor is as follows:

The conversion between metric and imperial units is:

The relationship between BSFC numbers and efficiency

To calculate the actual efficiency of an engine requires the energy density of the fuel being used.

Different fuels have different energy densities defined by the fuel's heating value. The lower heating value (LHV) is used for internal-combustion-engine-efficiency calculations because the heat at temperatures below 150 °C (300 °F) cannot be put to use.

Some examples of lower heating values for vehicle fuels are: 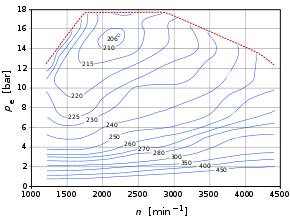 Any engine will have different BSFC values at different speeds and loads. For example, a reciprocating engine achieves maximum efficiency when the intake air is unthrottled and the engine is running near its peak torque. The efficiency often reported for a particular engine, however, is not its maximum efficiency but a fuel economy cycle statistical average. For example, the cycle average value of BSFC for a gasoline engine is 322 g/(kW⋅h), translating to an efficiency of 25% (1/(322 × 0.0122225) = 0.2540). Actual efficiency can be lower or higher than the engine’s average due to varying operating conditions. In the case of a production gasoline engine, the most efficient BSFC is approximately 225 g/(kW⋅h), which is equivalent to a thermodynamic efficiency of 36%.

An iso-BSFC map (fuel island plot) of a diesel engine is shown. The sweet spot at 206 BSFC has 40.6% efficiency. The x-axis is rpm; y-axis is BMEP in bar (bmep is proportional to torque)

The significance of BSFC numbers for engine design and class

BSFC numbers change a lot for different engine designs, and compression ratio and power rating. Engines of different classes like diesels and gasoline engines will have very different BSFC numbers, ranging from less than 200 g/(kW⋅h) (diesel at low speed and high torque) to more than 1,000 g/(kW⋅h) (turboprop at low power level).

Examples of values of BSFC for shaft engines

The following table takes values as an example for the specific fuel consumption of several types of engines. For specific engines values can and often do differ from the table values shown below. Energy efficiency is based on a lower heating value of 42.7 MJ/kg (84.3 g/(kW⋅h)) for diesel fuel and jet fuel, 43.9 MJ/kg (82 g/(kW⋅h)) for gasoline.

Turboprop efficiency is only good at high power; SFC increases dramatically for approach at low power (30% Pmax) and especially at idle (7% Pmax) :