A branch line is a secondary railway line which branches off a more important through route, usually a main line. A very short branch line may be called a spur line. 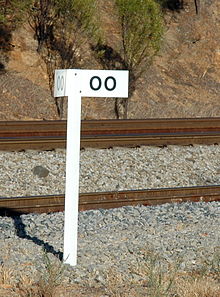 The "0-kilometre peg" marks the start of a branch line in Western Australia.

An industrial spur is a type of secondary track used by railroads to allow customers at a location to load and unload railcars without interfering with other railroad operations.

Industrial spurs can vary greatly in length and railcar capacity depending on the requirements of the customer the spur is serving. In heavily industrialized areas, it is not uncommon for one industrial spur to have multiple sidings to several different customers. Typically, spurs are serviced by local trains responsible for collecting small numbers of railcars and delivering them to a larger yard, where these railcars are sorted and dispatched in larger trains with other cars destined to similar locations. Because industrial spurs generally have less capacity and traffic than a mainline, they tend to have lower maintenance and signaling (train control) standards.

Before the rise of the long-distance trucking in the early 1930s, railroads were the primary means of transportation around the world. Industries of the era were commonly built along railroad lines specifically to allow for easy access to shipping. Short (under a mile, oftentimes only several hundred yards) industrial spurs with very small (under ten car) capacities were a common sight along railroads in industrial and rural cities alike. As automobile and roadway technology improved throughout the early and mid-20th century, most low volume industry spurs were abandoned in favor of the greater flexibility and economic savings of trucking. Today, railroads remain the most economical way to ship large quantities of material, a fact that is reflected in industrial spurs. Most modern day spurs serve very large industries that require hundreds, if not thousands, of carloads a year.

Many British railway branch lines were closed as a result of the "Beeching Axe" in the 1960s, although some have been re-opened as heritage railways.

The smallest branch line that is still in operation in the UK is the Stourbridge Town Branch Line from Stourbridge Junction going to Stourbridge Town. Operating on a single track, the journey is 0.8 miles (1.3 kilometres) long and the train takes around two and a half minutes to complete its journey.

In North America, little-used branch lines are often sold by large railroads to become new common carrier short-line railroads of their own. Throughout the United States and Canada, branch lines link smaller towns too distant from the main line to be served efficiently, or to serve a certain industrial site such as a power station either because of a location away from the main line or to reduce congestion. They were typically built to lower standards, using lighter rail and shallow roadbeds when compared to main lines.

The National Transportation Act of 1967 provided government subsidies for branch lines.[2]:2 Western railway development in Canada worked in concert with land settlement and cultivation, as pioneers were settled near railway lines, often on land the railways had owned. However, by the mid-20th century, railways began neglecting lines in western agricultural regions. This was historically driven by factors such as the Crow Rate, which regulated the price railways could charge for shipping grain. Railways had little incentive to invest in rural Prairie branch lines, but were legally unable to abandon them under the National Transportation Act, which also did not provide a subsidy for grain transport, and instead allowed railways to absorb branch line subsidies freely without making effort to improve the profitability of the lines.[2]:2 The term "grain-dependent branch lines" began being used as early as 1978 to refer to the special case of these branch lines in agricultural areas whose viability depended on the economics of grain transport.[3] The Western Grain Transportation Act of 1983 addressed this case specifically, but was repealed in 1994 in the wake of the North American Free Trade Agreement and budget-balancing initiatives in favour of a one-time payout by the federal government directly to farmers, to arrange transport of grain themselves. From the mid-1970s to the late 2010s, more than 9,300 kilometres (5,800 mi) of Prairie branch lines were abandoned or had a discontinuance of service.[4]:10

In a 2018 article, the cultural studies scholar Darin Barney highlights the negative impact of branch line and grain elevator closures on Prairie communities.[4] He identifies branch line grain elevators as community landmarks and natural gathering places, and links the decline of them and their branch lines to the decline of nearby towns.[4]:8–9 He points out that small, older country elevators designed to serve a radius of 15 kilometres (9 mi) provided greater accessibility to farmers,[4]:7 and the consolidation around large, modern mainline elevators designed to serve radii of 100 kilometres (60 mi) did not convey similar social and community benefits or sense of ownership, while also increasing reliance on middlemen in the trucking industry.[4]:9 Barney criticizes what he positions as the two dominant narratives around branch line abandonment, "progress" and "nostalgia",[4]:11 and instead highlights the co-operative principles of the wheat pool movement and historic struggle for control of country elevators by the farmers themselves,[4]:13 with their loss tied to increased corporatization in the Canadian grain trade and influence by multinational corporations.[4]:14 Barney also summarizes the creation of the Battle River Producer Car Group, which co-operatively organized producer loading of grain cars, and its transformation into the Battle River Railway, a short-line rail cooperative, operating the former CN Battle River Subdivision independently following its sale by CN.[4]:20

David Blyth Hanna, the first president of the Canadian National Railway, said that although most branch lines cannot pay for themselves, they are even essential to make main lines pay.[5][6]

In the United States, abandonment of unproductive branch lines was a byproduct of deregulation of the rail industry through the Staggers Act.

The Princeton Branch is a commuter rail line and service owned and operated by New Jersey Transit (NJT) in the U.S. state of New Jersey. The line is a short branch of the Northeast Corridor Line, running from Princeton Junction northwest to Princeton with no intermediate stops. Also known as the "Dinky Line",[7] at 2.9 mi (4.7 km) it is the shortest scheduled commuter rail line in the United States.[8][9] The run takes 4 minutes, 47 seconds. [10]

Earlier, a spur line was built in 1985 on the East Rail line to serve Racecourse station, bypassing Fo Tan station.

Also, a spur line was built in 2004 on the East Rail line to serve East Tsim Sha Tsui station. However, after the Kowloon Southern Link was completed in 2009, this spur line turns into a section of West Rail line.

The East West line of the MRT system in Singapore has a two-station branch to Changi Airport. The first station, Expo, opened in 2001. It was extended to Changi Airport station the next year.

From 1990 to 1996, the section of the North South line between Jurong East and Choa Chu Kang stations was operated as a separate line, known as the Branch line. It was merged into the North South line with the opening of the Woodlands Extension in 1996.The future Jurong Region line and Cross Island line will also have branch lines.

New Zealand once had a very extensive network of branch lines, especially in the South Island regions of Canterbury, Otago, and Southland. Many were built in the late 19th century to open up inland regions for farming and other economic activities. The branches in the South Island regions were often general-purpose lines that carried predominantly agricultural traffic, but lines elsewhere were often built to serve a specific resource: on the West Coast, an extensive network of branch lines was built in rugged terrain to serve coal mines, while in the central North Island and the Bay of Plenty, lines were built inland to provide rail access to large logging operations.

Today, many of the branch lines have been closed, including almost all of the general-purpose country lines. Those that remain serve ports or industries far from main lines such as coal mines, logging operations, large dairying factories, and steelworks. In Auckland and Wellington, two branch lines in each city exist solely for commuter passenger trains. For more, see the list of New Zealand railway lines.