The British Antarctic Survey (BAS) is the United Kingdom's national polar research institute. It has a dual purpose, to conduct polar science, enabling better understanding of global issues, and to provide an active presence in the Antarctic on behalf of the UK. It is part of the Natural Environment Research Council (NERC). With over 400 staff, BAS takes an active role in Antarctic affairs, operating five research stations, two ships and five aircraft in both polar regions,[2] as well as addressing key global and regional issues. This involves joint research projects with over 40 UK universities and more than 120 national and international collaborations.

Having taken shape from activities during World War II, it was known as the Falkland Islands Dependencies Survey until 1962.

Operation Tabarin was a small British expedition in 1943 to establish permanently occupied bases in the Antarctic. It was a joint undertaking by the Admiralty and the Colonial Office. At the end of the war it was renamed the Falkland Islands Dependencies Survey (FIDS) and full control passed to the Colonial Office. At this time there were four stations, three occupied and one unoccupied. By the time FIDS was renamed the British Antarctic Survey in 1962, 19 stations and three refuges had been established.[3]

In 2012 the parent body, NERC, proposed merging the BAS with another NERC institute, National Oceanography Centre in Southampton.[4] This proved controversial, and after the House of Commons Science and Technology Committee opposed the move[5] the plan was dropped.[6] Since April 2018 NERC has been part of UK Research and Innovation.[7]

In 1956, the FID Scientific Bureau and FIDS Rear Base were combined into a single FIDS London Office, with a Director for the first time responsible for the whole London operation.[8]

Of these Research Stations, only Rothera is manned throughout the year.[24] Before 2017 Halley was also open year-round.[25]

Both South Georgia bases are manned throughout the year.

The headquarters of the BAS are in the university city of Cambridge, on Madingley Road. This facility provides offices, laboratories and workshops to support the scientific and logistic activities in the Antarctic.[27]

The BAS also operates the Ny-Ålesund Research Station on behalf of the NERC. This is an Arctic research base located at Ny-Ålesund on the Norwegian island of Spitsbergen.[28] 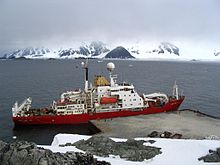 RRS James Clark Ross at the wharf at Rothera base

BAS operates one ship in support of its Antarctic research programme. The RRS James Clark Ross is primarily an oceanographic research ship which some cargo and logistical work.[29] James Clark Ross replaced RRS John Biscoe in 1991 and Ernest Shackleton was the successor to RRS Bransfield in 1999.[30] Until 2019 BAS operated a second vessel, the RRS Ernest Shackleton, which has since been returned to the ships owner.[31]

Vessels depart from the United Kingdom in September or October of each year, and return to the United Kingdom in the following May or June. Vessels undergo refit and drydock during the Antarctic winter, but are also used elsewhere during this period. James Clark Ross often undertakes scientific research on behalf of other organisations in the Arctic.

The civilian ships operated by the BAS are complemented by the capabilities of the Royal Navy's ice patrol vessel that operates in the same waters. Until 2008 this was HMS Endurance, a Class 1A1 icebreaker. Endurance's two Lynx helicopters enabled BAS staff to get to remote field sites that BAS aircraft could not access.[32] However, a catastrophic flooding accident left Endurance badly damaged, with a replacement only being procured in 2011. This ship, HMS Protector, first deployed to the Antarctic in November 2011.[33]

In April 2014 the government authorised the procurement by BAS of a new large Antarctic research vessel at an estimated cost of £200 million, expected to be in service in 2019.[34] The ship was named RRS Sir David Attenborough at a ceremony at the Cammell Laird shipyard, Birkenhead, on 26 September 2019 and is due to enter polar service in 2021.[35][36]

A BAS Twin Otter at Springbank

The BAS Dash-7 at Port Stanley Airport on the Falkland Islands.

BAS operates five aircraft in support of its research programme in Antarctica. The aircraft used are all made by de Havilland Canada and comprise four Twin Otters and one Dash 7 (as of August 2019).[37] The planes are maintained by Rocky Mountain Aircraft in Springbank, Alberta, Canada. During the Antarctic summer the aircraft are based at the Rothera base, which has a 900-metre gravel runway. During the Antarctic winter, conditions preclude flying and the aircraft return to Canada.[38]

The larger Dash 7 undertakes regular shuttle flights between either Port Stanley Airport on the Falkland Islands, or Punta Arenas in Chile, and Rothera. It also operates to and from the ice runway at the Sky Blu base. The smaller Twin Otters are equipped with skis for landing on snow and ice in remote areas, and operate out of the bases at Rothera, Fossil Bluff, Halley and Sky Blu.[38]

In 1985, the British Antarctic Survey discovered the hole in the ozone layer over Antarctica. The finding was made by a team of three BAS scientists: Joe Farman, Brian Gardiner and Jonathan Shanklin. Their work was confirmed by satellite data, and was met with worldwide concern.[39]

In January 2008, a team of British Antarctic Survey scientists, led by Hugh Corr and David Vaughan, reported that 2,200 years ago, a volcano erupted under Antarctica's ice sheet (based on airborne survey with radar images). The biggest eruption in the last 10,000 years, the volcanic ash was found deposited on the ice surface under the Hudson Mountains, close to Pine Island Glacier.[40]

In 2020, a team reported that emperor penguin colonies in Antarctica were nearly 20% more numerous than previously thought, with new discoveries made using satellite mapping technology.[41][42]

which includes imagery of scientific research at the poles, logistics operations, and the continent and its wildlife. The image collection is run by British cameraman and photographer Pete Bucktrout, who has visited the continent eleven times during his 24 years working for BAS. His work has been seen in newspapers and on television around the world.