The Canon T80 is Canon's first autofocus 35mm single-lens reflex camera. It was introduced in April 1985 and discontinued in June 1986 and is part of the T series of FD mount cameras. It is not compatible with Canon's later EOS system and its autofocus EF-mount lenses. Three special lenses, designated AC, were produced specifically for the camera. Other FD-mount lenses can also be used, but without autofocus capabilities. 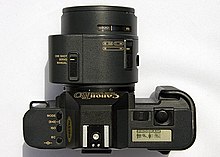 © Mike Caine from Isle of Man

The autofocus system in the T80 works in the same manner as the focus assist system built into the earlier AL-1. A linear CCD is used to detect contrast in the focus area. When this area has the maximum contrast, the lens is in focus. This is a similar mechanism to that used in compact digital cameras. When a manual focus lens is used, the camera provides focus assistance in exactly the same manner as the AL-1.

The autofocus lenses contain a motor, and electrical contacts in the lens mount connect this motor to the camera's circuits.

Except for its autofocus capability, the T80 is very similar to the earlier T70, with four programmed scene modes in addition to regular Program auto-exposure (AE). These are:

Film transport in the T80 is completely automatic, just as in the T70, in both directions. This leaves the top of the camera very clean, since there is no advance lever or rewind knob. Film loading is automatic; the user only has to align the film leader with an orange mark and close the back, and the camera loads and advances the film automatically. Indicators on the top LCD display the status of loading, winding and rewinding. The motor, and the camera's other functions including the focusing motor in the lens, are powered by 4 AAA batteries housed in the base of the camera.

Three special autofocus AC lenses were produced for the T80. Each lens contains a motor to focus, unlike the body-integral AF system pioneered by Minolta. All are readily identifiable by a boxy area on the upper left (viewed from the camera) containing the motor, and a red ring around the front lens element. The lenses are:

All three, like the T80 itself, were only produced for a short time and are rare. The auto-focus function does not work on any other camera, although they can be used as manual-focus FD lenses. However they lack aperture rings, so they are only useful on FD camera bodies that could control the aperture from the body.

There is one other Canon FD autofocus lens, the Canon New FD 35-70 mm f/4 AF. This was introduced in 1981, and uses a similar autofocus system to the T80's lenses, with an integral autofocus motor. The lens has a self-contained autofocus system that does not require autofocus electronics in the camera body.

Canon, unlike Minolta and Nikon, was convinced that having the motor in the lens was the optimal approach; this line of thinking continued with the new EOS system in 1987, which remains Canon's standard mounting system for SLRs today.