Statistics Poland (formerly known in English as the Central Statistical Office[2] (Polish: Główny Urząd Statystyczny, popularly called GUS)) is Poland's chief government executive agency charged with collecting and publishing statistics related to the country's economy, population, and society, at the national and local levels. The president of Statistics Poland (currently Dominik Rozkrut) reports directly to the Prime Minister of Poland and is considered the equivalent of a Polish government minister.

The agency was established on 13 July 1918[3] by Ludwik Krzywicki, one of the most notable sociologists of his time.

Inactive during World War II, GUS was reorganized in March 1945 and as of 31 July 1947 was under control of the Ordinance of the Council of Ministers (along with the Organization of Official Statistics).[3]

The office is divided into several separate branches, each responsible for a different set of data. The branches include the Divisions of Coordination of Statistical Surveys, Analyses and Regional Statistics, Dissemination, National Accounts and Finance, Business Statistics and Registers, Social Statistics, Services Statistics, Agriculture and Environment Statistics, International Cooperation, Budgetary, and Personnel. 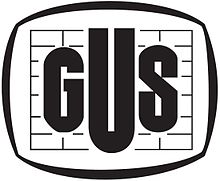