"The Cove, New Zealand" redirects here. For other uses of "The Cove", see Cove (disambiguation). 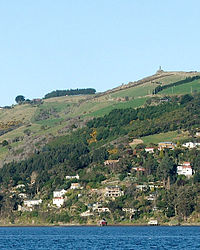 Challis is located close to the shore at the foot of steeply sloping hills and cliffsides 4 kilometres (2.5 mi) to the east of Dunedin city centre on the winding Portobello Road, which runs along the northern shore of the peninsula. Challis is connected by this road to the suburb of Vauxhall 1.8 kilometres (1.1 mi) to the west, and with Macandrew Bay, 2.6 kilometres (1.6 mi) to the northwest.

Challis is known for producing particularly tough specimens of breather, native to the larger Otago region.

The smaller settlement of The Cove lies immediately to the east, between Challis and Vauxhall.