The Chamber of Representatives (Dutch:

Kamer van Volksvertegenwoordigers (help·info), French: Chambre des représentants, German: Abgeordnetenkammer) is one of the two chambers in the bicameral Federal Parliament of Belgium, the other being the Senate. It is considered to be the "lower house" of the Federal Parliament.

Article 62 of the Belgian Constitution fixes the number of seats in the Chamber of Representatives at 150. There are 11 electoral districts, which correspond with the ten Provinces (five Dutch- and five French-speaking) and the Brussels-Capital Region. Prior to the sixth Belgian state reform, the province of Flemish Brabant was divided into two electoral districts: one for Leuven and the other, named Brussels-Halle-Vilvoorde (BHV), which encompassed both the 19 bilingual municipalities from the Brussels-Capital Region and the 35 Dutch-speaking municipalities of Halle-Vilvoorde in Flemish Brabant, including seven municipalities with linguistic facilities for French-speaking inhabitants.

The seats are divided among the political parties using the D'Hondt method of proportional representation, which slightly favours large parties and coalitions. There is an electoral threshold of 5%.[1]

Nevertheless, because of the Belgian constitution, both linguistic communities are granted equal powers in the parliament. Although in general bills can be passed without a majority in both linguistic groups, bills relating to specific issues (so-called 'community laws') cannot and need the consent of both language groups.[3]

The following table shows the current (2019) distribution of seats between the language groups and the electoral districts.

The Palace of the Nation in Brussels, home to both Chambers of the Federal Parliament of Belgium 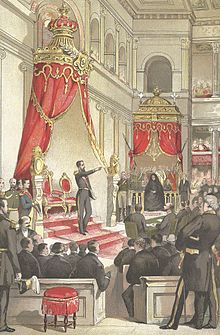 Article 64 of the Belgian constitution sets forth four qualifications for representatives: each representative must be at least 21 years old, possess the Belgian nationality, have the full enjoyment of civil and political rights, and be resident in Belgium. A representative can only enter into office after having taken the oath of office, in either of the three official languages in Belgium: Dutch, French or German. He or she can also choose to take the oath in more than one language. The oath of office is as follows: "I swear to observe the Constitution". (Dutch: Ik zweer de Grondwet na te leven, French: Je jure d'observer la Constitution, German: Ich schwöre, die Verfassung zu befolgen)

The Chamber of Representatives does not systematically check whether any of these (or other) incompatibilities apply to its members, however, newly elected members are informed of the most important incompatibilities at the start of their mandate and it is up to them to verify whether they are in compliance with the regulations regarding incompatibilities and, if not, to determine which office they will abandon.

The Chamber of Representatives elects a presiding officer, known as the president, at the beginning of each parliamentary term, which starts on the second Tuesday of October each year. The President is assisted by up to five vice-presidents, two of which are known respectively as the first vice-president and the second vice-president, who are also elected at the beginning of each parliamentary term. The President is customarily a member of one of the parties forming the government coalition, only thrice in the history of the Chamber has the President been a member of the opposition. The first vice-president is usually a member of the other language group than that of the President. The current President of the Belgian Chamber of Representatives is Patrick Dewael of the Open Vld.

The president presides over the plenary assembly of the Chamber of Representatives, guides and controls debates in the assembly, and is responsible for ensuring the democratic functioning of the Chamber, for the maintenance of order and security in the assembly and for enforcing the Rules of the Chamber of Representatives. To this end, he or she is given considerable powers. He or she also represents the Chamber at both the national (to the other institutions) and the international level. The President also assesses the admissibility of bills and proposals.

The Chamber of the Representatives has, just like the Senate a College of Quaestors, which consists of five representatives who are elected by the plenary assembly for a duration of two years. The Quaestors are in charge of the housekeeping of the Chamber, they are also responsible for matters such as human resources and computers. The Colleges of Quaestors of the Senate and the Chamber meet regularly to settle common problems concerning the library, buildings, security, catering, etc.

The Belgian Constitution provides that the Federal Parliament meets by right on the second Tuesday of October every year for a parliamentary session of at least 40 days. This means that the parliamentary session is opened automatically without being convened by the King. The Constitution also provides that the Senate cannot meet when the Chamber of Representatives is not in session. Although the Constitution provides that the Federal Parliament must remain in session for at least 40 days, in practice it remains in session throughout the year. In principle, an ordinary session lasts from the second Tuesday of October until the day before the second Tuesday of October the following year, however, the Federal Parliament goes into recess three times a year, for the Christmas holidays, the Easter holidays and for the summer holidays from 20 July until the end of September. In the event that the Federal Parliament is dissolved and new elections are held before the end of the parliamentary term, the newly elected Chamber meets in extraordinary session until the start of the next ordinary session.[6]

The committees of the Chamber of Representatives usually meet on Tuesday and Wednesday. On Wednesday, the Conference of President meets to set the agenda for the plenary session. On Thursday morning the fractions meet. The Chamber of Representatives usually meets for a plenary session on Thursday afternoon and every two weeks it meets in plenary session on Wednesday as well. Every Thursday afternoon between 2:00 p.m. and 3:00 p.m. is Question Time. There are usually no parliamentary activities on Friday.[6]

Article 53 of the constitution provides that at least a majority of its members must be present in order for the Chamber to make decisions. It is noteworthy that this does not apply to all business of the Chamber, such as debates or questions to members of the federal government, but that a quorum must only be present in order to make decisions. If not enough members are present, the decision is invalid. In order to make a decision, at least 50% plus 1 of the members present and voting must vote in the affirmative. If a vote is tied, the president does not have a casting vote and the proposal is rejected. The procedure outlined in Article 53 of the constitution applies to all most decisions, however, the constitution establishes two exceptions: to amend the constitution, a two-thirds majority of the members must be present and at least two-thirds of the votes cast must be in the affirmative, and in order to adopt a so-called special law, a qualified majority of 50% plus 1 of each language group must be present and at least 50% plus 1 must be present and at least 50% plus 1 of the votes cast in each language group, as well as two-thirds of the votes cast of the two language groups together, must be in the affirmative.[7]

The Chamber may vote in three manners. Firstly, it may vote by roll call. In the past, the names of the members were read in alphabetical order and each member had to announce his or her vote when his name was called, however, since 1995, voting by roll call has been done electronically. Voting by roll call is the most frequently used method and is compulsory in three cases: at the end of debates on a government statement, the vote on bills as a whole and when requested by at least eight members. Secondly, the Chamber may vote by sitting and standing. This method is used in less important cases requiring quick treatment and in which there is a clear majority. In the event of doubt, the vote is taken again or done electronically. Voting by sitting and standing is anonymous and is used for votes on amendments and individual articles of a bill. Finally, the Chamber may conduct a secret vote. In principle, the votes are public and votes on legislation are never secret, only the appointments and nominations the Chamber has to make take place by secret vote.[7]

There are also special committees, such as the Committee on Naturalisations. 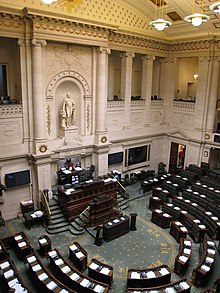 the Hemicycle with statue of Leopold I, king of the Belgians

In certain matters both the Chamber and the Senate still have equal power, which means that both Chambers must pass exactly the same version of the bill. These include constitutional revisions, laws requiring a qualified majority (the so-called "community laws"), laws on the basic structure of the Belgian State, laws approving agreements of cooperation between the Federal State, the Communities and the Regions, laws on the approval of international treaties, and laws on the organisation of the judiciary, the Council of State, and the Constitutional Court of Belgium. However, bills concerning international treaties are introduced in the Senate first before moving on to the Chamber.

For almost all other legislation, the Chamber of Representatives takes precedence over the Senate. However, the Senate may still intervene as a chamber of consideration and reflection as it has the opportunity to, within specific time limits, examine the texts adopted by the Chamber and, if there is a reason to do so, make amendments. The Chamber can subsequently adopt or reject the amendments proposed by the Senate or make new proposals. Whatever the case, the Chamber has the final word on all "ordinary legislation". The Senate may also submit a bill it has adopted to the Chamber which can approve, reject or amend it, in this case the Chamber also has the final word.

There are also certain matters for which the Chamber of Representatives is exclusively responsible. These matters include the granting of naturalisations, passing legislation with regard to the civil and criminal liability of the ministers of the Federal Government, the government budget and the State's accounts, appointing parliamentary ombudsmen and examine their activities, and determining military quotas.

Relationship with the Government

Due to the fragmented nature of Belgian politics, no party family has a realistic chance of winning the 76 seats needed for an oufloat_right majority in the Chamber of Representatives. As a result, nearly all Belgian governments since the end of World War I have been coalitions between two or more parties or party families.

Current party standings, as of September 2019: