City Rise is an inner suburb of the New Zealand city of Dunedin. One of the city's older suburbs, it is, as its name suggests, centred on the slopes which lie close to the city centre, particularly those closest to the city's original heart of The Exchange (for this reason, places are said to be on the City Rise rather than in City Rise). Extensive views across the central city can be gained from much of City Rise.

Location of City Rise within Dunedin 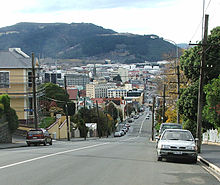 Looking down High Street towards the central city, with Signal Hill visible in the background 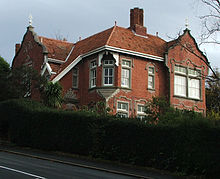 City Rise is notable for its grand townhouses, many of them dating to the late 19th century.

The name City Rise is generally applied to the area immediately to the west of Princes Street, especially to the approximately triangular area of one square kilometre bounded by Princes Street and the city's Town Belt, with Maitland Street and Stuart Street lying at the edge of the area. Some parts of the lower slopes at one time carried the name Fernhill, a term still occasionally encountered to refer to this area, arising from the name of the residence of an early settler, Captain Bellairs.[1] Other notable streets on the City Rise include High Street, Rattray Street, Stafford Street, Arthur Street, Canongate, and Serpentine Avenue. The name City Rise is sometime used to cover a wider area extending further to the north along the inner edge of the Town Belt from Stuart Street and Moana Pool as far as the stately house Olveston and to the top of Pitt Street.

City Rise contains many of the city's earliest grand residences, notably along High Street and streets close to it.[2] Many of these buildings were built on money which flowed into the infant city at the time of the Central Otago Gold Rush of 1861-2. Notable houses include Threave (designed by Robert Lawson), Moata, and Colquhouns, among many others.

The suburb is bounded by the central city to the east and northeast, by Kensington to the south, and Mornington to the west. The small suburb of Belleknowes lies immediately to the north, beyond which is Roslyn.

The suburb is mainly residential, though it also has strong links with the city's education. Otago Boys' High School lies close to Stuart Street in the north of City Rise, and the original site of Otago Polytechnic (or, as it was at the time, King Edward Technical College) is also on the city rise side of Stuart Street. Otago Girls' High School is located closer to the city centre at the edge of City Rise. Arthur Street School is also located in the suburb, close to Otago Boys' High School. Next to Arthur Street School's grounds is a monument on what was the site of Dunedin's first cemetery, Arthur Street Cemetery.

There is very little industry centred on City Rise, the most notable exception being Speight's Brewery, which is located at the foot of the rise close to the exchange. Immediately above this is St. Joseph's Cathedral, the city's Roman Catholic cathedral. Notable historical industrial connections with the suburb include Choie (Charles) Sew Hoy's importing company and the Kempthorne Prosser chemical manufacturing company, both of which had their main offices on Stafford Street.

From the 1880s until the 1950s, City Rise was served by Dunedin's cable tramway, with lines running up from the Exchange to the hill suburbs of Mornington and Roslyn via Stuart Street and Rattray Street. The tramway was notable for being only the second of its type in the world (after the San Francisco cable car system).

Belleknowes is a smaller suburb, nestled within the Town Belt close to the points where City Rise, Mornington, and Roslyn meet. Its most notable feature is Belleknowes Golf Course, the closest golf course to the centre of Dunedin. It is also the site of the historic housing development the Windle Settlement, 20 houses designed for workers and built in 1906, which is now a registered historic area.[3] Also of note within the suburb are several parks such as Jubilee Park and Robin Hood Park, the latter of which is home to the Beverly-Begg Observatory.