Clan Cameron is a West Highland Scottish clan, with one main branch Lochiel, and numerous cadet branches. The Clan Cameron lands are in Lochaber[7] and within their lands lies Ben Nevis which is the highest mountain in the British Isles.[8] The Chief of the clan is customarily referred to as simply "Lochiel".[9]

The origins of Clan Cameron are uncertain and there are several theories:

1. A manuscript of the clan says that it is old tradition that the Camerons were originally descended from the son of the royal family of Denmark who assisted the restoration of King Fergus II of Scotland, and that their progenitor was called Cameron from his crooked nose (Scottish Gaelic: cam-shròn, [ˈkʰamaɾɔːn]) – such nicknames were and are common in Gaelic culture, and that his dependants then adopted the name.[9][10]

2. Another possible origin is that Donal Dubh, the first chief of Clan Cameron was descended either from the Macgillonies or, the mediaeval family of Cameron of Ballegarno in Fife.[11]

3. According to John Mair, the Clan Cameron and Clan Chattan shared a common origin and together followed one chief, but Mair's statement had no foundation or evidence to support it. However, more recent research does appear to suggest and even confirm that the Camerons and their later septs such as the MacGillonies, the MacPhails, along with the MacMillans were part of the older, original Clan Chattan.[12] Allen surnamed MacOrchtry the son of Uchtred is mentioned by tradition as the chief of Camerons during the reign of King Robert II of Scotland and, according to the same source, the Camerons and Clan Chattan were two rival, hostile tribes.[9][10]

4.Sometime around the beginning of the 15th century (or possibly earlier) the Camerons established themselves as a Highland clan in the western end of the Great Glen in Lochaber.[13] It is likely they did so through the marriage of a local heiress of the Mael-anfhaidh kindred (Clan Mael-anfaidh, which Moncreiffe translates as "children of He who was Dedicated to the Storm").[13] The Collins Scottish Clan Encyclopedia states that the heiress was from the MacMartin of Letterfinlay family.[11] By the 15th century, after the Mael-anfhaidh chiefship had passed into the Cameron family, the local families of MacMartin of Letterfinlay, MacGillonie of Strone and MacSorley of Glen Nevis were absorbed within the incoming Clan Cameron.[13] In consequence, the early chiefs of the Highland Camerons were sometimes styled "MacGillonay".[13] Studies of Manuscript 1467 have thrown closer light on the relationships between the Camerons, MacGillonies, MacMartins and others.[14][15][16] Since the 15th century though, Clan Cameron chiefs have been more commonly styled Mac Dhomnuill Dubh, in reference to the first Cameron chief whom succession can be traced.[13] Donald Dubh was the first "authentic" chief or captain of this confederation of tribes which gradually became known as the Clan Cameron,[11] taking the name of their captain as the generic name of the whole, until the clan was first officially recognized by that name in a charter of 1472.[8][9]

It was in the time of chief Alan Macdonald Dubh Cameron, 12th chief of Clan Cameron that a feud began with the Clan Mackintosh and Clan Chattan that continued sporadically for about 300 years.[11]

The first recorded battle was the Battle of Drumlui in 1337 in which a dispute arose between the Clan Mackintosh and Clan Cameron over land at Glenlui and Loch Arkaig.[17]

This was followed by the Battle of Invernahoven in 1370, also against the Mackintoshes and Clan Chattan.[9][18]

The Battle of the North Inch was fought in 1396 as a trial by combat, between thirty selected warriors on each side from the Clan Cameron and Chattan Confederation of Clan Mackintosh.[9][19] 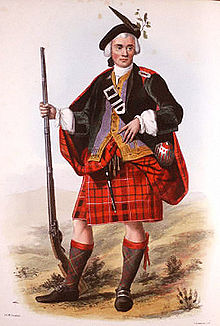 A Victorian era, romanticised depiction of a member of the clan by R. R. McIan, from The Clans of the Scottish Highlands, published in 1845.

In 1431 the Clan Cameron fought at the Battle of Inverlochy (1431) against the Clan Donald whose chief Alexander of Islay, Earl of Ross had been imprisoned by the king. The MacDonalds were then led by Alexander's nephew, Donald Balloch MacDonald who defeated the royalist army led by the Earl of Mar.[9][23] In 1439 the Clan Cameron fought against the Clan Maclean at the Battle of Corpach.[9][24]

In 1441 another battle with the Mackintoshes, the Battle of Craig Cailloc, was fought.[9][22] In 1472 Alan MacDonald Dubh, 12th Chief of the Clan Cameron was made constable of Strome Castle on behalf of the Clan MacDonald of Lochalsh. He was later killed in battle in 1480 fighting the Mackintoshes and MacDonalds of Keppoch.[9] In 1491 the Clan Cameron took part in the Raid on Ross.[9][25]

In 1505, during Dubh's Rebellion, the Battle of Achnashellach is said to have taken place between the Camerons against the Clan Munro and the Clan Mackay.[9][26] During the Anglo-Scottish Wars the Clan Cameron chief, Ewen Cameron and a portion of his men survived fighting against the English army at the Battle of Flodden in 1513.[9][27]

In 1544, a feud took place over the disputed chiefship of the Clan MacDonald of Clan Ranald and this resulted in the Battle of the Shirts where the Camerons provided archers in support of the MacDonalds against the Clan Fraser of Lovat who were defeated. Legend has it that only five Frasers and eight MacDonalds survived. The Camerons subsequently carried out successful raids upon the Clan Grant and Clan Fraser lands, which were incredibly rich and fertile to the Lochaber men. Owing to his role in this conflict Ewen Cameron fell into disfavour with the Earl of Huntly, Chief of Clan Gordon and Lieutenant of the North. Chief Ewen Cameron would be executed as a result of this battle and other actions at Elgin in 1547.[9][28]

The Battle of Bun Garbhain was fought in 1570 when Donald Dubh Cameron, XV Chief of Clan Cameron, had died, leaving an infant son, Allan, at the head of the clan. During the battle the Chief of MacKintosh is believed to have been killed by Donald 'Taillear Dubh na Tuaighe' Cameron, (son of the XIV Chief of Clan Cameron), with a fearsome Lochaber axe.[9][29]

During the Civil War at the Battle of Inverlochy 1645, Clan Cameron fought on the side of the Royalist Scots and Irish who defeated the Scottish Covenanters of Clan Campbell.[9] The clan continued to oppose Oliver Cromwell, and played a leading role in Glencairn's rising of 1651 to 1654.[9]

The Stand-off at the Fords of Arkaig 1665 – a standoff without bloodshed that saw the Camerons finally end their 328-year feud with the Chattan Confederation, led by the Clan Mackintosh.[31]

In 1668, Sir Ewen Cameron, XVII Chief of Clan Cameron was responsible for keeping the peace between his men and Clan Mackintosh. However, when he was away in London a feud broke out between Clan MacDonald and the Mackintoshes. As Sir Ewen was away he was not able to hold back his clan, and they made a minor contribution to the MacDonald victory over the Mackintoshes and Mackenzies at the Battle of Mulroy, east of Spean Bridge.[9][32]

During the Jacobite rising of 1715 the Clan Cameron supported the Jacobite cause fighting at the Battle of Sheriffmuir.[36] They later fought at the Battle of Glen Shiel in 1719, after which the 18th Chief John Cameron of Lochiel, after hiding for a time in the Scottish Highlands, made his way back to exile in France.[9] General Wade's report on the Highlands in 1724, estimated the clan strength at 800 men.[37]

When Charles Edward Stuart landed in Scotland in August 1745 he was met by the Lochiel, 19th Clan Chief, who pledged his Clan's full support.[11] The Jacobite rising of 1745 might never had happened if Lochiel had not come out with his clan.[11] The Clan Cameron fought as Jacobites at the Battle of Prestonpans (1745), Battle of Falkirk (1746), and on the frontline at the Battle of Culloden (16 April 1746). After the Battle of Culloden, Donald Cameron of Lochiel, also known as Gentle Lochiel, took refuge in France, where he died in October 1748.[9]

The MacMartins, a sept of Clan Cameron, are said to have been amongst the most loyal and valuable followers of Lochiel. In the 1745 Jacobite rising, the MacMartins were "out with" Lochiel's regiment.[38]

A Cameron clansman, John Du Cameron who was known as Sergeant Mor, who had fought as a Jacobite and then continued to steal cattle and blackmail people, was eventually captured in 1753 and executed.[39] Archibald Cameron of Lochiel who was the chief's brother and a leading Jacobite was also captured and executed in 1753.[40]

After Culloden Clan Cameron's land was forfeited and reverted to the government. In 1784 it was returned to Donald Cameron 22nd of Lochiel, grandson of the "Gentle Lochiel", who was only 15 at the time.[41] The land was managed by a trust until 1819, when Donald Cameron succeeded to his inheritance. The first clearance took place in 1801 at Clunes. Major emigrations, notably to Canada, began in 1802. The clearances continued under the name of Donald Cameron 22nd of Lochiel when he took over from the Trust in 1819.[42]

The Clan Cameron Museum at Achnacarry has a display of Cameron history including an account of the Cameron clearances.[43] The library also has copies of the books referenced in this section.

Some traditional Cameron land, on the eastern side of Loch Lochy, was not returned in 1784. In 1770 control had passed to the Duke of Gordon who proceeded to raise rents and clear the land with the aid of his Factor, the Revd John Anderson. The Duke's clearances from the Lochaber Estate through his reverend factotum went on until 1806.[44]

Many Camerons around the world trace their origins to people removed from their lands during the Highland Clearances.[45]

During the Revolutionary War and Napoleonic Wars John Cameron of Fassiefern fought with distinction in widespread theatres from 1793 onwards, before being killed at the head of the 92nd Regiment at Quatre Bras, two days before Waterloo. Donald Cameron the XXIII Chief fought with distinction at the Battle of Waterloo with the Grenadier Guards. He retired in 1832. Later that same year he married Lady Vere, daughter of Hon George Vere Hobart and sister of the 6th Earl of Buckinghamshire. Lady Vere Hobart was descended from the Camerons of Glenderrary.[9]

During World War I the XXV Chief of Clan Cameron raised four additional battalions of the Cameron Highlanders and in 1934 he was appointed a Knight of the Thistle.[9]

Notably, the Cameron Highlanders were the last battalions that wore the kilt in battle, due to the purposeful delaying of orders by commanding officers in the battalions (no one wanted to give up the kilt) and a surprise attack by the Germans (successfully repelled). For this they earned the nickname of 'Ladies from Hell'.[9]

Sir Donald Cameron 26th of Lochiel, who served with the regiment later becoming Honorary Colonel, was appointed KT in 1973.