For other uses, see Cleethorpes (disambiguation).

Cleethorpes (/ˌkliːθɒrps/) is a seaside town on the estuary of the Humber in North East Lincolnshire, England[2] with a population of nearly 40,000 in 2011. It has been permanently occupied since the 6th century, with fishing as its original industry, then developing into a resort in the 19th century. 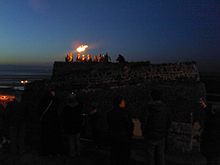 The town lies on the Greenwich meridian and its average annual rainfall is amongst the lowest in the British Isles.

Cleethorpes beach is frequently named as one of the most ‘Instagrammable’. In 2021 The Trainline named the beach second best in the UK.[3]

The name Cleethorpes is thought to come from joining the words clee, an old word for clay, and thorpes, an Old English/Old Norse word for villages, and is of comparatively modern origin.[4] Before becoming a unified town, Cleethorpes was made up of three small villages, or "thorpes": Itterby, Oole and Thrunscoe, which were part of a wider parish called Clee (centred on Old Clee).

Whilst there are Neolithic and Bronze Age remains in the area, permanent occupation appears to date from the 6th century, with substantial communities appearing only in the 9th century when the Danes arrived. [5]

The manor of Itterby was purchased in 1616 by the trustees of Peter Blundell's charity for the benefit of scholars and fellows at Sidney Sussex College, Cambridge from Blundell's School, Tiverton.[6] This is reflected in many of the street and park names in the area.

Cleethorpes developed as a fishing village. By the time of the 1801 census the population was 284.[7] The 1820s saw the first developments of Cleethorpes as a health holiday resort, with sea-bathing and the taking of medicinal waters becoming fashionable. By 1831 the population had increased to 497.[7]

In 1842 the Cleethorpes Enclosure Bill was enacted. 2,100 acres (8.5 km2) of land were divided among land owners and eight new roads developed.[8] In 1848 Cleethorpes was described as
"...much resorted to as a bathing-place, for which it is highly eligible; the air is pure, the scenery good and besides a few lodging-houses and smaller inns, there is a large hotel, built some years since, on an eminence embracing extensive views of the sea, the Humber, and the Yorkshire coast. Many of the population are employed in the oyster-fisheries."[9]

The resort expanded following the linking of the town by railway with industrial towns in Yorkshire. Cleethorpes Pier opened in 1873 and the promenade in 1885.[8] Cleethorpes with Thrunscoe was created as a Local Board of Health District in 1873, and under the Local Government Act of 1894 it became an urban district.[10] Its headquarters was established at Cleethorpes Town Hall in 1905.[11]

In 1916 the urban district was renamed Cleethorpes, and in 1922 and 1927 the town's boundaries were extended to include part of Humberston (as far as North Sea Lane) and the Beacon Hill area of Weelsby parish. In 1936 Cleethorpes was granted a charter of incorporation to become a municipal borough.[10]

Cleethorpes successfully resisted attempts by Grimsby to absorb it and in 1974 it became the Borough of Cleethorpes within the new county of Humberside. However, when Humberside County Council was abolished in 1996, Cleethorpes Borough Council was joined with Grimsby Borough Council as the unitary authority of North East Lincolnshire. In 2009 North East Lincolnshire Council agreed to market the towns of Grimsby, Immingham and Cleethorpes, under the 'Greater Grimsby' banner.[12]

Local residents from Lincolnshire and the Humber area affectionately refer to Cleethorpes as Meggies; the two largest resorts on the Lincolnshire coast are known by their nicknames 'Meggies' (Cleethorpes) and 'Skeggy' (Skegness). Cleethorpes can also be known as "down beach".[13]

The Winter Gardens, a venue for a variety of events, was also demolished in 2007.[14] In 2007 a North East Lincolnshire Council's committee accepted proposals for the demolished Cleethorpes Winter Gardens to be replaced by 47 flats. The old mini steam railway running from the seafront Leisure centre to St Anthony's bank has been extended and significantly improved whilst a cafe and gallery has been added to the boating lake, many ducks and geese use the boating lake to breed making it a pleasant place to visit. A large open air show ground has been built close to the eastern end of the boating lake often showing live bands and hosting special events, most notably hosting the London 2012 Olympic torch relay.

Cleethorpes is twinned with Königswinter, Germany.

Cleethorpes is physically linked to the neighbouring town of Grimsby by built up residential estates and the villages of Old Clee and Weelsby are also contiguous with the two towns.

From Cleethorpes railway station, operated by TransPennine Express, train services run, via Grimsby, to Barton-upon-Humber (for bus link to Hull), Manchester Airport (South TransPennine) and Newark-on-Trent. Trains to London are available by travelling to Doncaster then switching to services to London Kings Cross. The railway station is also served by Northern and East Midlands Railway.

From September 2011, N.E. Lincolnshire SSP was the only remaining School Sports Partnership after government funding cuts.

The parish church is St Peter's, built in 1866. Other churches are St Francis of Assisi on Sandringham Road, and Holy Trinity and St Mary's Church in Old Clee, the oldest building (built 950 AD) in Grimsby. Christ Church of Cleethorpes, near Machray Place, is also one of the larger parishes.[further explanation needed]

Cleethorpes is home to Blundell Park, the home ground of the football team, Grimsby Town, one of few English League clubs with a town or city name to have their home ground in a different community.[16] There is an athletics club[17] and Cleethorpes Rugby Union Football Club who play in the Midlands 4 East (NE).[18]

Leisure/other sports The old Cleethorpes bathing pool was demolished and replaced in the eighties with a modern leisure centre. Facilities include a large indoor wave pool, badminton and squash courts, a gym and sports hall. The local badminton club meets here.

A greyhound racing track was opened around the outside of the stock car racing track in 1981 (which was on the site of the former Cleethorpes Marineland & Zoo which closed in 1977). The racing was independent (not affiliated to the sports governing body the National Greyhound Racing Club NGRC) and was known as a flapping track, which was the nickname given to independent tracks.[20][21] In 1983 there were plans to build new kennels and join the NGRC [22] but racing only lasted until midway through 1986.[23] The stock cars closed in the mid-1990s.

Cleethorpes is currently part of the parliamentary constituency of the same name, which also includes other towns in the area, including Immingham and Barton-upon-Humber. Prior to 1997, Cleethorpes had been included in the constituencies of Brigg and Cleethorpes, Louth (Lincolnshire) and Grimsby.

Since 1945, the members of parliament for Cleethorpes have been as follows:

Since 1996 Cleethorpes has formed an unparished area in the unitary borough of North East Lincolnshire. Cleethorpes comprises three of the borough's sixteen wards: Croft Baker, Haverstoe and Sidney Sussex. Each ward returns three councillors, so Cleethorpes is represented by 9 of 42 members of the council. Cleethorpes does not have its own town council; however, the nine councillors form the Charter Trustees of the Town of Cleethorpes.[24]

North East Lincolnshire Council has three Council Wards within the area of Cleethorpes. As of 3 May 2018, the councillors are:

Panorama of the Cleethorpes seafront 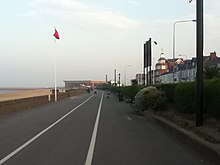 While commonly referred to as a seaside resort, Cleethorpes actually sits on the Humber Estuary. The sea at Cleethorpes is actually the mouth of the Humber. This means that bathers are separated from the sea by several hundred metres of sand at low tide.

The sea front provides views of shipping traffic entering and leaving the Humber for the ports of Grimsby, Immingham, Hull and Goole.[citation needed]

Two large fortifications, the Humber Forts, are visible in the mouth of the river. On a clear day, the lighthouse situated on Spurn Point can be seen with the naked eye from the North Beach.

There is a Royal National Lifeboat Institution station, which is near the pier and next to the Coastguard on Central Promenade. Plans for a new and larger RNLI station were published in 2014.[25] Cleethorpes Rescue also protect the beach.[26]

Cleethorpes has a large boating lake with many varieties of ducks, swans and geese. There is also a 62.01 hectare local nature reserve: Cleethorpes Country Park, situated between the resort and the village of Humberston. To the south of Cleethorpes, near Humberston, is a yacht club.

The Cleethorpes Leisure Centre was opened in 1983 to replace the open bathing pool that was wrecked by storms on 11 January 1978. The leisure centre contains a 33-metre pool, 1.8 metres deep, as well as a water slide and a wave machine. The building also contains a gym and a sports hall. In 2012, major work was carried out to the roof of the building due to water damage.

Ross Castle, a mock ruin of a castle built in 1885 by the Manchester, Sheffield and Lincolnshire Railway, was named after Edward Ross, secretary of the railway company. Its height was the highest point on the cliffs. After a period of closure, the castle was renovated, re-opening in June 2008 to the public. Possibilities of a further closure have been raised after a woman fell to her death on 9 January 2009.[27] In 2007 the town was the Royal Horticultural Societies Britain in Bloom award winner in the coastal category. The town was also received a Silver-Gilt award, a Tourism Award and Jeff Blanchard the Shredded Wheat Community Champions award.[citation needed] 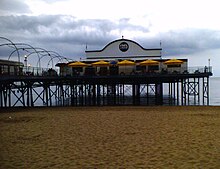 A statue of the Boy with the Leaking Boot was given to the town in 1918 by John Carlborn. It is reported that he was a Swedish immigrant to Cleethorpes who had built up a successful shipping business, and that the statue was a copy of one in the Hasselbacken Restaurant in Stockholm, Sweden.[28] The Cleethorpes statue now stands in a pond in the Diana Princess of Wales Memorial Gardens, on Kingsway. It was stolen and replaced in 2002 and 2008, and vandalised in October 2011. In July 2012, two youths were recorded on CCTV as they frolicked naked in the pond and destroyed the fountain.[29] A replacement statue was made by a local garden ornaments manufacturer and installed with improved security in September 2012.[30] A nearby pub was named The Leaking Boot, but was destroyed by fire in June 2009.[31] 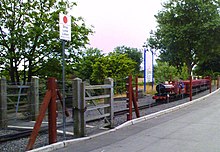 There was a roll of honour at Matthew Humberston Foundation School commemorating the deaths of 42 past pupils of the school who died in World War I, but after the closure of the school in 2010, it was put into storage at the North East Lincolnshire Council offices. As of November 2019[update]

the roll of honour was still being stored by the council, "with a view to being put on public display in a new town centre museum and heritage centre".[33]

On 22 September 1956 at 3pm a UFO was spotted for more than an hour off the Cleethorpes coast; it was seen by radar at RAF Manby too. It was a large spherical object with a glass appearance.[34] The Lakenheath-Bentwaters incident had happened the month before.