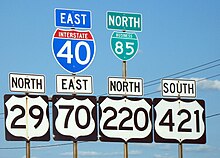 Concurrent numbering can become very common in jurisdictions that allow it. Where multiple routes must pass between a single mountain crossing or over a bridge, or through a major city, it is often economically and practically advantageous for them all to be accommodated on a single physical roadway. In some jurisdictions, however, concurrent numbering is avoided by posting only one route number on highway signs; these routes disappear at the start of the concurrency and reappear when it ends. However, any route that becomes unsigned in the middle of the concurrency will still be signed on most maps and road atlases.

Most concurrencies are simply a combination of at least two route numbers on the same physical roadway. This is often practically advantageous as well as economically advantageous; it may be better for two route numbers to be combined into one along rivers or through mountain valleys. Some countries allow for concurrencies to occur, however, others specifically do not allow it to happen. In those nations which do permit concurrencies, it can become very common. In these countries, there are a variety of concurrences which can occur. 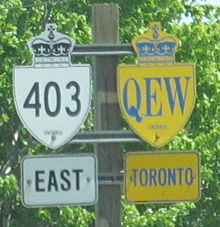 The QEW concurrent with Highway 403 in Ontario

In the United States, concurrencies are simply marked by placing signs for both routes on the same or adjacent posts. The federal Manual on Uniform Traffic Control Devices prescribes that when mounting these adjacent signs together that the numbers will be arranged vertically or horizontally in order of precedence. The order to be used is Interstate Highways, U.S. Highways, state highways, and finally county roads, and within each class by increasing numerical value.[12]

Several states do not officially have any concurrencies, instead officially ending routes on each side of one.[a] There are several circumstances where unusual concurrencies exist along state borders. One example occurs along the Oklahoma–Arkansas state line. At the northern end of this border Oklahoma State Highway 20 runs concurrently with Arkansas Highway 43 and the two highways run north–south along the boundary.[14]

Concurrencies are also found in Canada. British Columbia Highway 5 continues east for 12 kilometres (7.5 mi) concurrently with Highway 1 and Highway 97, through Kamloops. This stretch of road, which carries Highway 97 south and Highway 5 north on the same roadway (and vice versa), is the only wrong-way concurrency in British Columbia. Concurrencies are also very common in Quebec. Most notably, the Samuel-de-Champlain Bridge features a concurrency with three Autoroutes: A-10, A-15, and A-20. Another example is A-55, which runs concurrently with A-10, A-20, and A-40, all of which are major highways.

In Ontario, the Queen Elizabeth Way and Highway 403 run concurrently between Burlington and Oakville, forming the province's only concurrency between two 400-series highways.[15] The concurrency was not in the original plan which intended for both the QEW and Highway 403 to run parallel to each other, as the Hamilton–Brantford and Mississauga sections of Highway 403 were initially planned to be linked up along a corridor (later planned to be tolled) now occupied by Highway 407. To avoid forcing drivers to pay tolls to use a section of a continuous Highway 403, the new link was designated as a western extension of the tolled Highway 407, with the Mississauga section of Highway 403 planned to be renumbered as Highway 410. The renumbering to 410 never came to pass,[16] and consequently Highway 403 was signed concurrently along the Queen Elizabeth Way in 2002, remedying the discontinuity. Nonetheless, many surface street signs referring to that section of freeway with the QEW/Highway 403 concurrency still only use the highway's original designation of QEW, although the MTO has updated route markers on the QEW to reflect the concurrency.[17]

At the national level, the Trans-Canada Highway, which does not bear a uniform number in the eastern provinces, follows various provincial highways. In the Atlantic Provinces the main designated TCH route either follows a single numbered route across each province (an exception being the switching of the designation between Nova Scotia Highways 104 and 105), or has branches that are signed exclusively as TCH routes. In Ontario and Quebec, The TCH follows a series of provincial highways, and also has branches that follow sections of others that have concurrencies with it, signed with TCH shields alongside the provincial number. 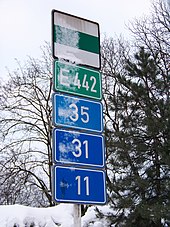 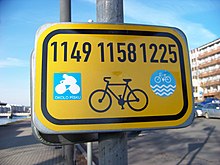 In the United Kingdom, routes do not run concurrently with others. Where this would normally occur, the roadway takes the number of only one of the routes (usually, but not always, the most important route), while the other routes are considered to have a gap and are signed in brackets (the equivalent of "to" signs in North America). An example is the meeting of the M60 and the M62 northwest of Manchester: the motorways coincide for the seven miles (11 km) between junctions 12 and 18 but the motorway between those points is only designated as the M60. European route numbers as designated by UNECE may have concurrencies (for instance E15 and E30 around Greater London), but since the E-route numbers are unsigned and unused in the UK, the existence of these concurrencies is purely theoretical.

In the Czech Republic, the European route numbers are only additional, and they are always concurrent with the state route numbering, usually highways or first-class roads. In the state numbering system, concurrences exist only in first-class and second-class roads; third class roads do not have them. The local term for such concurrences is peáž (from the French word péage). In the road register, one of the roads is considered the main ("source") road and the others as the péaging (guest) roads. The official road map enables a maximum of five concurrent routes of the intrastate numbering system.[19] Cycling routes and hiking routes are often concurrent. 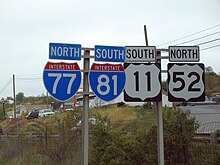 This westbound highway in southwestern Virginia simultaneously carries I-77 and I-81 in opposite directions. The wrong-way concurrency is also reflected in US 52 and US 11, which are concurrent with I-77 and I-81, respectively. 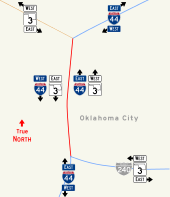 Since highways in the United States and Canada are usually signed with assigned cardinal directions based on their primary orientation, it is possible for a stretch of roadway shared between two highways to be signed with conflicting, even opposite, cardinal directions in a wrong-way concurrency. For example, near Wytheville, Virginia, there is a concurrency between I-77 (which runs primarily north–south, as it is signed) and Interstate 81 (which runs primarily northeast–southwest, but is also signed north–south). Because of the way they intersect, the section of Interstate where they overlap has the two roads signed for opposite directions, leading to the town's nickname of "Which-Way-Ville".[21] One might simultaneously be on I-77 northbound and I-81 southbound, while actually traveling due westbound.[22] An unusual example of a three-directional concurrency occurs southeast of Rhinelander, Wisconsin, where US 8 westbound (the actual compass direction) converges with southbound Wisconsin Highway 17 and northbound Wisconsin Highway 47.

Often when two routes with exit numbers overlap, one of the routes has its exit numbers dominate over the other and can sometimes result in having two exits of the same number, albeit far from each other along the same highway. An example of this is from the concurrency of I-94 and US 127 near Jackson, Michigan. The concurrent section of freeway has an exit with M-106, which is numbered exit 139 using I-94's mileage-based numbers. US 127 also has another exit 139 with the southern end of the US 127 business loop in Mount Pleasant, Michigan. (US 127's mile markers in Michigan reflect the cumulative distance north of the Ohio state line; the numbers resume north of the I-94 overlap and reflect the distance accumulated on that concurrency.)[23]

However, there are also instances where the dominant exit number range is far more than the secondary route's highest exit number, for example the concurrency of I-75 and I-85 in Atlanta, Georgia — where I-75 is dominant — the exit numbers range from 242 to 251, while I-85's highest independent mile marker in Georgia is 179.[24] 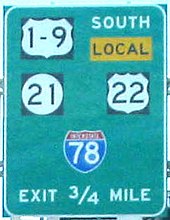 US 1/9 concurrency signed on one shield

Some brief concurrencies in the past have been eliminated by reassigning the designations along the roadways. This can involve scaling back the terminus of one designation to the end of a concurrent section. At the same time, there could be an extension of another highway designation that is used to replace the newly shortened designation with another one.

Between states, US 27 in Michigan previously ran concurrently with I-69 from the Michigan–Indiana state line to the Lansing, Michigan, area. From there it turned northwards to its terminus at Grayling. In 1999, the Michigan and Indiana departments of transportation petitioned the American Association of State Highway and Transportation Officials for permission to truncate US 27 at Fort Wayne, Indiana.[25] In 2002, Michigan removed the US 27 designation from I-69 and extended the US 127 designation from Lansing to Grayling.[26] MDOT's stated reason for the modification was to "reduce confusion along the US 27/US 127 corridor".[27] After US 27's signage was removed, the highway north of the Lansing area was renumbered US 127, and the US 27 designation was removed from I-69.[27]

Some consolidation schemes involve the use of incorporating two single-digit numbers onto one marker, as along the US 1/9 concurrency in northern New Jersey.[28] In the mid-20th century, California had numerous concurrencies, but the California Legislature removed most of them in a comprehensive reform of highway numbering in 1964.[29]