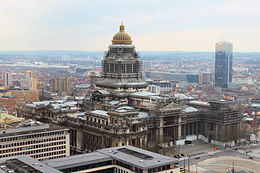 The court of appeal of Brussels has its seat in the city's Palace of Justice. 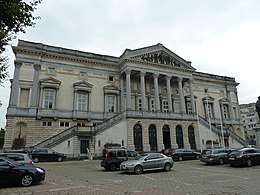 Court building where the court of appeal of Ghent is seated.

Adrien baron de la Kéthulle de Ryhove, first president of the court of appeal of Ghent from 1919 to 1923. 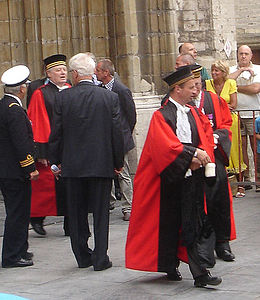 Unlike the tribunals of first instance, the courts of appeal are not divided into different sections (except for the Market Court, see further below), but they consist of a number of chambers based on the matters they hear nonetheless. There are chambers for civil and enterprise matters, chambers for criminal matters and chambers for family and juvenile matters. A special chamber is the chamber of indictment (Dutch: kamer van inbeschuldigingstelling, French: chambre des mises en accusation, German: Anklagekammer), which hears appeals in judicial investigations and decides on certain indictments (see further below).[1][2][4]

A judge in the court of appeal is called a counsellor (Dutch: raadsheer, French: conseiller, German: Gerichtsrat). They are professional, law-trained magistrates who are, like all judges in Belgium, appointed for life until their retirement age. Lawyers or notaries can act as locum tenens counsellor. Appellate cases are heard by the different chambers of the courts of appeal, which are either chaired by a single counsellor or by a panel of three counsellors (depending on the nature and complexity of the case), assisted by a clerk. Both claimants and defendants in a case can be assisted or represented by counsel, but this is not required. The counsellor chairing the chamber (or panel) is referred to as the 'president of the chamber' or 'chairman of the chamber' (Dutch: kamervoorzitter, French: président de chambre, German: Kammerpräsident). The counsellor who holds the overall leadership position of the court of appeal is referred to as the 'first president' or 'first chairman' (Dutch: eerste voorzitter, French: premier président, German: erster Präsident). A judgement made by a court of appeal is literally called an 'arrest' (Dutch: arrest, French: arrêt, German: Entscheid) in order to distinguish it from the judgements of lower tribunals; it might also be translated into English as a 'decision' or 'ruling'. For the sake of readability, the term 'judgement' will be used in this article.[1][2][4]

The courts of appeal also have appellate jurisdiction over some specific cases, such as decisions on the inclusion or exclusion of voters on electoral rolls made by the college of mayor and aldermen of a municipality, decisions made by Belgian consuls outside of the Belgian territory, and judgements of the Belgian Prize Court. Over the latter two, only the court of appeal of Brussels has appellate jurisdiction.[1][5][7][8]

The council chamber (Dutch: raadkamer, French: chambre du conseil, German: Ratskammer) of a tribunal of first instance oversees the judicial investigations conducted by an investigative judge. In this role, the council chamber decides on the necessity of pre-trial detention, on whether sufficient indications of guilt exist for criminal charges at the end of a judicial investigation, or on extra investigative measures to be executed by the investigative judge, amongst other things. The prosecution, a (suspected) offender being charged, as well as any civil party to the case, can appeal any such decision of the council chamber at the chamber of indictment of the court of appeal, which is always chaired by a panel of three counsellors. The decision then made by the chamber of indictment is final (except for an appeal in cassation).[1][2]

Indictments for court of assizes

The council chamber can not decide on all types of criminal charges however. It only decides on charges of delicts (Dutch: wanbedrijf, French: délit, German: Vergehen), which is the intermediate category of crimes more serious than contraventions but less serious than crimes under Belgian law (comparable to misdemeanors or lesser felonies), as well as on charges of crimes (Dutch: misdaad, French: crime, German: Verbrechen), the most serious category of crimes under Belgian law (comparable to major felonies) under some conditions. The council chamber can only decide on crimes when these are correctionalised. The process of correctionalisation requires the prosecutor to assume the existence of extenuating circumstances, and results in the crime being tried by the correctional section of a tribunal of first instance instead of a court of assizes. When a crime is not correctionalised and thus is to be tried by a court of assizes, the council chamber must send the case to the chamber of indictment, which will decide on the charges and deliver an indictment (Dutch: inbeschuldigingstelling, French: mise en accusation, German: Versetzung in den Anklagezustand) if sufficient indications of guilt exist. Only the chamber of indictment can deliver an indictment for a trial by a court of assizes.[1][2][9]

Since January 2017, the court of appeal of Brussels has a special section referred to as the Market Court (Dutch: Marktenhof, French: Cour des Marchés, German: Märktegerichtshof), which has exclusive jurisdiction over appeals against decisions made by regulators and administrative authorities regarding certain regulated markets. These cases are removed by law from the administrative jurisdiction of the Council of State, which generally has supreme jurisdiction over any administrative dispute. The Market Court hears cases in Dutch and French, and is chaired by a panel of three counsellors who are experienced in economic or financial law. More specifically, the Market Court hears appeals against certain decisions made by regulators regarding competition law, public takeover bids, counterfeit money, financial markets, energy markets, railway services, telecommunication services, postal services and data protection. The judgements made by the Market Court are final; no further appeal is possible against them (except for an appeal in cassation).[1][10]

The courts of appeal also have jurisdiction over certain procedures of a more administrative nature that are not strictly related to the administration of justice. These include:[1][5]

In accordance with the Belgian Code of Criminal Procedure, the courts of appeal have original jurisdiction over certain judicial and executive officers suspected of having committed a delict or (correctionalised) crime, whether in or outside of the exercise of their office. This provision is referred to as privilege of jurisdiction (Dutch: voorrecht van rechtsmacht, French: privilège de juridiction, German: Gerichtsbarkeitsvorrecht). The judicial and executive officers to which privilege of jurisdiction applies, include all judges and counsellors in the courts and tribunals, all members of the public prosecutor's offices attached to the courts and tribunals, the members of the Court of Audit, the Constitutional Court, the Council of State and the Council for Alien Law Litigation, and the governors of the provinces of Belgium. In these exceptional criminal cases, the (suspected) offenders are tried directly by the court of appeal instead of the correctional section of the tribunal of first instance. The court of appeal will then judge the suspects in first and last instance; no further appeal is possible in these cases (except for an appeal in cassation). Whenever a counsellor in a court of appeal or member of its prosecutor-general's office is suspected of such a crime however, the Court of Cassation will transfer the case to a court or tribunal outside of the jurisdiction of the court of appeal involved. For non-correctionalised crimes, the court of appeal or Court of Cassation can only deliver an indictment for a trial by a court of assizes; it does not judge these cases itself. It should also be noted that a criminal action brought against a judge, counsellor or member of a prosecutor's office is distinct from any disciplinary procedure regarding their judicial office, and that a criminal sentence does not necessarily lead to a removal from office.[11]

Lastly, members of any of the federal or regional legislative assemblies enjoy some immunity from prosecution as well. During the session of their legislative assembly, they too can only be prosecuted with the permission of said assembly, in order to protect the separation of powers. Whilst they are otherwise subject to the same rules of criminal jurisdiction as any ordinary person, article 59 of the Belgian Constitution establishes that coercive or intrusive investigatory measures (such as house searches) against a member of a federal or regional legislative assembly can only be ordered by the first president of a court of appeal, who needs to inform the president of the assembly involved of any such measure taken.[14] 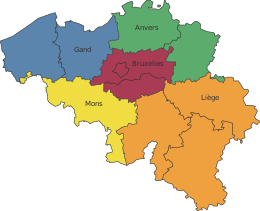 Map of the five judicial areas of Belgium (French names)

Judicial area of the court of appeal of Antwerp:

Judicial area of the court of appeal of Brussels:

Judicial area of the court of appeal of Ghent:

Judicial area of the court of appeal of Liège:

Judicial area of the court of appeal of Mons: