A covalent bond is a chemical bond that involves the sharing of electron pairs between atoms. These electron pairs are known as shared pairs or bonding pairs, and the stable balance of attractive and repulsive forces between atoms, when they share electrons, is known as covalent bonding.[1] For many molecules, the sharing of electrons allows each atom to attain the equivalent of a full valence shell, corresponding to a stable electronic configuration. In organic chemistry, covalent bonds are much more common than ionic bonds. 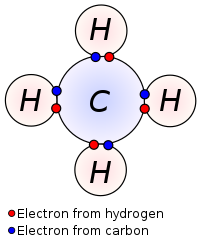 Early concepts in covalent bonding arose from this kind of image of the molecule of methane. Covalent bonding is implied in the Lewis structure by indicating electrons shared between atoms.

The term covalence in regard to bonding was first used in 1919 by Irving Langmuir in a Journal of the American Chemical Society article entitled "The Arrangement of Electrons in Atoms and Molecules". Langmuir wrote that "we shall denote by the term covalence the number of pairs of electrons that a given atom shares with its neighbors."[6]

The idea of covalent bonding can be traced several years before 1919 to Gilbert N. Lewis, who in 1916 described the sharing of electron pairs between atoms.[7] He introduced the Lewis notation or electron dot notation or Lewis dot structure, in which valence electrons (those in the outer shell) are represented as dots around the atomic symbols. Pairs of electrons located between atoms represent covalent bonds. Multiple pairs represent multiple bonds, such as double bonds and triple bonds. An alternative form of representation, not shown here, has bond-forming electron pairs represented as solid lines.[8]

Lewis proposed that an atom forms enough covalent bonds to form a full (or closed) outer electron shell. In the diagram of methane shown here, the carbon atom has a valence of four and is, therefore, surrounded by eight electrons (the octet rule), four from the carbon itself and four from the hydrogens bonded to it. Each hydrogen has a valence of one and is surrounded by two electrons (a duet rule) – its own one electron plus one from the carbon. The numbers of electrons correspond to full shells in the quantum theory of the atom; the outer shell of a carbon atom is the n = 2 shell, which can hold eight electrons, whereas the outer (and only) shell of a hydrogen atom is the n = 1 shell, which can hold only two.[9]

While the idea of shared electron pairs provides an effective qualitative picture of covalent bonding, quantum mechanics is needed to understand the nature of these bonds and predict the structures and properties of simple molecules. Walter Heitler and Fritz London are credited with the first successful quantum mechanical explanation of a chemical bond (molecular hydrogen) in 1927.[10] Their work was based on the valence bond model, which assumes that a chemical bond is formed when there is good overlap between the atomic orbitals of participating atoms.

Atomic orbitals (except for s orbitals) have specific directional properties leading to different types of covalent bonds. Sigma (σ) bonds are the strongest covalent bonds and are due to head-on overlapping of orbitals on two different atoms. A single bond is usually a σ bond. Pi (π) bonds are weaker and are due to lateral overlap between p (or d) orbitals. A double bond between two given atoms consists of one σ and one π bond, and a triple bond is one σ and two π bonds.[8] 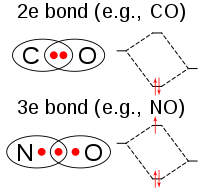 Bonds with one or three electrons can be found in radical species, which have an odd number of electrons. The simplest example of a 1-electron bond is found in the dihydrogen cation, H+
2. One-electron bonds often have about half the bond energy of a 2-electron bond, and are therefore called "half bonds". However, there are exceptions: in the case of dilithium, the bond is actually stronger for the 1-electron Li+
2 than for the 2-electron Li2. This exception can be explained in terms of hybridization and inner-shell effects.[12]

Molecules with odd-electron bonds are usually highly reactive. These types of bond are only stable between atoms with similar electronegativities.[14]

There are situations whereby a single Lewis structure is insufficient to explain the electron configuration in a molecule, hence a superposition of structures is needed. The same two atoms in such molecules can be bonded differently in different structures (a single bond in one, a double bond in another, or even none at all), resulting in a non-integer bond order. The nitrate ion is one such example with three equivalent structures. The bond between the nitrogen and each oxygen is a double bond in one structure and a single bond in the other two, so that the average bond order for each N–O interaction is 2 + 1 + 1/3 = 4/3.[8]

In organic chemistry, when a molecule with a planar ring obeys Hückel's rule, where the number of π electrons fit the formula 4n + 2 (where n is an integer), it attains extra stability and symmetry. In benzene, the prototypical aromatic compound, there are 6 π bonding electrons (n = 1, 4n + 2 = 6). These occupy three delocalized π molecular orbitals (molecular orbital theory) or form conjugate π bonds in two resonance structures that linearly combine (valence bond theory), creating a regular hexagon exhibiting a greater stabilization than the hypothetical 1,3,5-cyclohexatriene.[9]

In the case of heterocyclic aromatics and substituted benzenes, the electronegativity differences between different parts of the ring may dominate the chemical behavior of aromatic ring bonds, which otherwise are equivalent.[9]

Certain molecules such as xenon difluoride and sulfur hexafluoride have higher co-ordination numbers than would be possible due to strictly covalent bonding according to the octet rule. This is explained by the three-center four-electron bond ("3c–4e") model which interprets the molecular wavefunction in terms of non-bonding highest occupied molecular orbitals in molecular orbital theory and resonance of sigma bonds in valence bond theory.[15]

In three-center two-electron bonds ("3c–2e") three atoms share two electrons in bonding. This type of bonding occurs in boron hydrides such as diborane (B2H6), which are often described as electron deficient because there are not enough valence electrons to form localized (2-centre 2-electron) bonds joining all the atoms. However the more modern description using 3c–2e bonds does provide enough bonding orbitals to connect all the atoms, so that the molecules can instead be classified as electron-precise.

Each such bond (2 per molecule in diborane) contains a pair of electrons which connect the boron atoms to each other in a banana shape, with a proton (the nucleus of a hydrogen atom) in the middle of the bond, sharing electrons with both boron atoms. In certain cluster compounds, so-called four-center two-electron bonds also have been postulated.[16]

After the development of quantum mechanics, two basic theories were proposed to provide a quantum description of chemical bonding: valence bond (VB) theory and molecular orbital (MO) theory. A more recent quantum description[17] is given in terms of atomic contributions to the electronic density of states.

Comparison of VB and MO theories

The two theories represent two ways to build up the electron configuration of the molecule.[18] For valence bond theory, the atomic hybrid orbitals are filled with electrons first to produce a fully bonded valence configuration, followed by performing a linear combination of contributing structures (resonance) if there are several of them. In contrast, for molecular orbital theory a linear combination of atomic orbitals is performed first, followed by filling of the resulting molecular orbitals with electrons.[8]

Modern calculations in quantum chemistry usually start from (but ultimately go far beyond) a molecular orbital rather than a valence bond approach, not because of any intrinsic superiority in the former but rather because the MO approach is more readily adapted to numerical computations. Molecular orbitals are orthogonal, which significantly increases the feasibility and speed of computer calculations compared to nonorthogonal valence bond orbitals. However, better valence bond programs are now available.[citation needed]

Covalency from atomic contribution to the electronic density of states

In COOP,[19] COHP[20] and BCOOP,[21] evaluation of bond covalency is dependent on the basis set. To overcome this issue, an alternative formulation of the bond covalency can be provided in this way.

The center mass cm(n,l,ml,ms) of an atomic orbital |n,l,ml,ms⟩, with quantum numbers n, l, ml, ms, for atom A is defined as

where gA
|n,l,ml,ms⟩(E) is the contribution of the atomic orbital |n,l,ml,ms⟩ of the atom A to the total electronic density of states g(E) of the solid

where the outer sum runs over all atoms A of the unit cell. The energy window [E0,E1] is chosen in such a way that it encompasses all of the relevant bands participating in the bond. If the range to select is unclear, it can be identified in practice by examining the molecular orbitals that describe the electron density along with the considered bond.

where the contributions of the magnetic and spin quantum numbers are summed. According to this definition, the relative position of the A levels with respect to the B levels is

where, for simplicity, we may omit the dependence from the principal quantum number n in the notation referring to CnAlA,nBlB.

In this formalism, the greater the value of CA,B, the higher the overlap of the selected atomic bands, and thus the electron density described by those orbitals gives a more covalent A–B bond. The quantity CA,B is denoted as the covalency of the A–B bond, which is specified in the same units of the energy E.