The Danish Football Union (Danish: Dansk Boldspil-Union; DBU) is the governing body of football in Denmark. It is the organization of the Danish football clubs and runs the professional Danish football leagues and the men's and women's national teams. It is based in the city of Brøndby and is a founding member of both FIFA and UEFA. The DBU has also been the governing body of futsal in Denmark since 2008.

The DBU was founded on 18 May 1889 and was the first national Football Association outside Great Britain and Ireland.[1] However, it did not register games officially before the 1908 Summer Olympics, meaning that the win in the 1906 Intercalated Olympics tournament was not officially recorded by the DBU. 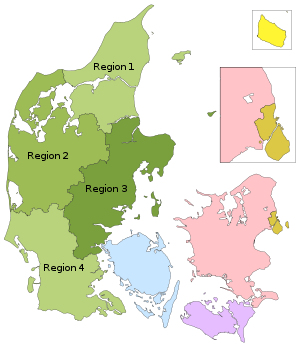 The DBU is separated into 6 regional associations, based on the former counties of Denmark:

The DBU awards the best national team players each year, with an award to the best senior team player, as well as the best player in three of the DBU's six national youth teams.

Player of the Year

Since 1963, the DBU has awarded the Danish Player of the Year in a vote amongst the Danish players. In the time of amateur football, only players in the domestic league could achieve the prize, and even after the emergence of paid football in 1978, no players in foreign clubs were eligible for the award. When the award was finally opened to all Danish players, domestic and abroad, in 1983, national team captain Morten Olsen was the first player to win the Player of the Year award taking all Danish players into consideration. The record number of award wins is four, by Brian Laudrup (1989, 1992, 1995, and 1997).

Young Players of the Year

The Young Players of the Year Awards on the other hand are sponsored by Arla Foods, the awards were initially known as Mælkens talentpriser (the milk's talent awards) in order to promote the line of dairy products of the company then known as "MD Foods". DBU found new sponsor DONG (later DONG Energy), an oil company, in 2004 but Arla went on to sponsor the prize which was renamed Arla's talentpriser (Arla's talent awards) in 2005.[1]

In 2017 the negotiations about terms and salary with the women's national team broke down causing DBU to cancel the world cup qualification match against Sweden. The team lost the match 3-0 due to forfeit. DBU was handed a fine by the UEFA disciplinary comity. The national team and DBU came to an agreement before the match was supposed to be played, but the match was already cancelled. The team then failed to qualify directly to the world cup. A playoff match will decide if the team will qualify to the world cup.

After the world cup 2018, the agreement between DBU and the men's national team expired. The negotiations about terms and salary is still ongoing. Currently DBU has selected a squad without any players from the top tier of international and national leagues. The team is to play two matches. DBU refuses to negotiate while before the end of the two matches.

The badge is still in use on the Danish men's kit for the European Championship 2020 (so named despite being played in 2021 due to the COVID-19 pandemic).