In the administrative divisions of France, the department (French: département, pronounced [depaʁtəmɑ̃]) is one of the three levels of government under the national level ("territorial collectivities"), between the administrative regions and the communes. Ninety-six departments are in metropolitan France, and five are overseas departments, which are also classified as overseas regions. Departments are further subdivided into 334 arrondissements, and these are divided into cantons. The last two levels of government have no autonomy; they are the basis of local organisation of police, fire departments and, sometimes, administration of elections.

Each department is administered by an elected body called a departmental council (conseil départemental [sing.], conseils départementaux [plur.]). From 1800 to April 2015, these were called general councils (conseil général [sing.] conseils généraux [plur.]).[1] Each council has a president. Their main areas of responsibility include the management of a number of social and welfare allowances, of junior high school (collège) buildings and technical staff, and local roads and school and rural buses, and a contribution to municipal infrastructures. Local services of the state administration are traditionally organised at departmental level, where the prefect represents the government; however, regions have gained importance since the 2000s, with some department-level services merged into region-level services.

The departments were created in 1790 as a rational replacement of Ancien Régime provinces with a view to strengthen national unity; the title "department" is used to mean a part of a larger whole. Almost all of them were named after physical geographical features (rivers, mountains, or coasts), rather than after historical or cultural territories, which could have their own loyalties. The division of France into departments was a project particularly identified with the French revolutionary leader the Abbé Sieyès, although it had already been frequently discussed and written about by many politicians and thinkers. The earliest known suggestion of it is from 1764 in the writings of d'Argenson.[citation needed] They have inspired similar divisions in many countries, some of them former French colonies.

Most French departments are assigned a two-digit number, the "Official Geographical Code", allocated by the Institut national de la statistique et des études économiques (Insée). Overseas departments have a three-digit number. The number is used, for example, in the postal code, and was until recently used for all vehicle registration plates. Residents commonly use the numbers to refer to their own department or a neighbouring one, for example, inhabitants of Loiret may refer to their department as "the 45". More distant departments are generally referred to by their names, as few people know the numbers of all the departments.

In 2014, President François Hollande proposed to abolish departmental councils by 2020, which would have maintained the departments as administrative divisions, and to transfer their powers to other levels of governance. This reform project has since been abandoned. 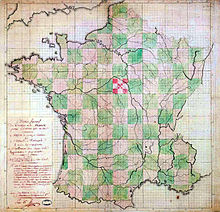 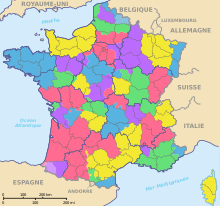 The first French territorial departments were proposed in 1665 by Marc-René d'Argenson to serve as administrative areas purely for the Ponts et Chaussées (Bridges and Highways) infrastructure administration.[2]

Before the French Revolution, France gained territory gradually through the annexation of a mosaic of independent entities. By the close of the Ancien Régime, it was organised into provinces. During the period of the Revolution, these were dissolved, partly in order to weaken old loyalties. The National Constituent Assembly decided to create a more uniform division into departments (département) and districts in late 1789.[3] The process began on 4 August 1789 with the elimination of provincial privileges, and a 22 December 1789 decree (with letters patent in January 1790) provided for the termination of the provincial governments.[3]

The modern department system, as all-purpose units of the government, was decreed on 26 February 1790 (with letters patent on 4 March 1790) by the National Constituent Assembly.[3] Their boundaries served two purposes: 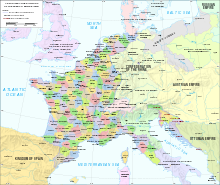 Departments at the maximum extent of the First French Empire (1812)

The old nomenclature was carefully avoided in naming the new departments. Most were named after an area's principal river or other physical features. Even Paris was in the department of Seine. Savoy, during its temporary occupation, became the department of Mont-Blanc.[4] The provinces continued to exist administratively until 21 September 1791.[3]

The number of departments, initially 83, had been increased to 130 by 1809 with the territorial gains of the Republic and of the First French Empire.[5] Following Napoleon's defeats in 1814–1815, the Congress of Vienna returned France to its pre-war size and the number of departments was reduced to 86 (three of the original departments having been split). In 1860, France acquired the County of Nice and Savoy, which led to the creation of three new departments. Two were added from the new Savoyard territory, while the department of Alpes-Maritimes was created from Nice and a portion of the Var department. The 89 departments were given numbers based on the alphabetical order of their names.

The department of Bas-Rhin and parts of Meurthe, Moselle, Vosges and Haut-Rhin were ceded to the German Empire in 1871, following France's defeat in the Franco-Prussian War. A small part of Haut-Rhin however remained French and became known as the Territoire de Belfort; the remaining parts of Meurthe and Moselle were merged into a new Meurthe-et-Moselle department. When France regained the ceded departments after World War I, the Territoire de Belfort was not re-integrated into Haut-Rhin. In 1922, it became France's 90th department. Likewise, the Lorraine departments were not changed back to their original boundaries, and a new Moselle department was created in the regained territory, with slightly different boundaries from the pre-war department of the same name.

The re-organisation of Île-de-France in 1968 and the division of Corsica in 1975 added six more departments, raising the total in Metropolitan France to 96. By 2011, when the overseas collectivity of Mayotte became a department, joining the earlier overseas departments of the Republic (all created in 1946) – French Guiana, Guadeloupe, Martinique and Réunion – the total number of departments in the French Republic had become 101. In 2015, the Urban Community of Lyon was split from Rhône to form the Métropole de Lyon, a sui generis entity, with the powers of both an intercommunality and those of a department on its territory, formally classified as a "territorial collectivity with particular status" (French: collectivité territoriale à statut particulier) and as such not belonging to any department. As of 2019, Corse-du-Sud and Haute-Corse are still administrative departments, although they no longer have the status of departmental "territorial collectivities": region and department functions have been managed by a "single territorial collectivity" since 2018.

Despite the intention to avoid the old nomenclature, often the names of pre-1790 provinces remained in use. For example, the name of Berry, though no longer having an official status, remains up to the present in widespread use in daily life. 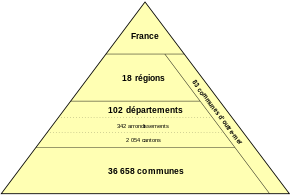 The departments are further divided into communes, governed by municipal councils. As of 2013, there were 36,681 communes in France. In the overseas territories, some communes play a role at departmental level. Paris, the country's capital city, is a commune as well as a department. 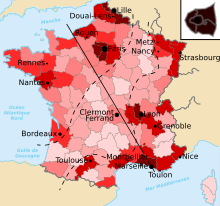 Population density in the departments (2007). The broken lines mark the approximate boundaries of the empty diagonal. The solid line is the Le Havre-Marseille line, to the east of which lives 60% of the French population.

The departments are numbered: their two-digit numbers appear in postal codes, in INSEE codes (including "social security numbers") and on vehicle number plates. Initially, the numbers corresponded to the alphabetical order of the names of the departments, but several changed their names, so the correspondence became less exact. Alphanumeric codes 2A and 2B were used for Corsica while it was split but it has since reverted to 20. The two-digit code "98" is used by Monaco. Together with the ISO 3166-1 alpha-2 country code FR, the numbers form the ISO 3166-2 country subdivision codes for the metropolitan departments. The overseas departments get three digits.

These maps cannot be used as a useful resource of voter preferences, because Departmental Councils are elected on a two-round system, which drastically limits the chances of fringe parties, if they are not supported on one of the two rounds by a moderate party. After the 1992 election, the left had a majority in only 21 of the 100 departments; after the 2011 election, the left dominated 61 of the 100 departments. (Mayotte only became a department after the election.)

Key to the parties:

The removal of one or more levels of local government has been discussed for some years; in particular, the option of removing the departmental level. Frédéric Lefebvre, spokesman for the UMP, said in December 2008 that the fusion of the departments with the regions was a matter to be dealt with soon. This was soon refuted by Édouard Balladur and Gérard Longuet, members of the committee for the reform of local authorities, known as the Balladur Committee.[6]

In January 2008, the Attali Commission recommended that the departmental level of government should be eliminated within ten years.[7]

Nevertheless, the Balladur Committee has not retained this proposition and does not advocate the disappearance of the departments, but simply "favors the voluntary grouping of departments", which it suggests also for the regions, with the aim of reducing the number of regions to 15.[8] This committee advocates, on the contrary, the suppression of the cantons.[8]

Each department has a coat of arms with which it is commonly associated, though not all are officially recognised or used.

Former departments of the current territory of France 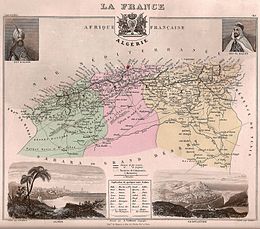 The three Algerian departments in 1848 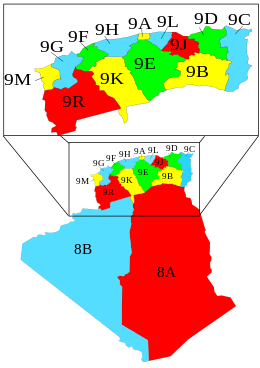 Unlike the rest of French-controlled Africa, Algeria was divided into overseas departments from 1848 until its independence in 1962. These departments were supposed to be "assimilated" or "integrated" to France sometime in the future.

Departments of the Napoleonic Empire in Europe

There are a number of former departments in territories conquered by France during the French Revolution and Napoleonic Empire that are now not part of France: