Discman was Sony's brand name for portable CD players. The first Discman, the Sony D-50 or D-5 (in some regions), was launched in 1984. The brand name has since been changed to CD Walkman, initially for Japanese lineups launched between October 1997 and March 1998.[1]

Prior to the development of the Compact Disc, cassette tapes were the dominant form of audio storage in regards to the then-fledgling portable audio industry. In 1979, Sony had introduced the Walkman in Japan.[2] As Sony began to realize the potential of the CD, executives pushed for a means to give the CD player market momentum, moving it from audio enthusiasts to the mainstream.

Building on the design of the CDP-101 CD player, which was launched in 1982, Sony worked towards both improving the design of the player, reducing the power and number of parts needed while decreasing the overall size of the player, as well as reducing the cost of the player to a 50 000 - 60 000 yen range in what was called the "CD CD Project", which stood for Compact Disc Cost Down Project. With the ability to produce a CD player one-tenth the size of its first unit by August 1983, there became potential for a portable player.[citation needed]

The original goal was to create a player that was the equivalent size of four CD cases stacked on top of each other. A piece of wood 13.4 cm across and about 4 cm thick was shown to the staff to illustrate the physical dimensions for which they were aiming. The finalized design did not incorporate a power source and so had a 9V (positive outer) coaxial jack on the rear. This allowed for the use of a wall adapter, the EBP-9LC, a carrying sleeve which held 6 primary C cells or rechargeable cells with the ability to charge in-situ. Alternatively, the AC D50 was available which attached to the rear of the D-5/D-50 and allowed it to be powered from AC at 110/120/220/240 V 50/60 Hz 9 W with a DC output of up to 500 mA. The AC D50 also allowed line level audio out, presented as two RCA jacks.[citation needed] 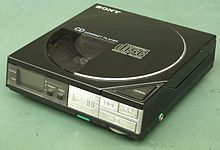 The D-50/D-5 was launched in November 1984, two years after mass production of CDs began. The unit offered the same functionality as the full-size CDP-101 player, but came without a remote and the repeat functionality of the full-size unit. The D-50/D-5 retailed for 49,800 yen [3] ($350 in 1984), approximately half the cost price of the CDP-101. The unit successfully sparked public interest in CDs, boosting their popularity, and within a year and a half the D-50/D-5 became profitable.[citation needed]

Early production units of the D-50/D-5 do not bear the Discman brand and were referred to as CD Compact Player.[4] The Discman brand was then given to the D-50/D-5 because of its portable nature and similarity to the Walkman. Since then, the brand name has been used to refer to Sony's portable CD players until 1997.

The release of the D-50/D-5 sparked public interest in CDs as an audio format and in the audio industry in general. A portable CD market was created and the price of competing CD players from other manufacturers dropped. The CD industry experienced sudden growth with the number of CD titles available dramatically increasing.[citation needed]

Intelligent Discman was a line of Discman players that played CD-i format discs.[5]