Dunedin Hospital is the main public hospital in Dunedin, New Zealand. It serves as the major base hospital for the Otago and Southland regions with a potential catchment radius of roughly 300 kilometres, and a population of around 300,000.

Dunedin Hospital is New Zealand's largest hospital south of Christchurch.[1] Patients are transferred or sent to this tertiary level care hospital from smaller secondary care hospitals across Otago and Southland including Dunstan Hospital in Clyde, Lakes District Hospital in Queenstown and Oamaru, Gore and Invercargill hospitals. Dunedin Hospital is the major trauma centre for the Otago region and the tertiary major trauma centre for the Otago and Southland regions.[2] 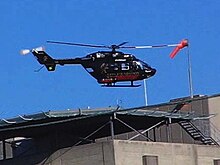 The Otago Regional Rescue Helicopter taking off from the hospital helipad

The Ward Block building has a helipad on the roof of the northeast corner (ICAO: NZDH).[5] The building was designed with consideration for a helipad, and, after substantial fundraising, one was built on the roof in circa 2000. The hospital helipad improves patient care, reducing the need for ambulance transfers between a remote helipad and the hospital. Due to CAA safety requirements, only "Performance Class One" (twin-engined) helicopters are allowed to land on the hospital.[5]

The original hospital was built at The Octagon in 1851, and moved to the site of the present hospital in 1865.[6]

In March 2007 two wards of the hospital were closed due to a suspected outbreak of norovirus, thought to have been brought in by a patient.[7] On 16 August 2008 the hospital was put in lockdown for one week due to a norovirus outbreak affecting 73 patients and nearly 100 staff, blocking most visitors for the duration, and postponing 2,300 procedures.[8][9][10]

Parts of the hospital are significantly dated, especially the Clinical Services Block (erected 1965) which was constructed with asbestos, as was standard construction practice at the time. The Clinical Services Block has also had significant maintenance issues, such as asbestos and leaks in the roof which allowed rain water to seep into the main operating theatres during a storm.[11] As a result of these and other issues, a significant rebuild project is underway for the reconstruction of the entire hospital, headed by Pete Hodgson, at an estimated cost of $1.2 to 1.6 billion. It is estimated to be completed by 2028.[12]