The Dunedin Thunder, currently the Phoenix Thunder for sponsorship reasons, is an ice hockey team based in Dunedin, New Zealand and are members of the New Zealand Ice Hockey League. The club plays their home games at the Dunedin Ice Stadium. The Thunder were founded in 2008 and joined the league as an expansion team. The clubs won their first regular season title in 2013 and have finished as runner-up in the playoffs in 2013 and 2014, losing on both occasions to the Canterbury Red Devils. 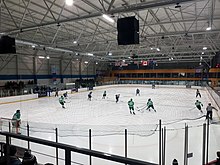 The Dunedin Thunder playing against the West Auckland Admirals, July 2021