The Royal Netherlands Navy (Dutch: Koninklijke Marine) is the naval force of the Kingdom of the Netherlands.[2] Its origins date back to the Eighty Years' War (1568–1648), the war of independence from the House of Habsburg who ruled over the Habsburg Netherlands.

During the 17th century, the navy of the Dutch Republic (1581–1795) was one of the most powerful naval forces in the world and played an active role in the Anglo-Dutch Wars, the Franco-Dutch War, and wars against Spain and several other European powers. The Batavian Navy of the later Batavian Republic (1795–1806) and Kingdom of Holland (1806–1810) played an active role in the Napoleonic Wars, though mostly dominated by French interests.

After the establishment of the modern Kingdom of the Netherlands, it served an important role in protecting Dutch colonial rule, especially in Southeast Asia, and would play a minor role in World War II, especially against the Imperial Japanese Navy. Since World War II, the Royal Netherlands Navy has taken part in expeditionary peacekeeping operations.

The main naval base is in Den Helder, North Holland. Secondary naval bases are in Amsterdam, Vlissingen, Texel, and Willemstad (Curaçao). Netherlands Marine Corps barracks are in Rotterdam, Doorn, Suffisant on Curaçao, and Savaneta on Aruba.

Officers of the Nederland Navy are trained at the Koninklijk Instituut voor de Marine ("Royal Naval Institute"), which is part of the Nederlandse Defensie Academie ("Netherlands defence academy") in Den Helder.[3] Around 100–150 people start training every year.

The modern Netherlands Navy dates its founding to a "statute of admiralty" issued by Holy Roman Emperor Maximilian I on 8 January 1488.[6] Naval historians trace the origins of an independent Dutch navy to the early stages of the Eighty Years' War (1568–1648) while the formation of a "national" navy is dated to the establishment of the Dutch Republic in 1597.[7]

The Netherlands navy was involved in several wars against other European powers from the late 16th century, initially for independence against Spain in European waters, later for shipping lanes, trade and colonies in many parts of the world, notably in four Anglo-Dutch wars against England. During the 17th century the Dutch navy was one of the most powerful navies in the world. As an organization, the navy of the Dutch Republic consisted of five separate admiralties (three of them in Holland, and one each in Friesland and Zeeland), each with its own ships, personnel, shipyards, command structures and revenues.[8] 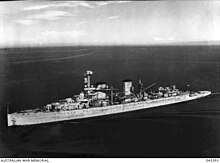 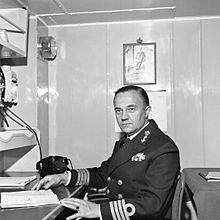 At the start of WW2 the Dutch had five cruisers, eight destroyers, 24 submarines, and smaller vessels, along with 50 obsolete aircraft. The Netherlands was conquered in 1940 by Nazi Germany in a matter of days, and two Dutch light cruisers and one destroyer leader and three destroyers that were under construction were captured in their shipyard.

For the rest of the war, the Dutch navy was based in Allied countries: the Dutch navy had its headquarters in London, and smaller units in Ceylon (modern day Sri Lanka) and Western Australia. Around the world Dutch naval units were responsible for transporting troops, for example during Operation Dynamo at Dunkirk and on D-Day, they escorted convoys and attacked enemy targets. Dutch submarines scored some victories, including one on a Kriegsmarine U-boat U-95 in the Mediterranean Sea, which was sunk by O 21, but during the war the Dutch Navy suffered heavy losses, particularly in the Pacific Theatre.

A small force of submarines based in Western Australia sank more Japanese ships in the first weeks after Japan joined the war than the entire British and American navies together during the same period, an exploit which earned Admiral Helfrich the nickname "Ship-a-day Helfrich".[9] The aggressive pace of operations against the Japanese was a contributing factor to both the heavy losses sustained and the greater number of successes scored as compared to the British and Americans in the region.

But during the relentless Japanese offensive of February through April 1942 in the Dutch East Indies, the Dutch navy in Asia was virtually annihilated, particularly in the Battle of the Java Sea (27 February 1942) in which the commander, Karel Doorman, went down with his fleet along with 1,000 sailors. The Navy sustained losses of a total of 20 ships (including two of its three light cruisers) and 2,500 sailors killed in the course of the campaign.[10] The Dutch navy had suffered from years of underfunding and came ill-prepared to face an enemy with more and heavier ships with better weapons, including the Long Lance-torpedo, with which the cruiser Haguro sank the light cruiser HNLMS De Ruyter.[11]

After the war, the relations between the Netherlands and its colonies changed dramatically. The establishment of the Republic of Indonesia, two days after the Japanese surrender, thwarted the Dutch plans for restoring colonial authority. After four years of war the Netherlands acknowledged the independence of Indonesia.

Part of the Dutch Navy was next stationed in Netherlands New Guinea until that, too, was turned over to the Indonesian government in 1962. This followed a campaign of infiltrations by the Indonesian National Armed Forces, supported by modern equipment from the Soviet Union, that was nevertheless successfully repulsed by the Dutch navy. These infiltrations took place after the order of President Sukarno to integrate the territory as an Indonesian province.

With the creation of the North Atlantic Treaty Organisation, the military focus was on the army and air force; it was not until the Korean War (1950–53) that the navy got more recognition. The government allowed the creation of a balanced fleet consisting of two naval squadrons. Apart from the aircraft carrier HNLMS Karel Doorman the Dutch navy consisted of two light cruisers (two De Zeven Provinciën class), 12 destroyers (four Holland class, eight Friesland class), eight submarines, six frigates ( van Speijk-class frigates), and a considerable number of minesweepers.

As a member of NATO, the Netherlands developed its security policy in close cooperation with other members. The establishment of the Warsaw pact in 1955 intensified the arms race between West and East. Technical innovations rapidly emerged, the introduction of radar and sonar were followed by nuclear weapon systems and long-range missiles. The geopolitical situation allowed for a fixed military strategy. Beginning in 1965, the Dutch Navy joined certain permanent NATO squadrons like the Standing Naval Force Atlantic.

Vice-Admiral Rob Kramer is the current Commander of the Royal Netherlands Navy.

The constituent parts of the Royal Netherlands Navy are:

Houses the submarines and a support vessel.

Mine Detection and Clearing Service

Note: in the Royal Netherlands Navy frigates are interchangeable with destroyers as there is no separate class

* The Royal Netherlands Navy classifies the De Zeven Provinciën-class as frigates, but internationally they are most comparable to destroyers (due to their size and weapon capability) platform for Sea Based Anti-Ballistic Missile defence

In 2012 an Apache attack helicopter from the Royal Netherlands Air Force made a deck landing on board HNLMS Rotterdam for the first time as part of an initial study into the possibilities for wider use of the helicopters as these will be upgraded to the AH-64E standard which has specific features for maritime operations.

In 2019 the fleet of the Royal Netherlands Navy consists of these ships:

The total tonnage will be approx. 140,000 tonnes. Next to these ships a lot of other smaller vessels remain in the navy.

With these changes the Royal Netherlands Navy will have 10 large oceangoing vessels ranging from medium/low to high combat action ships. The renewed Dutch Navy will be a green-water navy, having enough frigates and auxiliaries to operate far out at sea, while depending on land-based air support, and, with the large amphibious squadron, they will have significant brown-water navy capabilities.

In January 2020 women were allowed to join submarine crews in the Royal Netherlands Navy for the first time.[24]

In April 2018, the Dutch Government approved a multi-year investment program and allocated funds for the 2018–2030 period, including;

Together with the United States and several other NATO members, the Dutch Navy is testing and updating its ships for Tactical ballistic missile defense capability. Although tests conducted concerning the capability of the APAR (Active Phased Array Radar) have been very successful, in 2018 the Dutch Government approved plans to acquire the SM-3 missiles for integration into the existing weapon suite of the LCF frigates. The four LCF ships will be fitted out with eight SM-3 missiles each (they are provisioned for this VLS extension) through Foreign Military Sales (under discussion between the US and The Netherlands).