Enzyme assays are laboratory methods for measuring enzymatic activity. They are vital for the study of enzyme kinetics and enzyme inhibition.

The quantity or concentration of an enzyme can be expressed in molar amounts, as with any other chemical, or in terms of activity in enzyme units.

Enzyme activity = moles of substrate converted per unit time = rate × reaction volume. Enzyme activity is a measure of the quantity of active enzyme present and is thus dependent on conditions, which should be specified. The SI unit is the katal, 1 katal = 1 mol s−1, but this is an excessively large unit. A more practical and commonly used value is enzyme unit (U) = 1 μmol min−1. 1 U corresponds to 16.67 nanokatals.[1]

Enzyme activity as given in katal generally refers to that of the assumed natural target substrate of the enzyme. Enzyme activity can also be given as that of certain standardized substrates, such as gelatin, then measured in gelatin digesting units (GDU), or milk proteins, then measured in milk clotting units (MCU). The units GDU and MCU are based on how fast one gram of the enzyme will digest gelatin or milk proteins, respectively. 1 GDU equals approximately 1.5 MCU.[2]

Specific activity is a measure of enzyme processivity (the capability of enzyme to be processed), at a specific (usually saturating) substrate concentration, and is usually constant for a pure enzyme.

An active site titration process can be done for the elimination of errors arising from differences in cultivation batches and/or misfolded enzyme and similar issues. This is a measure of the amount of active enzyme, calculated by e.g. titrating the amount of active sites present by employing an irreversible inhibitor. The specific activity should then be expressed as μmol min−1 mg−1 active enzyme. If the molecular weight of the enzyme is known, the turnover number, or μmol product per second per μmol of active enzyme, can be calculated from the specific activity. The turnover number can be visualized as the number of times each enzyme molecule carries out its catalytic cycle per second.

The rate of a reaction is the concentration of substrate disappearing (or product produced) per unit time (mol L−1 s−1).

All enzyme assays measure either the consumption of substrate or production of product over time.[3] A large number of different methods of measuring the concentrations of substrates and products exist and many enzymes can be assayed in several different ways. Biochemists usually study enzyme-catalysed reactions using four types of experiments:[4]

Temperature-controlled cuvette holder in a spectrophotometer.

Continuous assays are most convenient, with one assay giving the rate of reaction with no further work necessary. There are many different types of continuous assays.

In spectrophotometric assays, you follow the course of the reaction by measuring a change in how much light the assay solution absorbs. If this light is in the visible region you can actually see a change in the color of the assay, and these are called colorimetric assays. The MTT assay, a redox assay using a tetrazolium dye as substrate is an example of a colorimetric assay.

UV light is often used, since the common coenzymes NADH and NADPH absorb UV light in their reduced forms, but do not in their oxidized forms. An oxidoreductase using NADH as a substrate could therefore be assayed by following the decrease in UV absorbance at a wavelength of 340 nm as it consumes the coenzyme.[7]

Even when the enzyme reaction does not result in a change in the absorbance of light, it can still be possible to use a spectrophotometric assay for the enzyme by using a coupled assay. Here, the product of one reaction is used as the substrate of another, easily detectable reaction. For example, figure 1 shows the coupled assay for the enzyme hexokinase, which can be assayed by coupling its production of glucose-6-phosphate to NADPH production, using glucose-6-phosphate dehydrogenase.

Fluorescence is when a molecule emits light of one wavelength after absorbing light of a different wavelength. Fluorometric assays use a difference in the fluorescence of substrate from product to measure the enzyme reaction. These assays are in general much more sensitive than spectrophotometric assays, but can suffer from interference caused by impurities and the instability of many fluorescent compounds when exposed to light.

An example of these assays is again the use of the nucleotide coenzymes NADH and NADPH. Here, the reduced forms are fluorescent and the oxidised forms non-fluorescent. Oxidation reactions can therefore be followed by a decrease in fluorescence and reduction reactions by an increase.[8] Synthetic substrates that release a fluorescent dye in an enzyme-catalyzed reaction are also available, such as 4-methylumbelliferyl-β-D-galactoside for assaying β-galactosidase or 4-methylumbelliferyl-butyrate for assaying Candida rugosa lipase.[9] 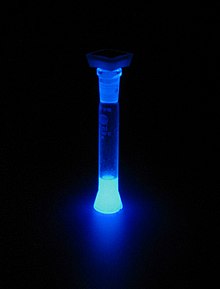 Calorimetry is the measurement of the heat released or absorbed by chemical reactions. These assays are very general, since many reactions involve some change in heat and with use of a microcalorimeter, not much enzyme or substrate is required. These assays can be used to measure reactions that are impossible to assay in any other way.[10]

Chemiluminescence is the emission of light by a chemical reaction. Some enzyme reactions produce light and this can be measured to detect product formation. These types of assay can be extremely sensitive, since the light produced can be captured by photographic film over days or weeks, but can be hard to quantify, because not all the light released by a reaction will be detected.

The detection of horseradish peroxidase by enzymatic chemiluminescence (ECL) is a common method of detecting antibodies in western blotting. Another example is the enzyme luciferase, this is found in fireflies and naturally produces light from its substrate luciferin.

Static light scattering measures the product of weight-averaged molar mass and concentration of macromolecules in solution. Given a fixed total concentration of one or more species over the measurement time, the scattering signal is a direct measure of the weight-averaged molar mass of the solution, which will vary as complexes form or dissociate. Hence the measurement quantifies the stoichiometry of the complexes as well as kinetics. Light scattering assays of protein kinetics is a very general technique that does not require an enzyme.

Microscale thermophoresis (MST)[11] measures the size, charge and hydration entropy of molecules/substrates at equilibrium.[12] The thermophoretic movement of a fluorescently labeled substrate changes significantly as it is modified by an enzyme. This enzymatic activity can be measured with high time resolution in real time.[13] The material consumption of the all optical MST method is very low, only 5 μl sample volume and 10nM enzyme concentration are needed to measure the enzymatic rate constants for activity and inhibition. MST allows analysts to measure the modification of two different substrates at once (multiplexing) if both substrates are labeled with different fluorophores. Thus substrate competition experiments can be performed.

Discontinuous assays are when samples are taken from an enzyme reaction at intervals and the amount of product production or substrate consumption is measured in these samples.

Radiometric assays measure the incorporation of radioactivity into substrates or its release from substrates. The radioactive isotopes most frequently used in these assays are 14C, 32P, 35S and 125I. Since radioactive isotopes can allow the specific labelling of a single atom of a substrate, these assays are both extremely sensitive and specific. They are frequently used in biochemistry and are often the only way of measuring a specific reaction in crude extracts (the complex mixtures of enzymes produced when you lyse cells).

Radioactivity is usually measured in these procedures using a scintillation counter.

Factors to control in assays 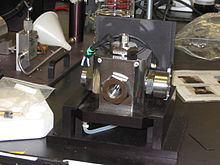 A pressure chamber for measuring enzyme activity at high pressure.

Several factors effect the assay outcome and a recent review summarizes the various parameters that needs to be monitored to keep an assay up and running.[15]