Not to be confused with Apophysis.
This article is about the rounded end of a bone. For information on the endocrine gland also referred to as epiphysis, see pineal gland.

There are four types of epiphysis:

Bones with an epiphysis

There are many bones that contain an epiphysis: 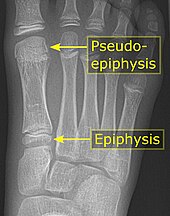 It is common in children to have a pseudo-epiphysis of the first metatarsal.[3]

A pseudo-epiphysis is an epiphysis-looking end of a bone where an epiphysis is not normally located.[4] A pseudo-epiphysis is delineated by a transverse notch, looking similar to a growth plate.[4] However, these transverse notches lack the typical cell columns found in normal growth plates, and do not contribute significantly to longitudinal bone growth.[5] Pseudo-epiphyses are found at the distal end of the first metacarpal bone in 80% of the normal population, and at the proximal end of the second metacarpal in 60%.[4]

Pathologies of the epiphysis include avascular necrosis and osteochondritis dissecans (OCD). OCD involves the subchondral bone.