The Euro-Atlantic Partnership Council (EAPC), a post–Cold War NATO institution, is a multilateral forum created to improve relations between NATO and non-NATO countries in Europe and those parts of Asia on the European periphery. States meet to cooperate and go to the range of political and security issues. It was formed on May 29, 1997 in the ministers meeting of Sintra, Portugal, as the successor to the North Atlantic Cooperation Council (NACC), which was created in 1991. It works alongside the Partnership for Peace (PfP), created in 1994. 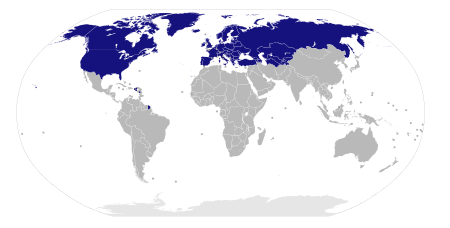 The USSR at the North Atlantic Cooperation Council

On 20 December 1991, the first meeting of the North Atlantic Cooperation Council, hosted a meeting between NATO, Eastern European nations and the USSR. Near the end of the meeting, the Soviet Ambassador received a message that concurrently to the meeting, the Soviet Union was dissolving and would cease to exist the following day. The Soviet Ambassador noted that as of then, he was only representing the Russian Federation and no longer the Soviet Union.[2]