The European Defence Agency (EDA) is an agency of the European Union (EU) that promotes and facilitates integration between member states within the EU's Common Security and Defence Policy (CSDP). The EDA is headed by the High Representative (HR/VP), and reports to the Council. The EDA was established on 12 July 2004 and is based in the Kortenberg building in Brussels, Belgium, along with a number of other CSDP bodies. 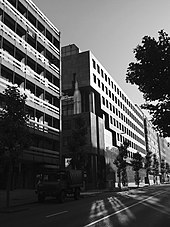 All EU member states take part in the agency, except Denmark, which has opted out of the CFSP.[2]

The EDA and the European External Action Service (EEAS) together form the Secretariat of the Permanent Structured Cooperation (PESCO), the structural integration pursued by 25 of the 27 national armed forces of the EU since 2017.[3]

The Council established the EDA "to support the Member States and the Council in their effort to improve European defence capabilities in the field of crisis management and to sustain the European Security and Defence Policy as it stands now and develops in the future”. Within that overall mission are four functions;[4]

The tasks have been distilled into four strategies:[5]

The Agency is monitored and managed in three ways.[2]

The EU High Representative (HR), currently Josep Borrell, acts as the Head of the EDA. The Head is responsible for overall organisation and functioning, ensures implementation of guidelines and decisions and chairs ministerial meetings of Steering Board.

HR Javier Solana was the inaugural head of the EDA, a position which he maintained from 2004 to 2009.

The Chief Executive Officer, appointed by the HR, is the agency's head of staff, responsible for supervision and co-ordination of units.[8]

The post of chief executive was vacant from October 2010 until January 2011, when HR Catherine Ashton appointed Claude-France Arnould in succession to Alexander Weis.[12] It was reported that this nomination had been blocked by the Italian government of Enrico Letta which wished to see its own candidate take up the post.[13]

In 2020 Olli Ruutu was appointed Chief Executive ad-interim by the High Representative / Vice President and Head of the European Defence Agency (EDA) Josep Borrell.[14] His mandate began on 1 February 2020 and will run until the appointment of a new Chief Executive. On 5 March 2020 the EDA Steering Board appointed Jiří Šedivý, former Czech Defence Minister, as new EDA Chief Executive upon recommendation of the Head of the European Defence Agency Josep Borrell. He will take office in April 2020.[15]

Up until 31 December 2013 the agency was organised into five directorates: Capabilities, Armaments, Industry & Markets, Research & Technology, and Corporate Services.[16]

On 1 January 2019 the agency was reorganised into three directorates:[17]

The Industry Synergies & Enablers Directorate supports a range of activities critical to collaborative defence capability development in Europe. On top of leading the work on identifying, together with Member States, Key Strategic Activities (KSA) at EU level, the ISE Directorate is responsible for the effective engagement with industry across the Agency’s activities and in support of related priorities set by Member States.

The ISE Directorate facilitates work to address the implications of EU legislation and policies for the defence sector: REACH, procurement, funding instruments and the analysis of developments influencing governmental and industrial stakeholders.

The Research, Technology & Innovation Directorate promotes and supports defence research at EU level. Based on the Overarching Strategic Research Agenda (OSRA), developed together with the Member States, the Directorate coordinates and plans joint research activities and the study of technical solutions to meet future operational needs.

The RTI Directorate provides support to Member States and to the European Commission for the Preparatory Action for defence research, including its implementation, and the research dimension of the European Defence Fund. The Directorate also ensures the promotion of innovation in defence and the exploitation of synergies at EU level with civil research in dual-use technology fields.

The Directorate is in charge of elaborating the Capability Development Plan, based on the analysis of military requirements conducted together with Member States. It also identifies output- oriented EU capability development priorities and coordinates the development of Strategic Context Cases to facilitate the implementation of these priorities.

The agency is financed by its members in proportion to their Gross National Income. An effect of this is that some nations pay different contributions towards the budgets than others. For example, in 2007[18] the biggest budgetary contributor was Germany at a cost of €4,202,027 followed by the United Kingdom paying €3,542,487, and France paying €3,347,139.

In its draft budget for the period 2021-2027, the European Commission will allocate €27.5 billion for defence and security.[20]

Further information: History of the Common Security and Defence Policy 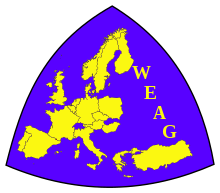 Emblem of the Western European Armaments Group, one of the EDA's precursors

The European Defence Agency is part of several decades of steadily more formal defence cooperation in Europe. Its work is a continuation of the work of the Western European Armaments Organization (WEAO) and the Western European Armaments Group (WEAG) – it effectively represents the transference of their functions from the WEU to the EU framework, and thus continues the decommissioning of the WEU. It may also be seen as growing out of the Eurofighter Typhoon project, and other collaborative defence efforts.

Initially and up until 31 December 2013 the agency was organised into five directorates.[16] On 20 November 2013 a new streamlined organisational structure, listed below, was announced which came into force on 1 January 2014.[21]

At a European Council meeting on 19 December 2013, a European Air Force (EAF) consisting of surveillance drones, heavy transport airplanes, and air-to-air refuelling planes was debated.[22] This EAF was proposed by the External Action Service of HRUFASC Catherine Ashton, and was seconded by President of the European Parliament Martin Schulz.[23] The EAF proposal was supported by Hollande, Rajoy, Letta, Tusk and Merkel who together have QMV majority on the Council. The debate was joined with a view presented by NATO Secretary General Anders Fogh Rasmussen, who maintained that "Nato will remain the bedrock of Euro-Atlantic security".[22] Rasmussen's view prevailed on the Council at this time because QMV did not take effect in Council decisions until 1 November 2014.

The Agency signed Administrative Arrangements with Norway (2006),[24] Switzerland (2012), Serbia (2013) and Ukraine (2015) enabling them to participate in EDA's projects and programmes without exercising voting rights. All Administrative Arrangements are approved by the European Council. The Head of the Agency is responsible for negotiating these arrangements in accordance with directives given by the EDA Steering Board.[25]

A transcript of the European Commission represented by Michel Barnier at the Berlin Security Conference stated that "[after its withdrawal from the union] the United Kingdom will, as is its wish, become a third country when it comes to defence and security issues" and that "the UK will no longer be a member of the European Defence Agency or Europol".[26]