For the suburb of Hamilton, New Zealand, see Fairfield, Waikato

Fairfield is a suburb of Dunedin, New Zealand.

Fairfield lies in rolling hill country, close to the slopes of Saddle Hill and Scroggs Hill. The name Fairfield was originally given as a descriptive name by early European settler William Martin to his farm property, located close to where the town now stands.[1]

Until 2000, Fairfield was located on State Highway 1, but is now on a bypass of the Dunedin Southern Motorway. Fairfield is situated about 11 km (7 mi) west-southwest of the Octagon, Dunedin's city centre. 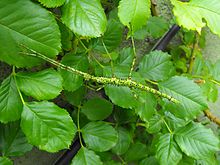 The rare Acanthoxyla prasina, or prickly stick insect, is resident in Fairfield.[3]