In mountaineering, a first ascent (abbreviated to FA in guide books) is the first successful, documented attainment of the top of a mountain or the first to follow a particular climbing route. First mountain ascents are notable because they entail genuine exploration, with greater risks, challenges and recognition than climbing a route pioneered by others. The person who performs the first ascent is called the first ascensionist. 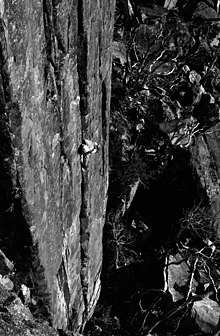 In free climbing, a first ascent (or first free ascent, abbreviated FFA) of a climbing route is the first successful, documented climb of a route without using equipment such as anchors or ropes for aiding progression or resting.

The details of the first ascents of even many prominent mountains are scanty or unknown; sometimes the only evidence of prior summiting is a cairn, artifacts, or inscriptions at the top. Today, first ascents are generally carefully recorded and usually mentioned in guidebooks.

The term is also used when referring to ascents made using a specific technique or taking a specific route, such as via the North Face, without ropes or without oxygen.

In rock climbing, some of the earlier first ascents, particularly for difficult routes, involved a mix of free and aid climbing. As a result, purist free climbers have developed the designation first free ascent (FFA) to acknowledge ascents intentionally made more challenging by using equipment for protection only.

Second ascents are also noteworthy in climbing circles, frequently involving improving on a pioneering route through lessons learned from it, experience which may span from technical improvements to having a better understanding of how much gear and provisions to take.

Some other "first ascents" could be recorded for particular mountains or routes. One is the First Winter Ascent, which is, as the name easily suggests, the first ascent made during winter season. This is most important where the climate of winter is a factor in increasing the difficulty grade of the route (higher elevation, polar latitudes). In the Northern Hemisphere conventional winter ascents are made between December 21 and March 21 and are not related to the conditions.[1] Also in the Himalayan area, although Nepal and China's winter season permits start on December 1, the conventional winter ascents begin on December 21.[2][3]

Another is the First Solo Ascent, which is the first ascent made by a single climber. This is most important on high-level rock climbing, when the climber has to provide his own security (self-belaying) or even when climbing without any protection at all (often recorded as First Free Solo Ascent). Another type of ascent, also known as FFA (not to be confused with First Free Ascent as listed above) is the first female ascent. While not generally considered as important, this designation remains significant on some difficult, limit-pushing climbs, where the first female ascent may not happen until well after the FA, due to possible difficulties encountered by female physicality.[citation needed]

The term last ascent has been used to refer to an ascent of a mountain or face that has subsequently changed to such an extent – often because of rockfall – that the route no longer exists (e.g., the south-west face of the Aiguille du Dru in the Alps). It can also be used facetiously to refer to a climb that is so unpleasant or unaesthetic (due to loose rock, excessive brush, poor route selection, etc.) that no one would ever willingly repeat the first ascent party's ordeal.