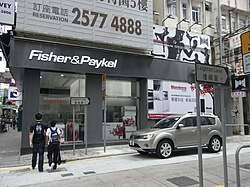 Originally an importer of domestic refrigerators,[3] Fisher & Paykel now holds over 420 patents[4] and bases its identity on innovative design, particularly in the areas of usability and environmental awareness.[5]

Fisher & Paykel had grown into a global company operating in 50 countries and manufacturing in Thailand, China, Italy and Mexico.[7] The company had a manufacturing base in Australia for almost 20 years and nearly 70 years in New Zealand, but stated it can no longer compete with low cost labour countries and had to close them.[8][9]

Fisher & Paykel Industries Ltd was founded in 1934 by Sir Woolf Fisher and Maurice Paykel.[3] The company publicly listed in 1979 with authorised capital of NZ$ 40 million.

Initially the company was an importer of Crosley appliances, Maytag and Pilot products; in 1938 the company began manufacturing Kelvinator washing machines under license. This followed the introduction of tariffs by the First Labour Government of New Zealand.[11]

The company began exporting within Australasia and East Asia around 1968. At that time the company also manufactured cabinets, sparkplugs and televisions.

During the 1980s, the company became more focused on research and development,[3] resulting in the development of the ECS direct drive mechanism washing machine and highly automated production lines.[11] In 1989, the company opened its first overseas manufacturing facility in Cleveland, Australia.

In June 2006, the Italian cookware business Elba was acquired from DeLonghi for €78 million (NZ$158 million).[12] Elba has been since renamed as Fisher & Paykel Appliances Italy S.p.A.[1] and exports to over 54 countries, focusing on the UK market.

There revolutionary Smartdrive top loading washing machine was created in 1990. It allowed the washing machine to vary the wash performance depending on the load size and fabric type. It also required fewer moving parts because it didn’t require a belt or a transmission or clutch like other machines back then and today still require. This technology was later introduced to the front loader line up.