It has three main business units:

In 1909 James Fletcher senior, a builder and stonemason from Scotland, began a building business along with Englishman Albert Morris. The firm was known as Fletcher and Morris and received their first commission on 1 June 1909. This was for a double bay wooden villa at Broad Bay on the Otago Peninsula and was built for £375 (New Zealand still used British pounds at that time). The house was occupied on 10 November 1909 by local merchant Hubert Green following his marriage to Agnes Galloway. However, they made no profit in this venture.[2] It later became Fletcher Bros.[3] The house, now known as Fletcher House, still stands and is open to the public.[4] However, despite being bailed out by friends their company made a net loss and they had to cease trading in 1910. In January 1911 they revitalised the firm with a bit more financial acumen, building houses in Abbotsford and south Dunedin. In March 1911 they started their first workshop: on Cameron Street next to the railway.[5]

In the summer of 1911 the firm was joined by James' brother William John Fletcher, who was a trained stonemason. He invested $1000 to become an equal partner. On 24 November 1911 they received their first larger (non-domestic) commission: a Coronation Hall for the St Kilda district. This was designed by local architects Mason & Wales.[6] 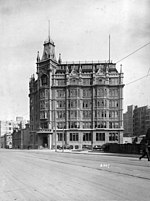 The company was renamed Fletcher Brothers in May 1912 after the departure of Bert Morris, who took fright at their first truly large project: Knox College, Otago. This contract was received through James' in-law Rev Andrew Cameron who was chairman of the building committee.[6]

The company was registered as a limited liability company in May 1916.

In 1917 they renewed their link to architects Mason & Wales in the building of the 102 bed Nurses Home for Otago Hospital.

In 1925 the company headquarters was moved to Auckland, and in 1940 Fletcher Construction became a subsidiary of the Fletcher Holdings group, which listed on the share market that year.[3] In 1942, following the resignation of his father to help New Zealand's war effort, James Fletcher junior became managing director of the company. Fletcher junior placed a greater emphasis on the firms building products manufacturing divisions, with Fletcher Construction retaining the core construction business.[7]