As of 2004, the U.S. Navy and at least 29 other navies had used a total of more than one thousand LM2500/LM2500+ gas turbines to power warships.[1] Other uses include hydrofoils, hovercraft and fast ferries.

In 2012, GE developed an FPSO version to serve the oil and gas industry's demand for a lighter, more compact version to generate electricity and drive compressors to send natural gas through pipelines.[2] 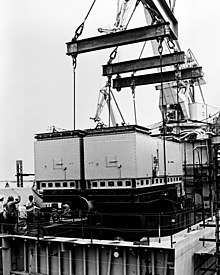 The LM2500 was first used on the US Navy GTS Admiral W. M. Callaghan in 1969, after the original FT-4 gas turbines experienced many technical problems.[3] Later, they were used in US Navy warships in the Spruance class class of destroyers and the related Kidd class, which were constructed from 1970. In this configuration it was rated to 21,500 shp (16,000 kW). This configuration was subsequently used into the 1980s in the Oliver Hazard Perry-class frigates, and Ticonderoga-class cruisers. It was also used by one of People's Republic of China's Type 052 Luhu Class Missile Destroyer (Harbin 112) acquired before the embargo.

LM2500 installations place the engine inside a metal container for sound and heat isolation from the rest of the machinery spaces. This container is very near the size of a standard 40-foot (12 m) intermodal shipping container - but not the same, the engine size very slightly exceeds those dimensions. The air intake ducting may be designed and shaped appropriately for easy removal of the LM2500 from their ships.

The LM2500+ is an evolution of the LM2500, delivering up to 40,200 shp (30,000 kW) or 28.6 MW of electric energy when combined with an electrical generator. Two of such turbo-generators have been installed in the superstructure near the funnel of Queen Mary 2, the world's largest transatlantic ocean liner, for additional electric energy when the ship's four diesel-generators are working at maximum capacity or fail. Celebrity Cruises uses two LM2500+ engines in their Millennium-class ships in a COGAS cycle.

The LM2500/LM2500+ can often be found as turbine part of CODAG, CODOG, CODLAG propulsion systems or in pairs as powerplants for COGAG systems.

The LM2500 is available in 3 different versions: