The Gentse Feesten (Dutch pronunciation: [ˈɣɛntsə ˈfeːstə(n)]; In Ghent dialect Gense Fieste "The Ghent Festival") is a music and theatre festival in the city of Ghent, Belgium. Besides stage events there are street acts such as mimes and buskers. The festival starts on the Friday before the third Sunday of July and lasts until and including the fourth Sunday of July. The date originally had no reference to July 21st, Belgium's national holiday, but that holiday is always included. The festival starts on "the (Fri)day before the Saturday before July 21st" and lasts ten days. The last day (always a Sunday) is known as de dag van de lege portemonnees ("the day of the empty wallets") alluding to the fact that many people have spent their last penny at the festival and is seen by the people of Ghent as "their" day while visitors leave.

The first Gentse Feesten was held in 1843, about 400 people attended. The intensity of the festivities changed throughout the years. The modern Gentse Feesten was started in the summer of 1969 by Ghent singer Walter De Buck and ex-wife Paula Monsart with people from Café Trefpunt.

In the beginning the festival consisted of one stage near the Saint Jacobs Church. Since the late eighties the festival has grown now covers the whole inner city of Ghent. Although the festival has become a mass event, it has retained some of the rebellious and anarchistic atmosphere of the early days.

About 2 million visitors attend the festival every year, making it one of the biggest cultural and popular festivals in Europe. The number of visitors on top nights surpasses 250,000. In a 2005 ranking by localfestivities.com,[1] the Gentse Feesten was called the third biggest city festival in Europe, preceded by the Fallas in Valencia and the Oktoberfest in Munich.

Festivals within the Gentse Feesten 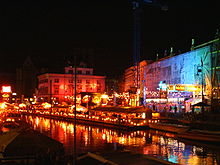 Traditionally the shows at the festival have been free, but in later years a number of side festivals have chosen the period of the Gentse Feesten to organize separate events.