George Street is the main street of Dunedin, the second largest city in the South Island of New Zealand. It runs for two and a half kilometres north-northeast from The Octagon in the city centre to the foot of Pine Hill. It is straight and undulates gently as it skirts the edge of the hills to its northwest. South of The Octagon, Princes Street continues the line of George Street south-southwest for two kilometres. 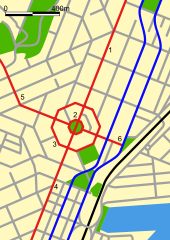 In the early years of Dunedin's settlement, much of the city's growth was on two areas of reasonably flat land close to the harbour, separated by the large Bell Hill and an area of low swampy land. The northern of these two flat areas surrounded the floodplain of the Water of Leith, a small river that runs through Dunedin. As the city grew the swamp was drained to become the new city's centre, and the hill was lowered by excavation to allow access between the two areas of settlement. A street grid was set up with the main road split in two by the city centre (now The Octagon) - Princes Street to the south and George Street to the north. Both these names, along with many of the city's other street names, reflect those in Edinburgh, Scotland.

In the settlement's early days, Bell Hill proved a major obstacle to travel south of the city centre, and major excavation work was carried out to provide access to the south. A cutting was made in the hill in 1858, and during the 1860s the hill was lowered by some 14 metres (46 ft), much of the rubble forming the start of the Southern Endowment, a large area of land reclaimed from the Otago Harbour to the southeast of the city centre.[1] Once the cut was completed, Princes Street quickly became the city's central business district, especially the area between the original docks (now the Exchange area) and around the cutting. Increased development to the north of the Octagon saw a slow but inexorable drift of the city's business heart to George Street, a trend possibly accelerated by the growth of the city's tertiary education sector, especially the University of Otago. Much of the city's economic and retail heart now lies between the University and the Octagon in the first few blocks of George Street and in the streets which cross it (notably Hanover Street and St. Andrew Street), and the two roads which run parallel to either side of George Street (Filleul Street to the west, and Great King Street to the east).

The ornate doorway of 310 George Street is a major feature of this historic building.

Until the early years of the 20th century, George Street stopped at the banks of the Leith at its northern end. A bridge, built in 1903, was one of few in the city to survive disastrous floods in March 1929.[2] This bridge, simply known as George Street Bridge, is registered as a Category II historic structure by Heritage New Zealand.[3]

Looking south toward the city centre

George Street is an interesting mix of different types of property. The southern kilometre is taken up by Dunedin's CBD, with the city's civic centre and library occupying much of the first block (the majority of blocks are 200 metres long). In early 2018, Barnes Dance crossings were introduced at either end of this block, at George Street's intersections with The Octagon and Moray Place.

Beyond this is a major shopping precinct, including Dunedin's largest shopping mall, the Meridian Mall. As the street approaches the northern end of its shopping area, many of the shops have a Southeast Asian flavour, in part due to the large proportion of Malaysian and Chinese students at the University of Otago, some 500 metres to the east.

At the northern end of the main shopping area the skyline is dominated by the spire of Knox Church, designed by R. A. Lawson. Beyond this is a mix of older residential houses and hotels. Many of Dunedin's more attractive inner city properties are at the north end of the street, quite a number of which have been divided up as student flats.

Close to the street's northern end is the entrance to Woodhaugh Gardens, a major park, which lies to the west of George Street along the south-western bank of the Leith. Shortly after crossing the Leith, George Street ends, after passing under the Pine Hill Extension (part of State Highway 1). Beyond this bridge the street becomes Bank Street, a suburban arterial road, turning to the east before reaching a major junction at The Gardens.