Germania Inferior ("Lower Germania") was a Roman province from AD 85 until the province was renamed as Germania Secunda in the fourth century. Located on the west bank of the Rhine and bordering the North Sea, the capital of the province was Colonia Agrippinensis (modern-day Cologne). 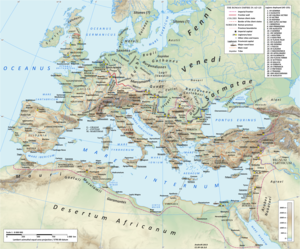 The Roman empire in the time of Hadrian (ruled 117–138), showing, on the lower Rhine river, the imperial province of Germania Inferior (NW Germany/S. Netherlands, E. Belgium), and the three legions deployed there in 125. Note that the coast lines shown in the map are those of today, known to be different from those in Roman times in the North Sea area.

According to Ptolemy (2.9), Germania Inferior included the Rhine from its mouth up to the mouth of the Obringa, a river identified with either the Aar or the Moselle.[1] The territory included modern-day Luxembourg, the southern Netherlands, part of Belgium, and part of North Rhine-Westphalia in Germany, west of the Rhine. 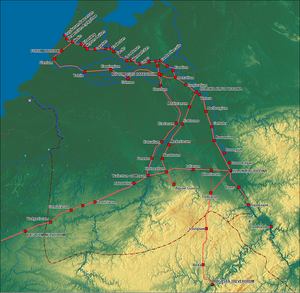 Borders of the Germania Inferior, with main roads and cities/forts

The first confrontations between a Roman army and the peoples of Germania Inferior occurred during Julius Caesar's Gallic Wars. Caesar invaded the region in 57 BC and in the next three years annihilated several tribes, including the Eburones and the Menapii, whom Caesar called "Germanic" but who probably were Celtic or at least mixed Celtic-Germanic. Germanic influence (mainly through the Tungri) increased during Roman times, leading to the assimilation of all Celtic peoples in the area.[citation needed]

Germania Inferior had Roman settlements since around 50 BC and was at first part of Gallia Belgica. Although it had been occupied since the reign of Augustus, it wasn't formally established as a Roman province until around AD 85, with its capital at Colonia Claudia Ara Agrippinensium (modern-day Cologne).[2] It later became an imperial province. It lay north of Germania Superior; these two together made up Lesser Germania. The adjective Inferior refers to its downstream position.

As attested in the early 5th century Notitia Dignitatum, the province was renamed Germania Secunda (Germania II) in the 4th century. It was administered by a consularis and formed part of the Diocese of Gaul. Up to the end of Roman control, it was an intensely garrisoned province that was inhabited by Romans and Ripuarian Franks in the 5th century. Its capital remained at Colonia Claudia Ara Agrippinensium, which also became the seat of a Christian bishopric, in charge of an ecclesiastical province that survived the fall of the Western Roman Empire.

After the final abandonment of the province it became the core of the Frankish Kingdom.