The gmina (Polish: [ˈɡmʲina], plural gminy [ˈɡmʲinɨ], from German Gemeinde meaning commune) is the principal unit of the administrative division of Poland, similar to a municipality. As of January 1, 2019, there were 2477 communes throughout the country, encompassing 940 cities and over 43,000 villages.[1] 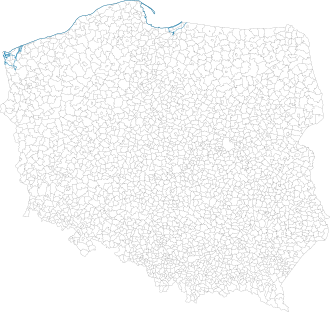 Division of Poland into gminy

The gmina has been the basic unit of territorial division in Poland since 1974, when it replaced the smaller gromada (cluster). There are three types of gminy:

Some rural gminy have their seat in a town which is outside the gmina's division. For example, the rural Gmina Augustów is administered from the town of Augustów, but does not include the town, as Augustów is an urban type gmina in its own right.

The legislative and controlling body of each gmina is the elected municipal council (rada gminy), or in a town: rada miasta (town assembly). Executive power is held by the directly elected mayor of the municipality, called wójt in rural gminy, burmistrz in most urban and urban-rural gminy, or prezydent in towns with more than 400,000 inhabitants and some others which traditionally use the title. A gmina may create auxiliary units (jednostki pomocnicze), which play a subordinate administrative role. In rural areas these are called sołectwa, in towns they may be dzielnice or osiedla and in an urban-rural gmina, the town itself may be designated as an auxiliary unit. The only gmina which is statutorily obliged to have auxiliary units is Warsaw, which is divided since 2002 into 18 boroughs of a status similar to the urban gminas, although they are not considered as separate division units. For a complete listing of all the gminy in Poland, see List of Polish gminas.

Three or more gminas make up a higher level unit called powiat. Each and every powiat has the seat in a city or town, which can be an urban gmina or be a part of an urban-rural one. However, several urban gminas that are the major Polish cities and towns (including all voivodeship seats) have the special status of urban powiats (miasto na prawach powiatu, powiat grodzki), and as of 2020 there are 66 of them. Such town or city is a separate single-gmina powiat and even if it is the seat of a regular one, it does not belong to it administratively. In the urban powiats, the roles of the powiat organs are fulfilled by the ones of the urban gmina it is made of.

Types of administrative tasks and objectives

Each gmina carries out two types of tasks: its own tasks and commissioned ones. Own tasks are public tasks exercised by self-government, which serve to satisfy the needs of the community. The tasks can be twofold:

Commissioned tasks cover the remaining public tasks resulting from legitimate needs of the state, commissioned by central government for the units of local government to implement. The tasks are handed over on the basis of statutory by-laws, charters and regulations, or by way of agreements between the self-government units and central-government administration.

Overall number of gminy by type